There is the cigar and pipe loophole, however. 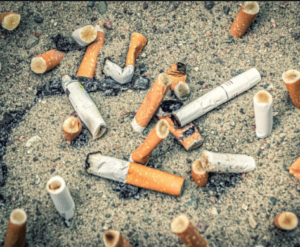 If you want to watch the rockets’ red glare on July 4 with a glowing cigarette, you won’t be able to do that in Fernandina Beach parks and on city beaches after final passage of the city’s beach smoking ban. The ban passed first reading Tuesday night by the City Commission.

Mayor Mike Lednovich posted on social media that he intended to use the power delegated by the Legislature to municipalities this year to enact a smoking ban.

“This business that you’re outdoors and smoke doesn’t impact you is a myth,” Lednovich said before the vote. “Thirteen feet — you can be 13 feet away, take one whiff of smoke. You are breathing in a toxin which adversely affects your health. So, No. 1, this is a public health issue.”

Lednovich is in a three-way re-election race for his Commission seat, while the only person running for Mayor on the ballot this time is Commissioner Bradley Bean.

A loose group of conservationists, health advocates and folks who don’t like their areas trashy have been working with municipalities and legislatures to enact these bans.

“Our volunteers know better than most people the impact of cigarette smoking on our beaches,” said Jan Cote-Merow, who spoke for the steering committee of local volunteer group Beach Ambassadors.

“Cigarettes are actually the No. 1 most common type of trash on city beaches. They’re also the most difficult to safely remove. We, as volunteers, can spend an hour or more picking up 50 to 100 cigarette butts. They not only foul the appearance of our beaches, but they cause real harm to humans and to animals.”

Commissioner David Sturges, who is a Beach Ambassador and walked the beach Monday evening for litter, agreed with Cote-Merow’s assessment of beach trash.

“I hate to remove people’s right to smoke, but it’s a public beach, and it’s atrocious for the animals, the turtles,” Sturges said.

The decision weighed on Bean as well.

“Even though I’m not a smoker, I still believe I should fight for individuals’ rights and individual choice, and I don’t think that we should be getting in that way,” Bean said.

He was the only “no” vote while the rest of the Commission voted to approve.

There is the cigar and pipe loophole, however.

“Smoking is a public health nuisance and is strictly prohibited in all City parks and on City beaches, with the exception of the smoking of cigars that do not contain a filter or plastic tip or the smoking of pipe tobacco in a pipe,” per the ordinance.

Sarasota Republican Sen. Joe Gruters said during the Session that his bill that allowed the ordinance, SB 224, is about freedom.

“It’s about freedom for tourists and individuals and giving the freedom of not having to put your hands in sand and pull out the ugly cigarette butts everyone sees in the sand,” he said.

Everyone talks about freedom to smoke on the beach, but what about my freedom to not experience cigarette butts and the smell of smoking on the beach. If we are so free why is the Supreme Court taking away the right of choice, ie, Roe v. wade. Men are still free to create an embryo but walk away from responsibility of impregnating women ad litem. Sowing your seeds has been an apt picture of of the life of men. Where’s the responsibility in all things where one’s action causes a reaction and a consequence.

Now everything is going to be about Roe? Cigarette butts, it’s all the man’s fault and the hits just keep coming.

WOW !!! that happened fast! It went from cigarette butts to blaming men for unwanted pregnancies. Not taking personal responsibility is the cause of cigarette butts being tossed away into the sand, and perhaps some other problems??????

I am not a smoker but Banning people from smoking on beach is a infringement on their freedom…just add more cigarette receptacles and post signs saying if caught littering on beach you pay 1k fine and that includes cigarettes! And then have someone patrol the beaches to make sure people are held accountable