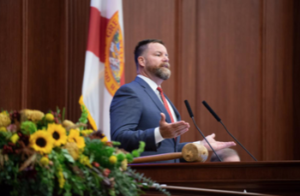 Fernandina Beach, Fla. – Republican candidate for Congressional District 4 Aaron Bean has announced another round of local endorsements, highlighting leaders from Duval County and the Northeast region who support his bid for Congress.

“On the heels of our sheriffs’ endorsement from Clay and Nassau Counties last week, I am so excited to announce the amazing roster of leaders from Duval County and our Northeast region who have endorsed my candidacy and have joined the Bean Team,” said Bean. “These great leaders have all served our community tirelessly, focusing on building up our Northeast region and putting the needs of our neighbors first. I am honored to have their support and take our shared commitment of conservative values to Washington to fight out-of-control gas prices, inflation and government overreach. I continue to be overwhelmed by the support from our area leaders from all three counties in CD 4, and I am ready to fight to win on Primary Election Day.”

The Duval County and regional leaders that have endorsed Bean include:

Bean currently represents the people of Nassau and Duval counties in the Florida Senate, serving in the Republican-led Senate as its Senate President Pro Tempore. Elected to the Senate in 2012 and to the Florida House before that, Bean has been a noted advocate for lowering taxes on hardworking Floridians and focusing on pro-business, pro-family initiatives and supporting the Florida freedom agenda and policies of Governor DeSantis. Bean has long served his local community, while raising a family and running a small business, with a focus on knowing what it means to work hard every day and on what his community needs.

For more information on the Aaron Bean for Congress campaign, visit AaronBean.com.

What’s his plan for dealing with inflation?