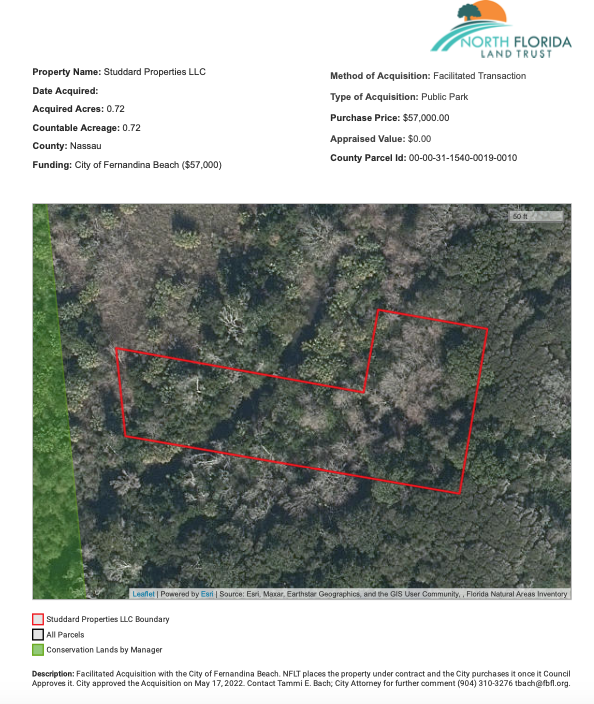 Jacksonville, Fla., May 26, 2022 – North Florida Land Trust has facilitated a purchase agreement on behalf of the City of Fernandina Beach for the acquisition of nearly one acre that could be added to the Egans Creek Greenway. The Fernandina Beach City Commission recently approved the option agreement to purchase 0.72 acres of land that is adjacent to City-owned conservation lands. NFLT handled the negotiations with Studdard Properties, Inc. for a purchase price of $57,000.

“The agreement we negotiated and the sellers signed will allow the city a few months to do their due diligence to purchase the property that will help expand their conservation holdings,” said Jim McCarthy, president of NFLT. “Preserving lands, no matter how small, are so important to the environmental health of the area. If we don’t save these natural spaces they could be lost to development and once they are gone, they are gone forever.”

The contract negotiated by NFLT allows the city three months to do the necessary tasks to complete the purchase. The money for the purchase will come from the city’s Land Conservation Fund which is funded through donations from the community and other sources. The property would be added to the Egans Creek Greenway which is a protected area of more than 300 acres that runs along Egans Creek. It is a natural space that provides a habitat for plant and animal species while also serving as a passive recreational park with a network of trails for walking and bicycling.

NFLT and the City of Fernandina Beach became partners in conservation in 2019 and have been working together to preserve land within the city limits. Since the partnership began, they have been able to preserve 20.74 acres of natural spaces that could have been lost to development.

North Florida Land Trust is a not-for-profit organization dedicated to preserving and enhancing the quality of life by protecting North Florida’s irreplaceable natural environment. Founded in 1999, NFLT has preserved tens of thousands of acres of land through the donation or purchase of land as well as conservation easements.  NFLT is funded largely by private and corporate contributions and works closely with willing landowners and public agencies at all levels of government, not-for-profit partners, and foundations. For more information, visit nflt.org.

Any conservation of undeveloped land is a good thing.

Using the arial photo and red box shown above, there is absolutely no way to determine where this property is. There is no, ZERO, locating information. That photo is useless. Come on you guys!