This upcoming election is the first major one the new requirements will be in force. 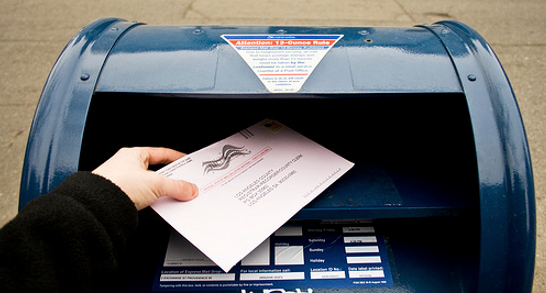 New voter identification requirements are going to be in force for the first time for a major election this year and, as a result, it’s likely some voters will be unable to vote by their preferred method.

Since the law (SB 90) went into effect last May, those who request an absentee ballot must provide either the last four digits of their Social Security number, driver’s license number or state identification card number in order to be current and eligible to vote by mail.

So far, only 10% of the voters missing that information in Broward County have responded to a request to provide it.

“You start asking people for their Social Security number and driver’s license number — those are two very, very critical things that individuals own that you don’t just openly share,” Osgood said.

“And we didn’t have to do that before to be registered to vote or request an absentee ballot,” Osgood added, labeling the requirement “more voter suppression.”

At the time the law was passed, however, Republicans said they were trying to make it as easy as possible to vote and as hard as possible to cheat. Voter fraud has rarely been detected in Florida, however, and Gov. Ron DeSantis in 2020 praised Florida’s voting administration immediately after the election.

Still, Republicans in Tallahassee passed the new restrictions on voting in 2021 and another set during the last Session.

“What we’re trying to do is make sure that we preserve our sacred duty and right of having every vote count,” Sen. Joe Gruters said when the law passed in 2021.

Broward County Supervisor of Elections Joe Scott said he’s seeing how it’s likely his office will have fewer votes to count in the Midterm Elections.

His office sent out some 73,000 letters to Broward County voters at the end of last year requesting the information to get a jump on the upcoming Primary Election in August. Among the 10% who replied, Scott heard from some who don’t want to provide that information.

That’s a tiny fraction of Broward’s 1.3 million voters, but Scott is concerned it will mean fewer voters in a county that decided a recent election by just five votes in the fall. Data from the last election shows 80% of the votes were cast by absentee ballots in Broward County.

The new requirements for absentee voting were among the parts of the law that drew a lawsuit from the League of Women Voters of Florida and other groups. But they were not among the items struck down when Chief U.S. District Judge Mark Walker ruled. That ruling generally lambasted the 2021 voting law as a discriminatory effort to keep minority voters from casting a ballot.

Walker’s ruling that threw out SB 90’s new regulations is under appeal and the law was reinstated as the appeal progresses. So tighter restrictions still stand this coming election for drop-off ballot boxes, third-party voter registration efforts and “line warming” with water and food for waiting voters.

That the new absentee voting requirements remained in effect this cycle disappointed Cecile Scoon, president of the League of Women Voters of Florida.

In response to the new identifying information requirements, varying degrees of outreach are being done with differing levels of success, county elections offices report.

Orange County sent out 13,168 letters asking for the identifying information in February and received replies from 11% of them.

Leon County reached out to 13,000 voters by mail in March and heard back from back from about 55% of them, according to Alex Mosca, spokesman for the Leon Elections Supervisor.

In Palm Beach County, 60,000 voters need to have their voter records updated with the identifiers and an outreach is planned.

It’s not that those who didn’t respond will not be able to vote.

“We wanted to do this proactive outreach to our voters, so that way, they (absentee voters) … wouldn’t be hit with those hurdles” as Election Day draws closer, Mosca said.

Elections offices are charged with verifying the identifying numbers with the names as they come in and a deluge could present a bottleneck, Mosca added.

Without the identifying information on their voter registration, voters are still eligible to cast their ballot in person, however.

Renzo Downey of Florida Politics contributed to this report.

The number of people who don’t participate in any of the activities you list far outweigh the number of verifiable instances of voter fraud. Hence, you have voter suppression. Harkens back to the days where only property owners were allowed to vote.

Exactly. Voting in this country needs to be secured with the ability to identify everyone casting a vote.

Yep…..my insurance company has my driver’s license number: my favorite car rental company has it in their system; the DHS has it for my Global Entry; etc…….oh, and when I show up to vote? They ask for my drivers license. If you want the easy, lazy route then you need to prove your identity just as I do in person. This is not a barrier, IMO.

good grief, what’s wrong with providing this info to prove who you are? we are relocating to the awesome state of Florida & both forms of ID are required to register a car, get insurance & a PO box.
Scott, Scoon are morons.

It’s just common sense to verify your identity whether you vote in person or by mail in or absentee ballot. I value my citizenship. It is my right to vote. (I wish all the states did this, and that their registration records were checked against other states to eliminate voting in more than one state.)

Every politician knows that the more barriers one can create for voting, the more it will impact poorer people, who are more often people of color, who more often (but not always) vote Democrat. There is a long history of making it impossible for people of color, especially Black people, to vote. Let’s not be delusional about these new voting restrictions: they are designed to frustrate and inhibit more Democrats from voting.

look at the voter turnout in Georgia, circle back on that voter suppression.
The old myth of Identification preventing people from voting has not panned out.