Posted on May 17, 2022May 17, 2022 by Press Release
By Creighton “Corky” Hoffman
May 17, 2022
Editor’s Note:  The following Q & A sent to the Fernandina Observer might answer some questions regarding the proposed 50-acre development on the South-End Amelia Island.  We are seeking rejoinders.  On Monday, May 23, at 6:00 p.m., the Nassau County Commission will meet at the James S. Page Government Complex to vote on the proposal. 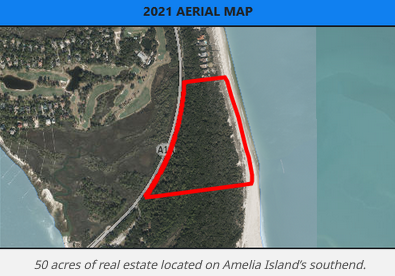 It’s the “forever and ever” language in the proposal that bothers me second, right after the 85 foot tower height.

Over time, new regulations are passed. Existing regulations and zoning are amended and get repealed. Building codes get stronger.

Despite the engineers’ best efforts, buildings don’t last forever. They aren’t supposed to burn down, but it happens. They’re not supposed to spontaneously collapse, but it (rarely) happens. Hurricanes can damage a building, making it uneconomical to repair. Land that is buildable now may be negatively impacted by tides, wind erosion and zoning changes in the future.

Nothing in this agreement should “grandfather” this property forever. Any future changes to the property should be subject to the laws and regulations then in effect. (Just like the rest of us.)

It seems to me the most important question never gets asked or answered: Did the developers ever get approval for any part of their 85-foot tall, 11-building project before the height restriction ordinance went into effect? If so, they might have a case that they should be grandfathered in to the old height limit. If not, then they have no right to expect a variance on the new ordinance. We would’ve heard if there were already permits approved, so I have to assume the developers are just looking for a quick buck. Also, thank you for the calculation of the current land value. The only way the developers’ case holds up is if their land is worth $45 million, and it appears to be worth much more than that. We should vote NO on any settlement and be prepared to litigate this case.

You’re correct. Every lot in the county (vacant or not) holds someone’s dreams and “plans” for the future. It’s always been true that you have to develop your property in accordance with the current rules, not the rules you choose from the past.

No Riverstone never got approval for 85 foot towers.

Thank you, Corky, for such a thorough, thoughtful and comprehensive piece about the Riverstone property “mess”. It clarifies so much of the misinformation being discussed and will hopefully bring both sides together for a civil discussion and reasonable compromises.

Thank you for a very well written summary. Bottom line at the end of the day, if your land calculations are correct, The Emperor has no clothes. No damages~~no case. Sord rattling by lawyers.

The best defense for developers many times is an offense and the mentality of “we’ll see you in Court”. If these developer attorneys were faced with a mirror image amount in Little People damages and costs (i.e. they loose they pay the citizen/county legal costs as in European Courts) maybe they would not be so quick to posture. The entire “legal” system appears broken if not to address the protection of the innocent~~as always the taxpayers those of us paying The Commissioners, the cost of the entire system.

Zoning and height restrictions, yes they are development controls. Controls to preserve quality of life for the other 99% of us that cannot afford a $1 million plus for a lot to build a multi million dollar house let alone a 85 foot condo tower. This is a clear case of elected officials elected to protect the common good not their egos nor wallets. Let’s see if they have the ethics and backbones to stand firm on their oaths to protect the common good.

Say no to greed. Contrary to the movies, greed is not good.

You have answered most of the important questions. Thanks for that.
My comment is this: What was Riverstone thinking when they originally purchased the 50 acres? Did they think they could just build whatever they wanted, environment be damned? Somebody in that organization had inside knowledge that they could get over on the Nassau Commissioners or they wouldn’t have made it this far. You can’t convince me there is not corruption going on here.

Thanks for this informative piece. I do hope that the Commissioners will stand strong against Riverstone’s proposal. The single home proposal allows development, just not development that violates pre-existing building constraints. . Just like residents living in an HOA managed community they must abide by the community standards and rules.

Thorough and precise job of a bad plan for the south end of Amelia Island. Back room deals have been a historic part of the island development and I hope island residents stand together to halt this one in its tracks. The Nassau BOC works for the citizens not the other way around. I hope they stand up to this developer and Rogers Towers. The thought of lighted bill boards as part of the trade for a park concession mentioned in this report just floored me. Shame on that law firm and Mr. Liggett for this mess.

A speculator’s speculation, based on 2021 changes to the Bert Harris Act. https://www.flsenate.gov/Com…/billsummaries/2021/html/2478

I wrote a quick note to Mr. Bell and Mr. Martin, they both replied quickly. How they will vote, remains to be seen.

Good job of explaining it I hope Amelia Island sticks to the guns an don’t allow it. Because if one does it others will

Thank you for the summary. I urge everyone one to read Section 9 of the settlement, it includes adding up to 150 multifamily additional units, and accessory buildings. This includes but are not limited to, meeting rooms, parking garage, restaurants, pools etc. All of this adds up to the property obtaining a “Resort Certificate”. Not only has Nassau County voted against building above 45 ft, but we have also voted against building another resort or hotel on this property. That was most recently turned down when the racetrack was proposed at the airport, this property was included in the development plans. Classifying the property as a resort, will restrict public beach access on the south end of the island, it does not increase it. Public beach access is already at a critical point, we do not need to restrict or limit any more access. The “Linear Park” looks nice on paper, but that is all it is, an artistic drawing. My understanding is nothing has been permitted or approved, and the items in the drawing are all “examples” of what could go there, not what will.

Anybody who considered beachfront property in the past probably recalls what happened to AI bubble pricing in 2008. My point being that all value proposals are speculative and timing absent zoning barriers is critical. Buying something speculatively is always risky but threatening the zoning commission absent any wrong doing on their part is simply stupid. Their are homebuyers available on both sides of this disagreement. The county commission should not cave to threats, that will only make all future issues a precedented nightmare.

I am a Nassau County resident and plan to attend, and will request to be able to speak at, the Meeting to be held this evening that will deal with possible changes in construction possibilities in Nassau County.

In preparation for that meeting, I request that you give thoughtful and unified attention to the following:

I look forward to the meeting, and particularly to your clear manifestation of interest in and protection of a party in interest that cannot express its own needs—namely the South Island land itself. From the publicly available information, it looks like Riverstone is not planning to treat it very well, and it has no one but you to protect it.