The idea generated blowback on Facebook before the presentation occurred. 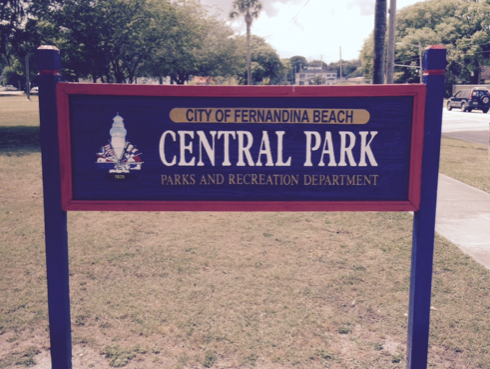 The direction to Fernandina Beach’s interim head of Parks and Recreation was to “be bold,” take some risks and not worry about the fallout as it came to addressing the parks’ long-term sustainability.

“Right here is where the (six) pickleball courts and the (four) tennis courts are,” city Interim Parks and Recreation Director Scott Mikelson said at Tuesday night’s Parks and Recreation Advisory Committee meeting, pointing to the area on a projected map of Central Park.

“The plan would be to put a whole new playground area … right here, in this area, instead of having random pieces where people have very recently said, ‘Why don’t you have this large playground equipment there?’ Right now we can’t afford it.”

City workers removed the old playground equipment because of maintenance and upkeep issues.

Next to the new playground would be a picnic area, and a large pond with an adjacent fountain would take up much of the area presently occupied by playing fields — four baseball fields and a football field. A multipurpose field would be in the general area of the park’s present football field. Mikelson suggested an event platform that could go near the field for community events.

“Basically, a park that is not — don’t hate me for saying this — that is not locked down most of the time,” Mikelson said. “Anybody can use it.”

The idea generated blowback on Facebook before the presentation occurred.

“I tried to say this, or I did say this on Facebook, is that we are going to hear this presentation at the same time you are,” Committee Chairwoman Cheryl Grantsaid. “You heard things from people who said things, and we don’t know what you’re talking about yet. So, all of us are going to hear the entire idea.”

Tennis and pickleball would move to the city golf course, where eight new pickleball courts and six new tennis courts would be installed, with space for growth. The hope is more people could take advantage of the courts and of the golf course’s food and beverage service as well, which hasn’t brought in revenue to levels city officials would like.

The football and lacrosse field at Central Park would relocate across Hickory Street from Fernandina Beach High School’s baseball and softball fields. Mikelson said he believes they can fit two fields and a parking area into that space. The baseball fields would move to Ybor Alvarez Sports Complex, which would essentially be redone to accommodate the new fields, parking and support facilities.

Mikelson’s goal, he said, was to start the discussion. With a crowded City Commission chamber and posts on social media, that goal was met before he finished speaking, though maybe not in the way expected, and in more ways than one.

“Over that course of time, we’ll look at how it would be funded,” City Manager Dale Martin said. “At this point in time, the city has received an anonymous donation of $500,000 to support moving forward with the reconfiguration of Central Park.”

There are no plans to use any general fund property tax dollars involved — only donations, impact fees and grants.

Over the next two to three months, city staff will reach out to the various community groups that provide a lot of the use to city parks and craft the plan into something that city residents can support and the city government can afford.

“Enough doggone — and that’s a nice word — parks,” said Marian Phillips, a longtime city resident, former City Commission candidate and current Marina Advisory Board member. “Too much of our tax dollars have been spent on parks. These children don’t want parks. They’re not going there to have kumbaya and hang out with their friends in a park. I used to be young and I know what they want to do, OK?”

City resident Rob Hicks said behavior by city officials and the boards in recent months hasn’t generated a lot of confidence in the public.

“Friends, the takeaway here is I’m not sure we can fully trust these people, and I think that’s the issue here,” Hicks said. “You talk about this mysterious ($500,000) donor, you’re doing some things that build trust — some of the presentation here, we heard the City Manager speak about some things, ‘Well, if we have this new stuff, then we’ll have space for a 5K. …’ I don’t know why we can’t do that from Central Park right now.”

He added that it seemed like the city — prohibitively expensive to live in for most people, let alone most families — isn’t caring for the needs of the city’s youth like it should. Other speakers, and residents on social media, aired worries about youth having to navigate more traffic and put themselves at risk as pedestrians to reach the new fields.

Following Hicks’ remarks, Grant reminded attendees that the Advisory Committee is just that, and doesn’t have any power beyond members’ reasoned advice. The next City Commission meeting is set for May 17.

From the article – and I assume from remarks made during the meeting – “Tennis and pickleball would move to the city golf course, where eight new pickleball courts and six new tennis courts would be installed, with space for growth. The hope is more people could take advantage of the courts and of the golf course’s food and beverage service as well, which hasn’t brought in revenue to levels city officials would like.” So – once again, we are trying to prop up a losing operation by throwing more dollars in that general direction. What is the expense involved in moving tennis and pickleball? Reworking the space at Central Park after the move? How much was spent adding Top Tracer? Where is there any proof that this will mitigate the continued losses at the city golf course?

Sounds like that someone is motivated to make our park into a water reservoir storage/ overflow area and call it a pound. Meanwhile deleting a perfect recreational/historical area for our youths growth and welfare.