Posted on May 9, 2022May 9, 2022 by Suanne Thamm
Fresh Take Florida
a news service of the University of Florida College of Journalism and Communications.
May 9, 2022

‘They kind of seemed deceptive towards me, telling me that everything’s fine. Then they slapped me with a felony.’

It was his freshman year.

The University of Florida student had just returned from a night out drinking with friends in 2018 when he was caught by university police with a fake ID — one he said he wasn’t even using that night. 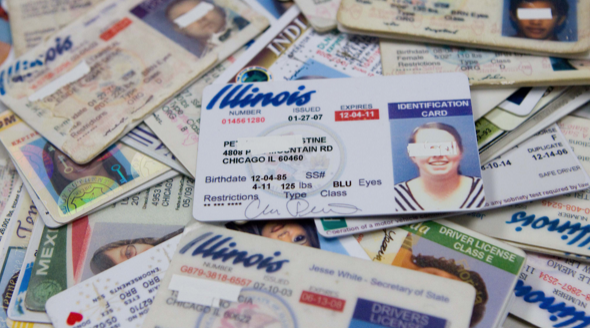 His friends had bought him alcohol, but he drank too much and fell asleep in the common area of Rawlings Hall, where his friend lived. A university police officer searched his wallet, he said, and discovered his fake ID. He remembered being told he might get an email from the university and that otherwise he was “good to go.”

Two months later, his parents received a letter in the mail from the Alachua County Court Clerk’s Office. The fake ID he had obtained for less than $100 would ultimately cost him about $2,500 — mostly in attorney’s fees.

“I wasn’t really doing anything other than sleeping,” he said. “They kind of seemed deceptive towards me, telling me that everything’s fine. Then they slapped me with a felony.”

This is just one student’s story of getting busted with a fake ID, a college rite of passage that quickly evolved into thousands of dollars in legal costs.

University of Florida police have forwarded nearly four dozen felony complaints to state prosecutors against students caught with fake IDs over the past four years according to an analysis of court records conducted by reporting students at UF’s College of Journalism and Communications. Outcomes varied, but out of 45 cases all charges were either dropped or reduced to misdemeanors.

Most students entered deferred prosecution deals, three students had their charges dismissed, and three cases have yet to be adjudicated — two with unexecuted summons and one that remains open. Only two cases resulted in criminal convictions — both misdemeanors — one of which had adjudication withheld. Two cases have since been expunged.

Of 43 students contacted for this story, four agreed to interviews under the condition of anonymity. An additional four students have been handed felony complaints for fraudulent IDs in the past two weeks.

Despite being issued a felony complaint by university police, the aforementioned student was later formally charged by prosecutors with a lesser misdemeanor and eventually offered a deferred prosecution agreement requiring him to pay $270 in legal fees as well as make a $100 donation to a local charity, according to court records.

Of the 45 defendants, 35 have entered deferred prosecution agreements.

Deferred prosecution agreements are a contract between a defendant and the State Attorney’s Office, said Adam Stout, a criminal defense attorney in Gainesville. Prosecutors agree to dismiss all charges as long as the defendant completes a list of conditions within a certain time period.

In fraudulent ID cases, this usually means paying $100 in prosecution fees and either paying $100 to a local charity or completing 10 hours of community service. After four months of good behavior, charges are dismissed. Of the cases analyzed, 28 students agreed to this specific arrangement. Seven others received less lenient deals, paying more or waiting longer to have their charges dropped.

Stout said deferred prosecutions provide the two best benefits for students in these cases: rehabilitation and a punishment that will not impact them for the remainder of their lives.

He said the purpose is to give first-time offenders an opportunity to right their wrongs.

“Once you get caught in the criminal justice system, it’s very, very hard to get out,” Stout said.

Kristy Sasser, captain of the university police patrol division, said criminal charges in these cases usually meet the statutory requirements for a felony. A misdemeanor complaint would only apply if the date of birth is altered on a legitimate government-issued driver’s license. Felony charges result when the ID itself is deemed fraudulent, which is often the case.

“We are the administrators of the law,” Sasser said. “We don’t create the law.”

Websites like FakeYourDrank and IDGOD, which some students identified using to obtain their fake drivers licenses, offer phony licenses with altered dates of birth. But they also add false information for document numbers, addresses and issue and expiration dates, making ownership a felony.

The IDGOD website says it is located “outside the United States” and explicitly warns its customers, “Legality is a significant issue when purchasing our fake IDs.”

Sasser said prosecutors decide which charges to pursue, if any.

Another student interviewed had not been on campus for two weeks before he experienced a run-in with university police. Less than one month into his first summer semester, he took an Uber back to his dorm from a nearby bar. In the short walk from the car to his dorm room, he dropped his keys and wallet.

Police at the complex on an unrelated matter found the student’s black leather wallet on the ground with a fake ID inside.

After his roommates responded to a slew of missed calls from police to his phone, officers entered the freshman’s dorm room, the fake ID clipped to one of their vests. Two weeks later, the summons was delivered to his parents’ home, setting a court date for their son. By this point, prosecutors had reduced the police felony recommendation to a misdemeanor.

He called a lawyer who said he could settle the situation completely out of court and promised a deferred prosecution — for $1,500. Instead of paying, he called the State Attorney’s Office himself.

“I asked them straight up if I qualified for deferred prosecution, and they told me yes,” he said. “I basically did what the lawyer was going to do for $1,500 for free.”

Four months of good behavior and $200 in fees and charitable contributions later, the charge was wiped from his record — no lawyer or court date required.

To stay in good standing with the university, he visited the Dean of Students Office to review the police report. He attended a seminar related to drugs, alcohol and the law, a punishment he thought was “pretty lax.”

Nearly one-third of students were able to secure lenient deals without an attorney. Stout, the defense lawyer, said hiring a private attorney raises students’ chances of securing an agreeable outcome.

Another option for legal advice and representation for those enrolled at UF is Student Legal Services. The student-government funded office is staffed by four experienced, full-time attorneys and has provided free legal services to students charged with possession of a fraudulent ID in the past, spokesperson Hessy Fernandez said.

The statute for fake IDs is written not to be malicious toward students but to effectively punish those who manufacture and sell fake IDs, as well as those committing identity theft, said Darry Lloyd, the spokesperson for the State Attorney’s Office in Gainesville.

Lloyd said a deferred prosecution agreement is the best outcome.

“It’s meant to be a slap on the wrist,” Lloyd said. “They did the crime and that’s our way of telling them not to do it again without convicting them of a felony.”

Another student interviewed for this project — a UF freshman at the height of the COVID-19 pandemic in 2020 — was booked into the county jail for possessing a fake ID he’d received in high school.

The student said he knows plenty of other underage students in Gainesville with fake IDs, many of whom have had similar run-ins with cops which didn’t result in a criminal complaint. The way he sees it, he was just unlucky.

Of the 45 students identified for this story, 34 are males.

Charged by prosecutors with a misdemeanor, he entered a deferred prosecution agreement and paid $200 in fees.

Because of this incident, along with other common challenges associated with the pandemic, he moved back home with his parents and transferred schools.

“I understand the reason for the law,” he said. “It’s not made specifically for the college students who are getting in trouble. It’s just a side effect that we have to deal with.”