At the Fernandina Beach City Commission (FBCC) January 26, 2022 Goal-Setting Session, Oasis Marinas management pledged to conduct a rate review and propose appropriate adjustments to the slip rates at the Fernandina Harbor Marina. The primary intent of the rate review was to lessen the cost burden of dredging on the General Fund and provide additional funding from Marina users.

Oasis Marinas originally presented its rate analysis at the March 2022 Marina Advisory Board (MAB). The MAB endorsed the proposed rate changes for transients, but declined to make a recommendation for long term slip holders.  Rates for transient boaters will increase by 20-41 percent, depending on time of year and length of stay. 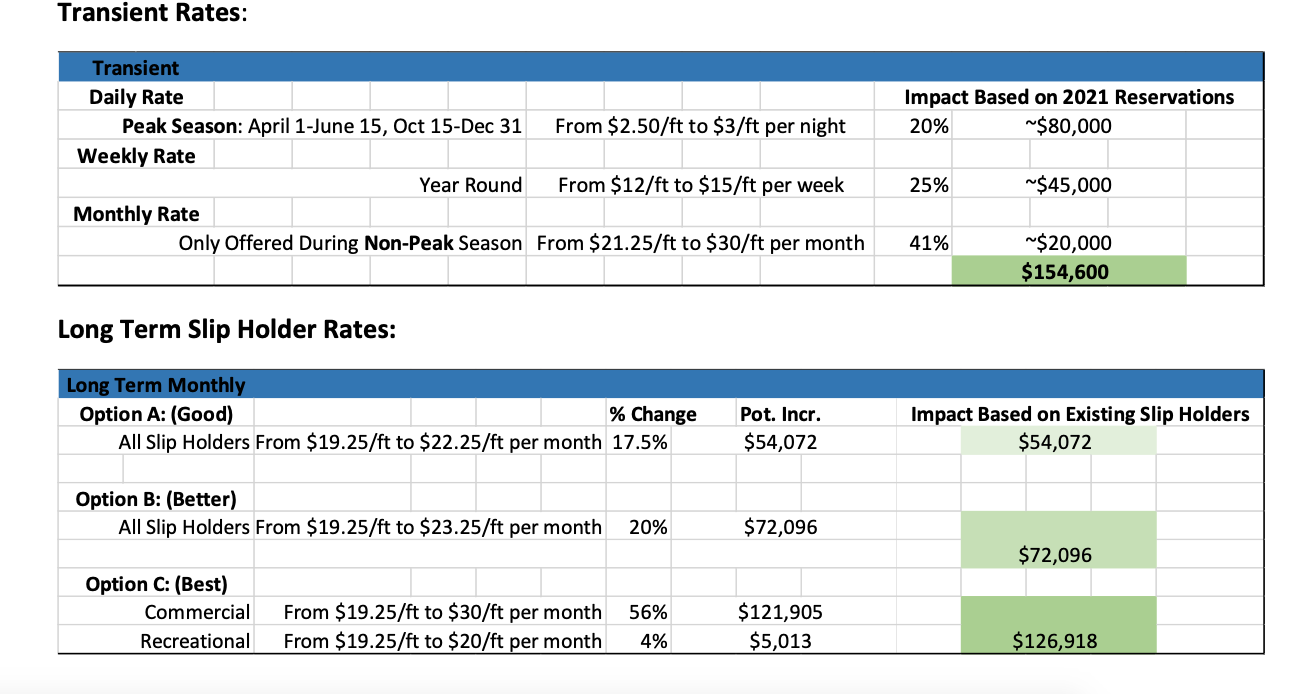 The FBCC considered the recommendations at their May 3, 2022 Regular Meeting.

Ross noted that without raising rates the marina will need to continue relying on subsidies from taxpayers (general fund revenues) to cover needs for regular dredging and to improve facilities such as the boaters’ restroom/laundry facilities.

Oasis Marina/Fernandina Harbor Marina manager Taylor Fitzsimmons explained the rationale for the difference in rates between recreational and commercial long-term slip rentals.  He noted that 42 of the slips are occupied by recreational boaters, and 30 are commercial operators.  There is a waiting list of more than 80 for long term slips.  “63 percent of the docking space is occupied by commercial operators, who are profiting off the marina,” he said.  “They have more guests, generate greater use of facilities and create more wear and tear on facilities.“

Mayor Mike Lednovich agreed with the points made by Commissioner Chip Ross:  the marina needs money, which should come from the users, not the taxpayers.  But he balked at the 56 percent increase proposed for commercial operators.  He agreed with the MAB that the marina has not yet logged a full year of operation under Oasis Marinas.  He said that he would not wait a year for rate increases, but said he would feel more comfortable raising rates now 25 percent while awaiting the results of the marine hydrology study on siltation issues.  He expressed a willingness to consider additional rate increases following the hydrology study.

Ross countered by saying that costs are going up for commercial operators, but also for the City.  “Who’s going to bear that cost?” Ross asked.  “The taxpayer?  Or you’re not going to fund the marina?  Or where’s it going to come from?  Commercial operators are making good money, and we are subsidizing them.  Yes [56 percent] is a big increase, but we should have increased the rate before.  Our business model is we are charging less than it is costing us.  Anyone who thinks the cost of dredging is going down is wrong.”

An exasperated Commissioner David Sturges said, “All I hear at these meetings is raise the rates, raise the rates; tax the citizens and raise the rates.  I’m tired of hearing this.  I agree that there are some things that the citizens need to bear [the cost for], but I think 56 percent is an abnormal increase.”  He suggested eliminating wave action insurance ($300K+ per year) and awaiting suggestions for alternatives to dredging that could come from the hydrology study.

While acknowledging the need for added revenue, the majority of Commissioners balked at increasing rates for long term commercial slip holders by more than 50 percent.  Ross’s motion failed on a 3-2 vote, with only Ross and Kreger in support.

Commissioner Bradley Bean offered a new motion, seconded by Sturges:  approve the resolution with an across the board rate increase for all long term slip holders of $25 per linear foot per month, roughly an increase of 25 percent.

The resulting revenue increase for the marina will be approximately $104K as  opposed to the $126K that would have been generated by Option C.

The compromise was approved on a 4-1 vote, with Ross dissenting.

The statement above, “The MAB endorsed the proposed rate changes for transients, but declined to make a recommendation for long term slip holders” is not correct. The MAD unanimously recommended that the transient rate increase be approved BUT the long term slip holder rate increase be postponed until July when a full years operations will give a good idea about the financial condition of the marina. Most of the discussion centered around option “B” for the long term increase. A motion was made to approve option “C” and it failed due to a lack of a second. Long term slip holders are, by in large, residents of Fernandina Beach or Nassau County and pay local property taxes.

Non-city residents don’t pay any property taxes that go to the City. Slip holders, whether commercial or recreational, that are city residents should get a discounted rate as long as general fund tax dollars are being used to subsidize the marina’s operation including dredging. Or put another way, charge non-residents a premium. I am concerned the MAB’s position follows the tradition of the previous MAB that was sunset as well the Golf Course Advisory Board that they are willing to make transients/visitors pay a market price but they want the locals to continue to be subsidized. Again, as long as general fund dollars are being used I am okay with that for city residents, not all county residents.