Impact Fees “A Paper Napkin Calculation?” – A look back

Editor’s Note: Adam Kaufman joined our volunteer staff as our legal analyst. With an impact fee lawsuit coming before the court, we recruited Adam. His coverage of the case received accolades far and wide. Adams’s headlines were clever, and his writing allowed those of us without law degrees to understand the issues before the court. Thank you, Adam, for spending your retirement years doing so many good things for our community and keeping us informed. 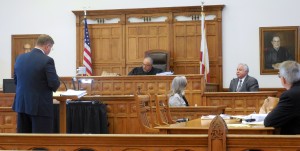 Whether the $1500 “impact fee “imposed upon new water customers established by the City of Fernandina Beach to pay for “futures” as part of its purchase of its Water Utility from Florida Public Utilities in 2002 was illegal and an illegitimate finance mechanism constructed by the City’s consultant “on the back of a napkin” in order to “do the deal” or an appropriate exercise of the City’s power pursuant to the Florida constitution is the question that remains before Judge Brian Davis at the conclusion of the second and final day of hearings in the City’s “bond validation” case.

In the final argument to the Court, attorney Thomas E. Bishop representing Joanne Conlon the intervener in the proceeding, called Fernandina’s “impact fee” an illegal tax and contended that the actions of the City in imposing this fee violated the Florida constitution, statutes and legal precedent.

Acknowledging that “impact fees” are permissible, he maintained that these fees must be established in a “methodical process” upon a determination of need resulting from new growth. Bishop emphasized that Florida’s supreme court has approved of a local government’s use of impact fees to raise “expansion capital” by setting fees “which do not exceed a pro rata share of reasonably anticipated costs of expansion” when expansion is “reasonably required” and “the money collected is limited to meeting the costs of expansion.”

That is not what occurred here Bishop argued.

Gerald Hartman, the City’s consultant, Bishop suggested, knew full well that he could not move the Fernandina City Commission to borrow and pay more than $18,000,000 to $19,000,000 in cash to FPU and he knew that FPU would not sell for a price not in the mid $20,000,000 range. Faced with pressure to complete the purchase and sale, what Hartman cobbled together “to fill the gap” and fund the purchase of the existing system as a whole was the fallacious “futures” prescription establishing an initial payment by new water customers for service from existing “excess capacity” charged as an “impact fee.”

Bishop showed the Court Hartman’s handwritten notes and calculations with lines drawn around numbers and arrows pointing to other numbers, some crossed out, generated by Hartman during the purchase negotiations which allegedly created, modified and adjusted the “impact fee” calculation. The amount of the fee, number of “new customers” and number of years in the calculation to estimate the funding sufficient to complete the purchase varied: totaling first $5,000,000 and finally, the $7,500,000 “futures payment” that was factored into the $26,450,000 sale price.

What is completely absent in the record, Bishop maintained, is any demonstration that Hartman, the City, or the City Commission did the “dual rational nexus” analysis required for imposition of “impact fees” and further, there is no evidence that the City Manager or the City Commission ever saw Hartman’s specific “futures impact fee” calculations until 2013. Bishop stressed that it is clear that there was no reasonably required system expansion related to growth or benefit to new customers to be paid for, nor would the fees generate the $7,500,000 over 7 years needed to meet FPU purchase price and the “futures payment.” At the time of the acquisition the City, in fact, recognized there would be a $5,000,000 short fall, but, it had, in effect, delayed borrowing to complete the purchase.

The payment of “impact fees” for new customers for existing or excess capacity based upon the “futures” equation, suggested Bishop, was just a device and canard to make the purchase “politically palatable.”

Bishop underscored that there is no dispute that current customer water rate payments can pay for the debt obligation at issue.

Bishop called attention to the timing of the “bond validation” proceeding and the City’s motivation, calling it “an end run around the class action case” and a legal tactic to “stop” a lawsuit.

This was Hartman’s deal and what is apparent Bishop contended is that “the deal drove the impact fee” not growth or the costs of expansion.

Susan H. Churuti gave the closing argument for the City.

Churuti told the Court that it should uphold the City’s 2002-2003 action unless it could be found to be “patently erroneous.” She maintained that the Court should not apply in its review of the financing agreement and the impact fees supporting the bond the provisions of the 2006 Florida Impact Fee Act. The Act specifies that burden is on local government to prove that the fee meets the requirements of legal precedent and prohibits the Court from presuming that government action was correct and deferring to local government decisions.

Churuti argued that under the Florida Constitution power resides in the electorate and local government. Local government actions, she contended, are therefore “self-regulating.” It is the electorate that monitors the appropriateness of the decisions made by its elected officials.

The purchase of the Water Utility and the imposition of “impact fees” she emphasized was a legislative determination and the City Manager and Commission reasonably relied upon its consultant and recognized expert, Hartman.

Churuti argued that principles of “home rule” should apply here. The funding of the purchase of the Water Utility and the imposition of “impact fees” were the choice of the community. She noted that Fernandina Beach has a history on imposing impact fees, for example, for Parks and Recreation. Further, both by the terms of the ordinance and by periodic election the public had and will continue to have the opportunity to influence City Commission action.

Churuti contended that there is no evidence in the record that the City of Fernandina Beach did not have authority to issue the bond, that the purpose of the bond was illegal or that the authorization of the bond does not comply with the requirements of law which are the limits of judicial inquiry in “bond validation” proceedings.

Adam, welcome aboard! City finances need to be exposed to the light of day