Pat’s Wildways: Happening at the inlet – A look back 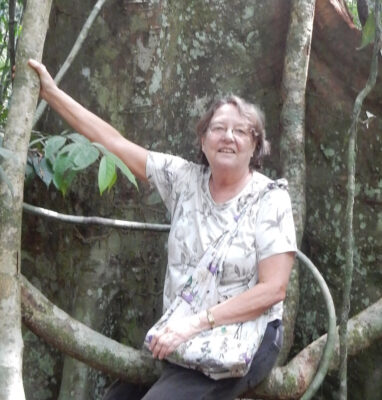 Editor’s Note: We asked Pat Foster-Turley to select a column that was one of her favorites. She chose “Happenings at the Inlet.” First published on October 14, 2021, this column shows the diversity of people and sights on Amelia Island and also a fond memory of her last months with Jean Taylor.

We were delighted when in June 2021, Pat accepted our invitation to join the Fernandina Observer. Pat is well known in our community, having served as a columnist for the NewsLeader. Since joining the Observer, she has taken our readers on her traveling adventures both near and far. At times she stayed local and gave us a glimpse of nature’s little creatures often found in our backyards. Pat helps us realize even more that we live in a very special place. Thank you, Pat, for your contributions to the Fernandina Observer.

Living in Fernandina Beach there are always unexpected happenings that make you appreciate the place we call home. One morning last week, for instance, my friend Jean Taylor and I went for a drive through Fort Clinch State Park, admiring the frothy purple flowers of muhly grass, the white daisy-like flowers of Spanish needle with their attending butterflies and the tall yellow spikes of goldenrod as we drove along the park roads. Eventually, we parked ourselves on a bench at the East Fisherman’s Inlet near the fort to view the landscape and enjoy the cool sea breezes.

On the way down the boardwalk to the bench I stopped to inspect the sign declaring this a “horseshoe crab nesting beach” with instructions on how to report any horseshoe crab with a numbered marking on its shell. Horseshoe crabs come in during full and new moons to mate and lay eggs on this beach during spring (March and April) and fall (September and October). If you read this and act quickly to visit this area you just might see them now. And, although it is too late to sign up this year, you can become a Citizen Scientist and help in upcoming horseshoe crab survey and tagging efforts. For more information check out the website: https://myfwc.com/research/saltwater/crustaceans/horseshoe-crabs/citizen-watch/.

From our vantage point on our bench I noticed a horseshoe crab in the sand and watched a boy overseeing two younger girls who wanted to touch it, but he shooed them away. No sense for that. I walked over to them and carefully picked up the crab to show them. Turning it over I saw that it wasn’t a live crab, but just an empty shell discarded when the crab molted and grew into a bigger shell. It was a great chance for me to tell the kids all about horseshoe crabs and their importance to us all.

Horseshoe crab blood contains a component widely used for biochemical testing of many vaccines and medical devices we humans rely on. And their eggs provide an important food source for migratory seabirds that are shrinking in their populations as the horseshoe crab populations decline. These animals that have been around since prehistoric times are threatened now by overfishing (they are used as bait in whelk and eel traps) and by loss of the habitats like this Fort Clinch beach that they need for reproduction. As humans build more sea walls and modify more coastlines for human uses the breeding areas suitable for horseshoe crabs are disappearing.

I left the kids to inspect the empty shell, and returned to join Jean on our bench overlooking the beach. Soon more people started showing up in groups composed of mothers with children, who apparently knew each other, and greeted new arrivals when they appeared. At first, we thought these were home-schooling families on a beach outing together. But then we noticed more groups of people up on top of the fort in the distance.

Out on the water it was getting interesting too. An orange coast guard vessel passed by first and then we noticed the armada of other boats far off in the distance. A nuclear-powered submarine was coming back to Kings Bay. Of course! And Jean and I had a ringside seat for the parade! Perfect!

The mothers and children lined up along the beach to greet the ships. Up on the parapets of the fort, similar scenes were occurring. The massive submarine had only its conning tower and some of its back exposed, but it was impressive enough. A group of other boats accompanied it including a large vessel that blocks the submarine from any land based attack. But these people were not attacking. “Wave at Daddy’s boat” was the refrain as everyone cheered and waved. It didn’t take long for the ships to pass by on their way to Kings Bay and home again. One mother told me that her husband had been gone only a month this time, to parts unknown, but everyone was eager to reunite their families once again.

It was a joyous time for everyone, and for Jean and me it was another occasion to reward ourselves for our great choice of Amelia Island as our home. You just never know what you will happen upon next!

Pat Foster-Turley is a zoologist on Amelia Island. She welcomes your nature questions and observations. [email protected]

Dear Pat, I have watched many Subs come and go from that place. It never ceases to amaze me that I am watching one of the most destructive forces on earth glide beautifully in the sea. My son, as a submariner, has made that trip many times, and I have been full of both joy and sadness. It is an extraordinary world.

As a child, I, too was frightened by horseshoe crabs. It was when I visited one of the exhibits at the shrimp festival that I learned how valuable they were, and how old their heritage is. Thanks for reminding us of their role in our biological existence.