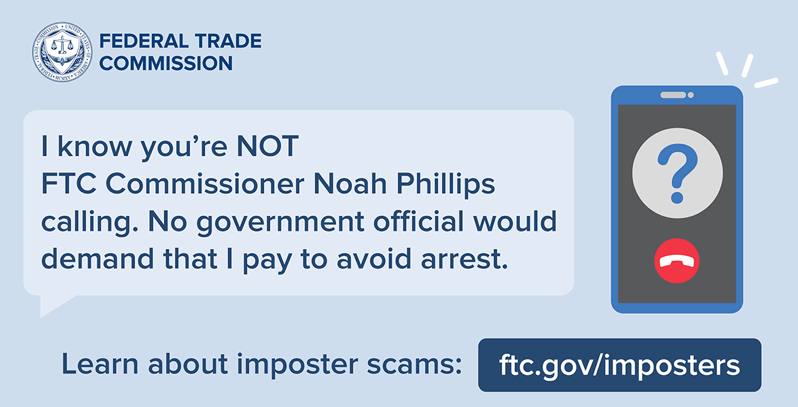 You’re minding your business and the phone rings. If you don’t screen and ignore it, you answer — and the caller says he’s Commissioner Noah Phillips from the FTC. (He’s not.) He gives you a badge number (it’s fake), says there’s a warrant for your arrest (there’s not), and demands that you pay up (nope).

Scammers — like the ones pretending to be Commissioner Phillips — then might demand access to your bank account, or tell you to pay them by loading money on gift cards, buying cryptocurrency, or using a money transfer service like MoneyGram or Western Union. They could say it’s a way to avoid jail, pay a fine, or settle up an unpaid Amazon balance. (It’s that fake Amazon balance story the scammer pretending to be Commissioner Phillips is using, at least as of yesterday.)

Here are three things to know about this scam:

One more heads-up: Scammers are good at rolling with the punches. So let’s get ahead of them:  FTC Chair Lina Khan, Commissioner Rebecca Kelly Slaughter, and Commissioner Christine Wilson ALSO will not call you to demand money. And they’ll never threaten you with arrest.

If you spot this scam, tell the FTC: ReportFraud.ftc.gov.