from The County Insider
Office of the Nassau County Manager
April 19, 2022 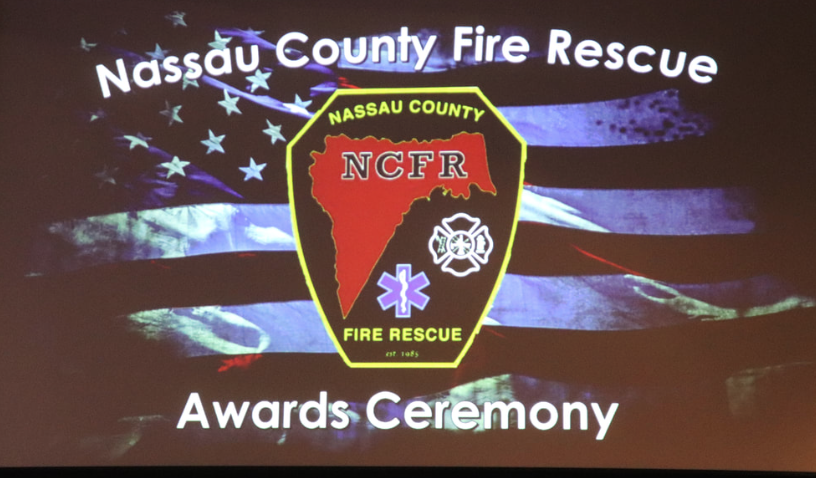 4/19/22 @ 9:45 a.m. – On Thursday, April 14, 2022, Nassau County Fire Rescue hosted an awards ceremony to recognize achievements of personnel within the department. The event was held at the Journey Church with Tax Collector, John Drew, serving as the Master of Ceremonies. Since there was no event in 2020, awards were given for both 2020 and 202 for some categories.

Below are names of those who were recognized.

Promotion to Engineer
After serving for a minimum of one year as an entry level firefighter, members are eligible to sit for an examination to be promoted to Engineer. As Engineer, these individuals operate the apparatus and are responsible for daily checks to the vehicles and equipment.
Mike Powell, Luke Davis, Kyle Adams, Joey Driggers, Raleigh Zike, Alton Robey, Josh Fitchett, Jeremy Staub, Daulton Cowart, Michelle Hoover, David Kirk, ,Steven Henderson, Stephen Lawson, and Brandon Taylor

Promotion to Lieutenant
These individuals will be responsible for all operations of their crew while on shift: Lt. Brett Loius, Lt. Weston Gill, Lt. Ryan Ward, and Lt. Jeremy McAlee

COVID Operations:
Administrative Commendation Award were given to Battalion Chiefs Mike Eddins and Chris Gamble for the decisions they made to keep the department functioning at a high level during the COVID-19 pandemic.

Station 70 Construction:
Administrative Commendation Awards were given to Lt. Jamie Graf, Lt. Sean Watts and Lt. Adam Bolger for their leadership skills during the Station 70 construction while maintaining their crews and normal duties.

Unit Commendations
This is awarded to any group of two or more members for exemplary performances of duties in overcoming obstacles under unusual or adverse conditions.

Station 50/A Shift
On September 24, 2021, this crew responded to an early morning call of a Deputy down. Upon arriving, they were able to regain a pulse and transported the Deputy to the UF-Health Trauma Center where he would later die fromo his injuries. The actions of the crew gave the family of Deputy Moyers a chance to say goodbye. It also allowed Deputy Moyers a chance to live through others by donating some of his organs to those in need. Members of this crew are:
Lt. Adam Bolger, Eng. Cody Canaday, Eng. Chris Arnold, and Firefighter Matthew Roth

K9 Chaoas
Also in the early morning of September 24, 2021, crews from Rescue 90 and Engine 50 received reports that another officer had been shot. They arrived to find Jacksonville Sheriff’s Office K-9 Deputy had sustained multiple gunshot wounds. The crew administered life-saving treatment and transported Chaos to an emergency vet in Jacksonville. It is believed that the crew from Station 50 that morning was the first crew in the State to transport a K-9 Officer via rescue unit.
Lt. Adam Bolger, Eng. John Watson, Eng. Robbie Hern, and Firefighter Matthew Roth

Firefighter of the Year

2020 Firefighter of the Year:
Lt. Ryan Ward. Lt. Ryan Ward serves as the leader of an internal orientation program consisting of 6 weeks of training. He oversees scheduling of training, coordinating instructors, and often teaches classes himself.

2021 Firefighter of the Year
Engineer Josh Fitchett. Eng. Fitchett serves on the Awards Committee and Honor Guard and has performed his duties with great pride.

Fire Officer of the Year

2020 Fire Officer of the Year
Lt. David Lee. Lt. Lee participates in the County fleet replacement program and determines which specifications are required for each engine, rescue, ladder truck, tanker, brush truck, etc. He efforts have ensured that their vehicles are specified and built in a way that best meets the needs of the department.

2021 Fire Officer of the Year
Lt. Brian Sloan. Lt. Sloan served as the Infection Control Officer and was actively involved in caring for members of NCFR related to COVID-19. He answered his phone many times, day and night, to help the personnel get the information they needed.

Paramedic of the Year

This is awarded to any paramedic of the department for exemplary service and dedication in the performance of their medical duties. Nassau County Fire Chief, Brady Rigdon, announced that the award is being renamed to the Dr. Farid Ullah Parademic of the Year Award, in honor of the original Medical Director for NCFR, Dr. Farid Ullah. He served for 40 years, giving his time and talents to enhance the skills of NCFR professionals. He passed away on September 24, 2021 following a lengthy illness but will always be remembered for his service and dedication to the County.

2020 Dr. Ullah Paramedic of the Year Award
This was awarded to Eng. Matt Waggoner for his time spent upgrading the department’s reporting software and serving as a primary instructor for Advanced Cardiac Life Support and Basic Life Support.

2021 Dr. Ullah Paramedic of the Year Award
This was awarded to Eng. Joey Driggers for his efforts serving on the Quality Assurance Committee to improve system performance and improve emergency medical services in the County.

Life Saving Medal
This was awarded to Firefighter/Paramedic, Joshua Berglin. On September 10, 2021, while returning from a transport to Baptist Medical Center’s Northside Campus, Rescue 40 came upon a motor vehicle that had crashed into a pond. The driver was still in the cab of the vehicle with his head submersed under water. With little regard to his own safety, FF/Paramedic Berglin, entered the pond, opened the door, pulled the driver out and brought him to shore where he was treated and transported.

Distinguished Service Medal
This was awarded to Battalion Chief, James Casteel. In December 2021, Fire Rescue’s staffing program was attacked by ransomware. Battalion Chief Casteel immediately went to work try to determine a work-around and spent many hours working with the vendor so there was minimal impact to the organization.

Please join us in congratulating each of these individuals for their achievements. We appreciate each of them and all they do to keep our community safe.

These are some of our unsung heroes!! They should be admired for rushing to the scene of an accident in an attempt to save lives. These folks see death and injuries too often and somehow continue to dedicate their time and talents for the good of their fellow man.