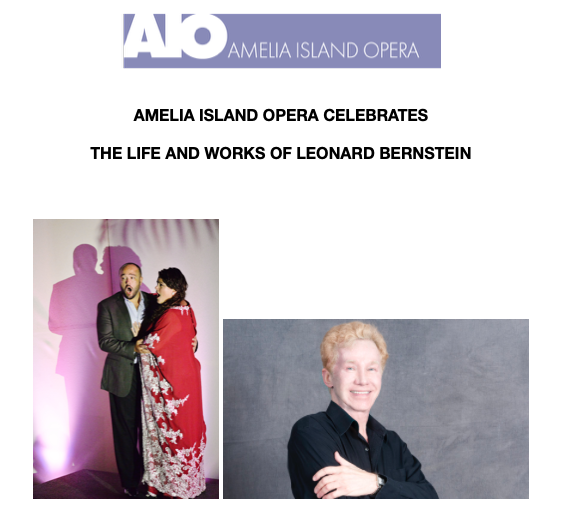 By Bernstein: A Musical Celebration of his Life and Works

Amelia Island’s local opera company, Amelia Island Opera (AIO), is delighted to announce an evening featuring the music of Leonard Bernstein. “Lenny,” as he was affectionately called, was a world-renowned composer, conductor, musician, educator, and humanitarian. He was described by American music critic and journalist Donal Henahan as “one of the most prodigiously talented and successful musicians in American history,” and Bernstein has the accolades to prove it: seven Emmy Awards, two Tony Awards, 16 Grammy Awards, and the Kennedy Center Honor. His most popular works include West Side Story, Candide, and MASS, which was commissioned by Jacqueline Kennedy for the opening of the John F. Kennedy Center for the Performing Arts in Washington, D.C.

The performance will feature highlights from popular Bernstein works, including “Maria,” “Tonight,” and “Make Our Garden Grow,” sung by soprano Robyn Marie Lamp and tenor Derrek Stark, and accompanied by Juilliard-trained pianist Gordon Roberts, who was a protégé of Bernstein in his 20s. The musical portion of the evening will be accompanied by tales from Bernstein’s interesting life, including personal ones from Roberts himself. “The thing most people don’t think about when they think of Bernstein is that he loved to teach,” Roberts said. “This was the reason he created the Young People’s Concerts early in his career as Music Director of the New York Philharmonic. All I needed to do was mention to Lenny that I was conducting or performing a certain work and the next thing I knew we were sitting on the floor of his studio poring over his scores, even if a dinner party was going on in the next room.”

Roberts met Bernstein through a mutual friend, mezzo-soprano Jennie Tourel. Bernstein composed many works for Tourel, and Roberts was her accompanist as she concertized worldwide. Roberts went on to create his own weekly television show in Scranton, PA, called “Musical Minutes,” which featured live interviews and performances with musical guests.

Soprano and AIO co-founder Robyn Marie Lamp met tenor Derrek Stark when they were singing together one summer at Caramoor Center for Music and the Arts in Westchester County, N.Y. They became fast friends and have sung together countless times since that first meeting. “One of AIO’s missions is to elevate the voices of emerging artists, and that is exactly why we invited Derrek to come and be a part of this concert,” Robyn said. “To be able to provide opportunities for emerging artists while providing world-class singing to the Amelia Island community is why we founded AIO,” said AIO co-founder and President John Tibbetts.