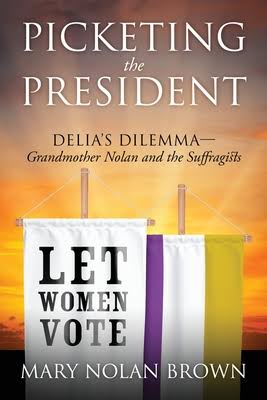 Join us at The Book Loft at 214 Centre Street in Fernandina Beach, Florida, on Saturday, April 9, from 1 – 3 p.m. when author Mary Nolan Brown will be giving a reading and signing her debut historical novel, Picketing The President: Delia’s Dilemma – Grandmother Nolan and the Suffragists.

Picketing The President begins in Fernandina, Florida, in December of 1918 as Delia Nolan prepares to board the train for Jacksonville to join her grandmother Mary Nolan (a prominent Jacksonville socialite (who) was incarcerated for picketing the White House in 1917) for a trip to Washington, D.C., to picket for women’s right to vote.

Mary Nolan Brown is a native of Fernandina where five generations of her family have lived. She retired from a career in administration in public and private education and the Georgia Historical Society. She is a member of Coastal Kids Writers & Illustrators and the Savannah Writers Circle. She and her husband live near Savannah, Georgia, on Wilmington Island with their two rescue cats George and Gracie.

Other Books: “Trouble In Texas” will be out later this year. Mary Nolan Brown is currently preparing a sequel to “Picketing the President.”