The board attorney reminded commissioners about public records in personal accounts and on personal devices. 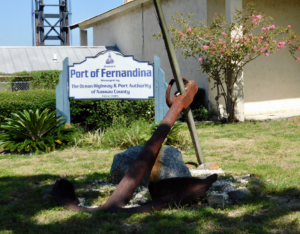 The ongoing process to professionalize the operations of the Port of Fernandina’s Ocean Highway and Port Authority (OHPA) took a step forward as the board’s attorney sought feedback on reorganizing and streamlining board policies. Public records access — an ongoing issue involving the port and a source of active litigation — was a notable focus.

“There are some things that I’m going to recommend that we change, given some recent activities,” board attorney Patrick Krechowski said at Wednesday night’s meeting. “But overall, the way this board is structured, the way this board likes to operate, I don’t see a need for wholesale change.”

He also brought up the idea of an annual state ethics training program for board members. Krechowski determined the training is not required for the board, but may be a good idea.

“I encourage you all to do that. It’s not necessarily fun, it can be annoying, but it can also protect you,” Krechowski said.

“I think it’s good to do ethics training,” Hill said. “I think that it would improve the way we (operate).”

Krechowski is working on a new public records policy, but modeling it on municipalities could prove problematic because the OHPA simply doesn’t have the staff these policies usually demand.

“It has to be tailored to who we are and what we are, but obviously … this has been a big issue, taken a lot of time,” Krechowski said.

Hill pointed out they need a policy to deal with text messages, retention of them, what constitutes a public record, and what to do when there’s a public record on a personal device.

“If you’re not able to make that available for inspection, then you need a system for retaining it,” Hill said. “So, what the Florida (Commission on Ethics) has advised me is that if you get a text message, screenshot it and send it to the admin. You should have a response on your text messages that’s sort of a canned response that, ‘I don’t text public business. Please email me at this address for public business.’”

She related a story about sending a personal text to someone at the city of Fernandina Beach, and received an automatic response about public business and where to send the email. Krechowski said the policy should be not to text OHPA business on personal mobile phones, and advised commissioners on their email activity.

“So, especially with texting, it’s a situation that all government entities in the state of Florida deal with on a daily basis.”

Steps in the right direction. Listen to counsel.