“Assistant County Attorney Denise May stated, “Development rights were already granted back in 2007,” and continued by saying, “Approval of this plan is very ministerial.”

All was going according to plan . . . as to the efficient consideration of some 26 plus items on the agenda at the Board of County Commissioners meeting on February 28, 2022.

On that evening, however, the meeting did not adjourn until well past 9 PM, having started at 6 PM. 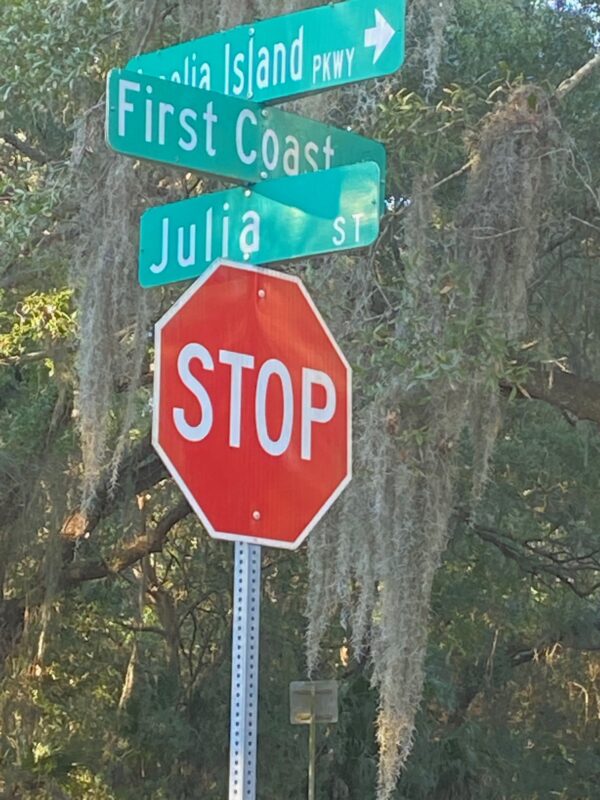 While the agenda was indeed long, most items were approved without much discussion or debate until the consideration of the Final Development Plan (FDP) for a 3.21 acre parcel located at the crossroads of Julia Street and First Coast Highway. And, it was this issue that was responsible for most of the individuals who filled the room to capacity.

The development of which garnered a lot of attention over the years as it relates to tree canopy issues, the location and width of driveways, wetlands regulations, and traffic studies to name just a few of some past headline-grabbing items.

Planning and Zoning approved the FDP in February (click here for article) and in so doing, helped pave the way for a new development on the south end of the Amelia Island – a development that will consist of 15 residential units and 4,500 square feet of commercial space on the space that once housed the former sales office for the Summer Beach Resort, which has sat vacant for some time now.

Commissioner Aaron Bell, (who represents the areas of South Amelia Island, Nassauville, and O’Neal, i.e. District 2) is the current Chair of the BOCC.

As such, Commissioner Bell had to ask for another commissioner “to take the gavel” so that he might be able to make a motion.

“I am very familiar with this area,” said Bell. “My daughter goes to school near there and my mother was one of the six motor vehicle accidents”  in the area.

Once the transfer of the gavel took place with BOCC Co-Chair of the BOCC Jeff Gray (representing District 3), taking the helm, Commissioner Klynt Farmer (representing District 5) asked if the property was “a CLAM candidate?”—referring to the new Conservation Land Acquisition & Management (program) and whether or not it might be feasible to be purchased through such. Farmer went on to describe the CLAM program as being “stood up.”

In response to that comment, County Manager Taco Pope said: “It’s all about cash and working the deal. Anything is possible. We are moving toward a referendum. As of today, no conservation acquisition is possible.”

Said Commissioner Gray, “this is not a zoning change . . . not a FLUM change (Future Land Use Map) . . . I’m worried that there will be costly litigation.”

Assistant County Attorney Denise May supported that comment by stating, “Development rights were already granted back in 2007,” and continued by saying, “Approval of this plan is very ministerial.”

Commissioner Bell made a motion to oppose the FDP but his motion died for lack of a second.

Interesting to note is the fact that with the exception of the developer’s attorney, all speakers opposed the FDP, citing among other things what was seen as a flawed traffic study conducted in August of 2021 (in the midst of the pandemic) in addition to wetlands and tree canopy issues.

I have taken Taco Bell’s quote out of context, but says it all for this county and city regarding development, “It’s all about cash.”

If Taco Pope married Aaron Bell he would be Taco Bell

Go ,go and go and this island will be too crowded in a few years, stop talking about greenland and canopy, environment, build bigger and higher and grab the money, hypocrisy?.?have a nice day

It appears that Pope’s comment about it being all about cash was that funding for CLAM has not been provided. This is a typical Republican ploy: starve an agency or program of funds so it cannot do its job, blame the agency or program for not doing its job, and then institute some kind of “reform” to get what they really wanted in the first place. Examples: public schools (so they can fund religious schools with taxpayer dollars) and the I.R.S. (so they cannot prosecute wealthy people of tax evasion and fraud). Conservation of undeveloped lands is not a priority of our current county commissioners. It all comes down to who you vote for.

“Conservation of undeveloped lands is not a priority of our current county commissioners. It all comes down to who you vote for.“
It never has been a priority. It’s all about the money, regardless of what “party” they represent. If it looks like a politician and walks and talks like a politician DON’T vote for it, period. You people can disagree and debate till you’re all dead and gone but Amelia Island will be choked to death one day because of your reading and worthlessly commenting on issues you refuse to do anything about. Nuff said.

Actually this is a false statement. You might recall that the 50 acre tract of land at the south end of the island was voted by the commission to deny the development and a height ordnance was also passed.

Scott, my recollection is that the developer withdrew their rezoning request, not that the Commission actually voted against it, but I may be wrong. The current zoning of that property still allows development, but not in the manner and density the developer proposed. Development within the parameters of the existing zoning will not require any BOCC review/permission.