Almost twenty years ago, the City Commission created a Community Redevelopment Area (CRA) as permitted in accordance with State statutes. The intent of a CRA is to introduce a dedicated source of funding to economic redevelopment of a specific area. The creation of a CRA must be preceded by a Finding of Necessity, detailing the shortcomings (typically blighted buildings or inadequate infrastructure). The City completed the required Finding of Necessity and created the CRA in 2005. The CRA district primarily includes Amelia River waterfront properties, but also includes several inland properties along N. 2nd Street near Alachua and Broome Streets and other parcels near City Hall on S. 2nd Street.

For many years, the CRA languished due to lack of activity within the area, evidenced most vividly by current photos of the waterfront that are sadly and remarkably similar to photos of the same area from 2005. Because of this lack of redevelopment, the property values did not increase, resulting in no new funding to support activities within the CRA. Through roughly 2019, the only activity within the CRA was the City’s purchase of a waterfront parcel (and subsequent demolition of the crumbled building). 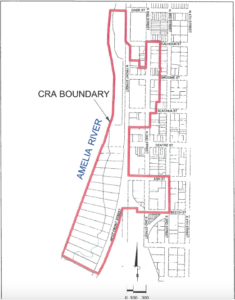 The first significant private redevelopment began with the construction of the townhouses adjacent to City Hall, the site of a former lumberyard. With that successful redevelopment, the CRA began to receive its first infusion of significant revenue about two years ago. Several additional projects are now in various stages of planning and redevelopment in the CRA east of the railroad tracks on N. 2nd Street, Alachua Street, and N. Front Street. On the river side of the railroad tracks and N. Front Street, the status quo of inactivity unfortunately remains.

With the availability of new funding, the City Commission (which also sits as the Community Redevelopment Agency), has reconstituted the Community Redevelopment Area Advisory Board (CRAAB- yet another government acronym). The CRAAB had previously existed, but, mainly due to a lack of funding leading, in turn, to a lack of purpose and direction, the CRAAB was disbanded a few years ago. The re-formed CRAAB was appointed by the City Commission in January and convened its inaugural meeting earlier this month. The members of the CRAAB, selected to represent specific backgrounds and experiences as required by local regulations, are David Cook, Frank Damato, Lisa Finkelstein, Alan Hopkins, Jack Knocke, Alan Ortbals, and Tina Smith.

The initial meeting was mostly administrative in nature. Mr. Knocke was selected to serve as the Chairman to preside over the meetings. Significant time was dedicated to educating the members of the provisions of the State of Florida Sunshine Laws. The Sunshine Laws are intended to promote transparency of government actions: members may not communicate with each other about any business related to their service on the board and all communications related to their duties (irrespective of how communicated and to whom) must be retained and are subject to public records requests. It is most often that volunteers unfamiliar with Sunshine Laws run afoul of those regulations than do staff members who have operated under those provisions for years. The Sunshine Laws apply to every City board and commission, including the City Commission.

At the first meeting, Mayor Lednovich also spoke on behalf of the City Commission, providing the initial charge to the members of the CRAAB. He called for the members to craft three goals to present to the City Commission, including, perhaps most significantly, an effort to review and update the original 2005 CRA Plan. The CRAAB will consider additional goals at its next meeting (6:00 PM, March 2, 2022; City Hall).

Also on the published agenda for the March 2 meeting are the consideration and adoption of Rules of Procedure for the conduct of CRAAB meetings, the approval of the draft CRA annual report (a new statutory requirement), and the review and consideration of a letter to waterfront property owners inviting those owners to meet with the CRAAB and City staff to discern and promote redevelopment opportunities.

The new developments within the CRA are exciting and will be significant additions to downtown. City efforts in the CRA this year will focus on completing the seawall and Riverwalk at the south end of Front Street, the railroad safety improvements at Ash and Centre Streets, and the re-opening of the Alachua Street rail crossing.

It will be a busy year downtown. To learn more and to stay abreast of developments and projects, please follow the CRAAB, the City’s website, and the City’s social media pages.