“Tiger Island has no zoning. Consequently, the County Planning Department is proposing that it be zoned Open Rural (OR). By doing so, North Florida Land Trust will be able to get it appraised and finally conserve it.” 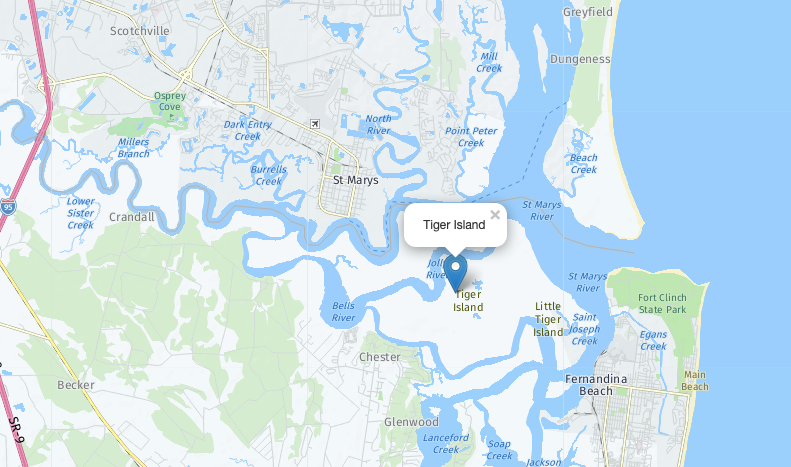 Why does this parcel rank so high on a most wanted list? Because Tiger Island is a barrier island . . . just like Cumberland Island and Amelia Island –and Tiger Island is one of the southernmost sea islands in the area. As such, these “sea islands” help to protect surrounding areas from erosion, flooding and storm surge. Not to mention the fact that they provide and protect the habitats of so very many species – including manatees, gopher tortoises, sturgeon and countless birds.

In December of 2021, the North Florida Land Trust (NFLT) heralded news that it and the Florida Fish and Wildlife Conservation Commission had been awarded a $1 million grant from the US Fish and Wildlife Service’s National Coastal Wetlands Conservation Grant Program to preserve the salt marsh and maritime forest that is Tiger Island.

The ultimate goal is to have Tiger Island become part of Fort Clinch State Park with ongoing maintenance and management provided by Fort Clinch’s parent organization—the State of Florida’s Division of Recreation and Parks.

Getting any parcel of land protected is no easy job. To quote Jim McCarthy, President of the North Florida Land Trust (NFLT), “conservation moves at glacier speed,” . . . and when he said it, he noted that he was taking a bit of poetic license from a developer he knew some time ago who was talking about his own line of business.

To get any particular piece of land protected, it takes a lot of coordination, cooperation, collaboration . . . and of course, community support. Here is an outline of some of the essential elements and how they relate to Tiger Island.

#1 A WILLING SELLER
Many years ago, the owners of Tiger Island may have envisioned developing the acreage for housing or hotels . . . but not anymore. During a recent phone conversation with the NFLT, the owners have committed themselves to preservation. In fact, there is already a signed contract that basically “seals the deal” which will preserve in perpetuity, this island paradise.

#2 A CRITICAL MASS OF INDIVIDUALS/ORGANIZATIONS DEDICATED TO THE CAUSE
In addition to the main funding sources already mentioned, the Forever Florida program has promised a matching $1 million grant.

#3 PRIVATE SUPPORT
In addition to support at the federal, state and local levels, add to that list is an anonymous donor who has pledged to provide any additional funds necessary to complete the purchase and get the conservation program well underway – connecting a network of protected lands and waterways along the Florida-Georgia line.

It seems Tiger Island has never been zoned – despite Florida law which requires that every acre of land in the State be zoned.

Some say the omission of Tiger Island was a mere “Scrivener’s Error” when Florida went “digital.”

Regardless, Tiger Island now needs to be zoned and that step in the process cannot be “skipped” because an actual zone classification is needed so that the land can be appraised.

Holly Coyle, Assistant Planning Director for Nassau County confirmed that an application had been received (from the owners) to begin the re-zoning process.

And, as any homeowner understands, an appraisal is a normal part of the buying/acquisition process. For a potential homeowner, however, the land on which the potential buyer intends to build/buy has already been zoned. Not so with Tiger Island.

Confirmed Ms. Coyle, “it will be a few months before it actually gets to public hearing.”

In a follow-up email, Coyle went on to explain: “The rezoning process typically takes 3-4 months. It requires one public hearing before the Planning and Zoning Board, who will make a recommendation to the Board of County Commissioners (BOCC). The BOCC will have one public hearing and will either approve or deny the amendment.”

Said Mr. McCarthy (of the NFLT), “we do not need to worry about development as a result of this.”

To that end Lyn Pannone, of the Amelia Tree Conservancy, had this to say, “We are grateful that North Florida Land Trust is working toward preserving and conserving Tiger Island. . . they have secured grants for the purchase but in order to finalize the transaction they have to get it appraised. In order to get land appraised, it must be zoned.”

Ms. Pannone went on to say: “Tiger Island has no zoning. Consequently, the County Planning Department is proposing that it be zoned Open Rural (OR). By doing so, NFLT will be able to get it appraised and finally conserve it.”

Said Pannone . . . and as practically every conservationist would agree . . . “this is a winning outcome for the community.”

So glad to hear there are so many green lights to preserving Tiger Island!

Wonderful- thank you for sharing this with us.