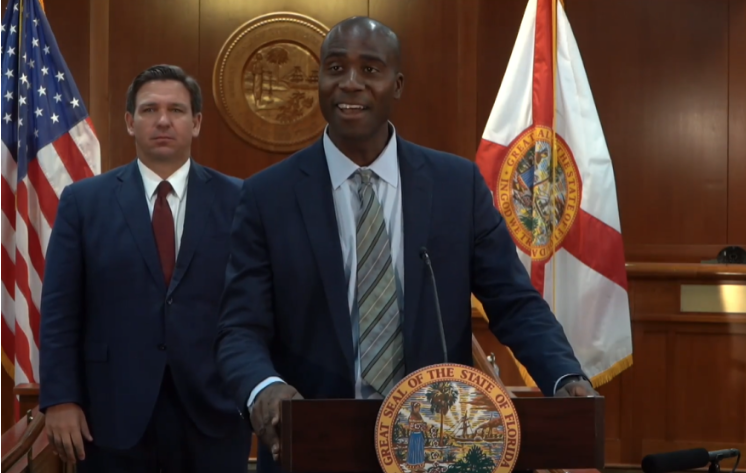 Senate Democrats on Wednesday stormed out of the first confirmation hearing of Joseph Ladapo after a frustrating back-and-forth between legislators and the Florida Surgeon General appointee of Gov. Ron DeSantis.

Ladapo essentially stonewalled Democrats, refusing to answer simple yes or no questions on whether vaccines or masks work. He also seemed unable to answer questions on other health problems in the state, such as whether Hepatitis A remains a problem.

After Democrats left the room, Republicans on the Senate Health Policy Committee quickly voted in favor of confirmation. Eventually, the full Senate will be asked to vote on his appointment as Surgeon General and head of the Florida Department of Health.

Democrats complained to Committee Chair Manny Diaz about Ladapo’s answers, which left members more obfuscated than enlightened. Diaz, who wanted to keep the meeting orderly and running on time, empathized and asked Ladapo “can you try to be more concise.”

“I consider vaccines in the same way I consider other medical care,” Ladapo said when Book first asked the question. “What we care about clinically is whether they are safe.”

Book asked the question an additional four times before, frustrated with his lengthy indirect answers, she moved onto his position on mask mandates only to get similar vague responses.

Then she moved on to his interaction with Sen. Tina Polsky.

“Do you regret how you treated our colleague?” Book asked Ladapo.

“I have sympathy for her and for other people who are diagnosed with serious conditions. I think it’s important to recognize that. Despite the politics of our environment, it’s a human thing. I sincerely wish her the very best, her and her family. ” Ladapo said, adding, “I think it’s very important to respect people’s personal preferences. And I think that’s a mutual issue.”

Ladapo in October made an appointment to meet with Polsky in her office. Polsky repeatedly asked Ladapo to put on a mask, telling him she had a serious medical condition. When Ladapo refused, Polsky asked him to leave. Polsky later revealed she had been diagnosed with breast cancer.

Florida Politics was the first to report the story, which made national headlines.

Senate President Wilton Simpson, a Trilby Republican, sided with Polsky in the matter, twice condemning Ladapo for his actions and comments calling them unprofessional.

Democrats returned to the Senate Health Policy Committee after the vote to continue debate on the remainder of the agenda, which included a bill to revamp the state’s mandatory Medicaid managed care program.

Ladapo was picked to lead the Department of Health last fall by DeSantis who was searching for a replacement for Scott Rivkees, the first state surgeon general. The Governor during a Wednesday campaign news conference lauded him as a “superstar” whose positions on COVID-19 had been proven largely correct.

DeSantis also predicted that Ladapo ultimately would be confirmed overwhelmingly by the Senate.

“I think Ladapo is a superstar,” said DeSantis, who contended that many of his observations about how to respond to COVID-19 had been proven true.

Meanwhile, Ladapo told reporters after the meeting that his goal was to accurately answer the questions he was asked. He also said that he had no hard feelings for the Democrats who walked out of the committee.

“I certainly wish them well. I have no ill will toward them,” Ladapo told reporters. “And I hope that we can work together on issues of public health relevant to Floridians.”

We can quibble about Lapado’s responses, such as being shallow and unprofessional about the goal of medical care to ascertain if it is safe and not about whether it works, but in the end, Lapado is just a Republican politician with a medical degree. And that makes him doubly dangerous.