Can the irresistible force of public opinion budge an immovable object — or in this case, an immovable waterfront property owner?  Proponents of shore stabilization and a waterfront park are about to find out.

Work continues to stabilize the shore of the City-owned property in the Community Redevelopment Area south of the boat ramp.  The next area targeted for stabilization is privately owned property immediately north of Parking Lot A, which lies between two pieces of City-owned property.  Commonly called the Simmons-O’Steen property, this parcel is located at the lowest point along the river and is subject to flooding which sometimes even extends east of the railroad during heavy rains and high tides. 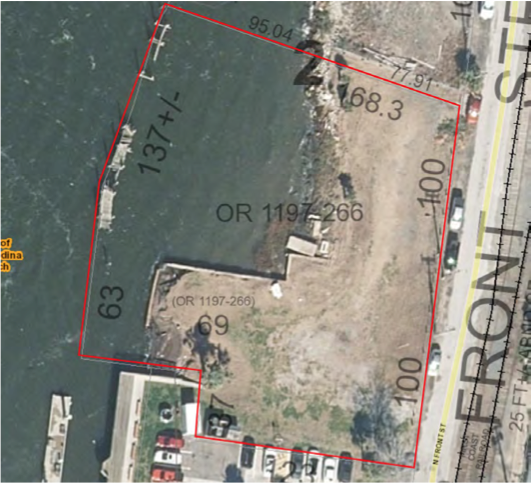 Litigation has been rejected as a means to acquire the property, but the fact remains that this parcel is key to the City’s efforts to stop downtown flooding and to connect City property via a seawall and pedestrian walkway.  As Commissioner Chip Ross pointed out during the CRA’s January 18 meeting, without some willingness of the property owner to work with the City, efforts to stabilize the shoreline seem doomed.

Acquiring easements for the seawall and walkway would provide public access to the riverwalk.  The easement would be officially recorded in perpetuity, and would not restrict the owners’ current riparian rights.  The City would assume and insure any liability connected with the easement area,  The City would assume costs to build and maintain the seawall and the riverwalk.

The purchase option for the required 3,264 square feet of property required, based upon the $60/square foot appraisal provided by the property owners in May 2021, would cost the City $195,840.

In presenting four possible options for improving Front street along the Simmons-O’Steen property line, Ross came up with a similar easement agreement or purchase costs ranging from $5,520 (92 square feet) to $371,560 (5,526 square feet).  The most expensive scenario involved adding not only curbing and sidewalks, but also significant parking areas.

Ross asked for other possible solutions to the dilemma from the other Commissioners. Commissioner Bradley Bean suggested that the Front Street problem could be alleviated by making that a one-way street.  Other Commissioners did not support this suggestion.

Vice Mayor Len Kreger emphasized, “The point of all this is to protect the City from storm water, storm surge and sea level rise, based upon science.  I agree we need to move forward.  I’d like to see staff come up with all alternatives.  We did talk about assessments earlier, but for Simmons-O’Steen, that would be an assessment for the entire area protected [by the seawall].  I think we need to do this in a hurry because resiliency money will soon become available for cities.  If we don’t have the data, and we are not shovel-ready, we won’t get it.”

Bean reiterated his steadfast opposition to use eminent domain as a way to acquire the property.  Instead he cited work in other communities where property owners worked with local government and paid for their own portion of the seawall.  He claimed it would be a big asset for private property owners to have a seawall and public walkway going through their property.  He asked that this option also be brought to the property owners.

“Instead of having to lease or buy this property, let’s find a way to work with the property owners to connect up both metaphorically and literally,” Bean said.

Mayor Mike Lednovich asked, “What are the next options if the Simmons-O’Steen property owners will not negotiate or allow the purchase of the land?”

Ross replied, “There are two options:  go home and abandon this whole thing or reconsider eminent domain.”  He said that fundamentally he agreed with Bean and his opposition to using eminent domain to acquire property.  “But when one person holds up the process, you are going to have to look city residents in the eye and say ‘This is why we failed.’  If we don’t get access to this property, we have failed.  I don’t see any other options.” 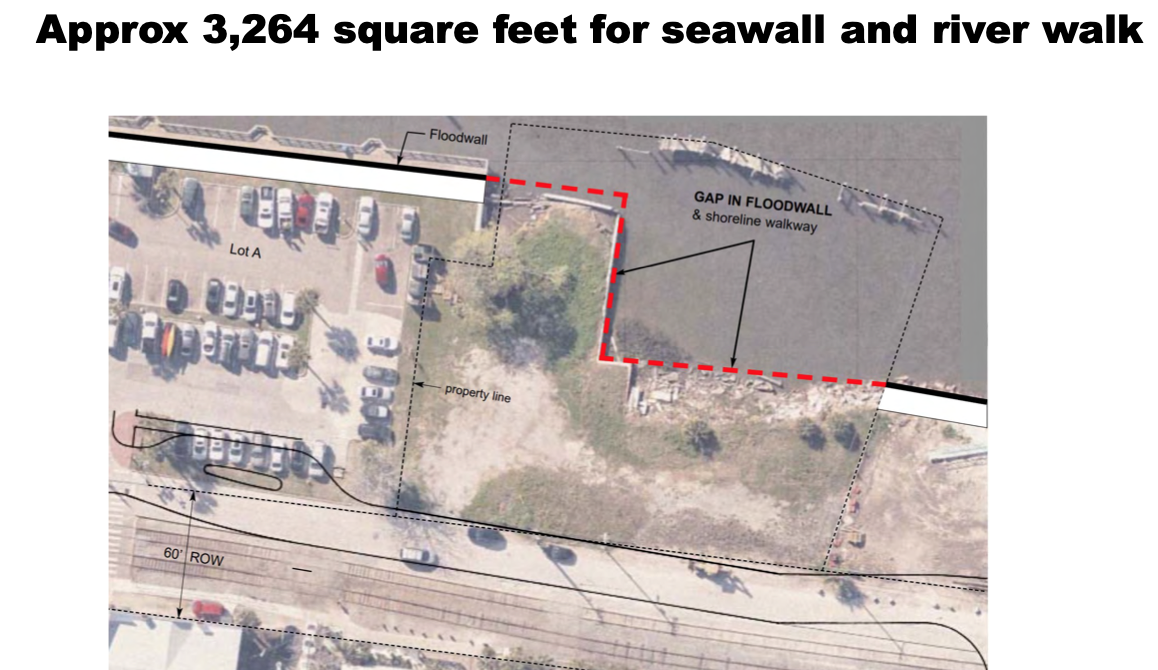 After considerable discussion the CRA voted unanimously to direct the City Manager, City Attorney and appropriate City staff to approach the property owner about the viability of an easement, an outright purchase, or a public private partnership within the next two weeks and to report back to the CRA in 6 weeks.

Ross made a second motion to piggyback on the previous motion that would add discussions about obtaining use of the Simmons-O’Steen property along Front Street as well.  Bean seconded this motion, which passed unanimously.

Not discussed during this meeting was the requirement that view corridors be maintained along waterfront lot lines.

Thanks so much for this articulate update on this issue. If I’m reading the article correctly, we could pay about $200,000 for that waterfront property? Sounds like a steal!

That would be stealing. In June it was reported here:

The appraisal completed by Diskin Property Research, a Tallahassee firm selected by the property owners, valued the property at $2.3M.

The City appraised the property at 800K. After the 2.3M came in they dropped any eminent domain efforts. The property owner then went after the City to pay his legal fees spent to defend against the E-D action.

I doubt the ideas expressed in this article will gain much traction with the owner as any encroachment on their property would probably diminish its value. I think the only deal possible would be an all or nothing proposition that would be expensive. Possibly, the City may revisit the E-D efforts as Chip Ross suggests. As he states…..options are limited.

No, the $200,000 ($195,840) would be ONLY for 3,264 sf of the property not for the entire parcel. That valuation uses the owner’s appraisal of $2.3 million for the entire property. The City bearing the cost of the seawall would provide substantial benefit as the property continues to erode. But as Doug noted, the owner would have to weigh that benefit against the loss of approximately 10% of the current property (.88 acres or 38,333 sf).

Thanks for the maps and the overhead views – terrific! Now I see clearly where we are talking about.