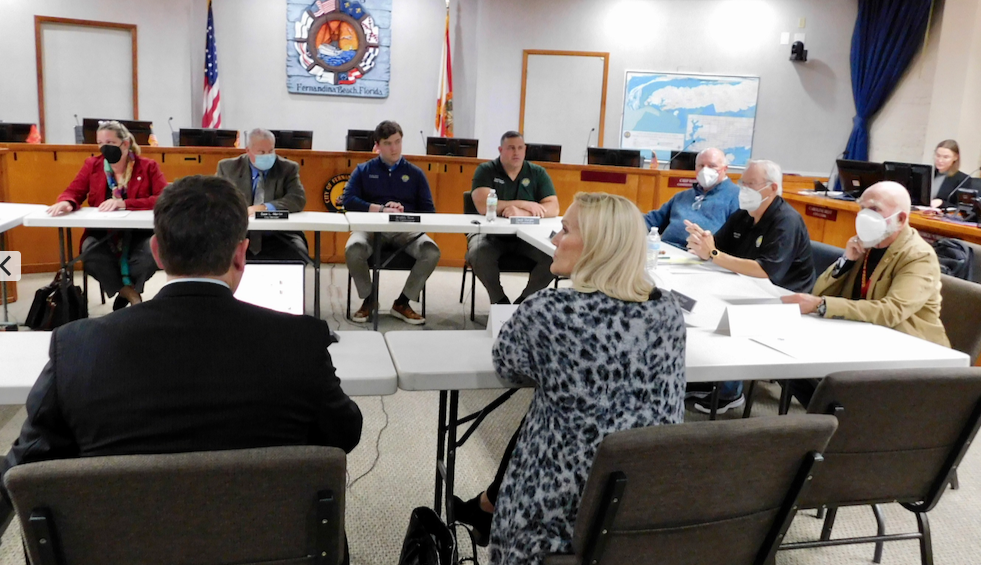 Superintendent Burns kicked off the meeting, which lasted barely an hour, with an update on the District schools.  She reported that the A-rated District has received the 4th highest rating from the State of Florida.  Graduation rate is 93.4 percent.

Burns spoke to the impact of rapid county population growth on the School District. In doing so, she explained that the state will not authorize building new schools based upon population projections.  Rather, the state needs to see a demonstrated overcrowding of a school before that can happen.  She said that the NCSD currently has 56 portable classrooms around the County to handle student overflow.  The new elementary school recently constructed at Wildlight is already out of space.

Targeted locations for new schools under the NCSD Vision 2032 Plan are Amelia Concourse, the area around Tributary development on the west side of I-95, and William Burgess Boulevard.  The NCSD whenever possible works with developers to share the cost of the new school and minimize impact on existing schools.  To date the NCSD has been able to fund its share of new schools through savings.  However, because the growth rate is so rapid, the NCSB is widening its search for ways to bring new schools and expansions of existing schools on line more quickly.

The NCSD is also working with Nassau County to identify County-owned land parcels that might be available for new schools.

The subject of school impact fees was also addressed.  The NCSD is seeking cooperation with the City and the County through an updated interlocal agreement (ILA) to use the same forms and criteria for determining school impact fees throughout the County and its municipalities, regardless of the development’s physical location.  The City will participate in this project to simplify and clarify school impact fees through its representatives City Attorney Tammi Bach and Planning and Conservation Director Kelly Gibson.  The final ILA, anticipated to be ready for final adoption in 2 months, must be approved by the NCSB, city and county governments in the County.

City Commissioner Chip Ross asked Superintendent Burns and the NCSB if the City of Fernandina Beach could have the right of first refusal on any land parcels that the NCSB wants to sell.  He cited the public flap over the land that the NCSB sold to a developer for Amelia Bluff. Burns agreed to add Ross’ item to a future NCSB meeting agenda, while reminding Ross that the sale of that property had been publicly advertised.  Lednovich said that such an agreement could work both ways, with the City agreeing to provide the right of first refusal to the NCSD if it proposes to sell City-owned property.

Ross acknowledged that his primary concern was for the property currently occupied by the NCSD administration on Atlantic Avenue.  The NCSD has no current plans to vacate that property.

Fernandina Beach Vice Mayor Len Kreger asked that City residents be permitted to use certain outdoor NCSD recreation facilities, such as tennis courts.  NCSD Attorney Brett Steger explained that the Parkland school shootings had brought about strict state regulations regarding school security, raising the question of whether those outside the school system could be permitted to use school facilities.

City Commissioner Bradley Bean once again renewed his request that the NCSD remove the fence along the southern edge of its Atlantic Avenue property.  He noted that the fence is not connected to a gate and cannot keep trespassers off the property.  Both Superintendent Burns and School Board Chair Dr. Donna Martin renewed their objections to removing the fence, stating that it is no barrier to those who want to use the property for recreation purposes.

At the end of the meeting, Vice Mayor Kreger said, “This is one of the meetings that I actually enjoy.  We all get along, and people listen to each other.”

Superintendent Burns remarked, “I do appreciate that we come together.  We are very deliberate about planning these meetings  so that we can discuss matters that are important to all of us.  It’s important that we continue to talk.  We are here to work together.  Our business is students, our communities and our parents.  Your business is the citizens of the City.  We want to collaborate and continue working together.  It doesn’t mean that we’ll always agree, but we can continue to work together.”

School Boards are like motherhood and apple pie. Too bad they don’t operate more like a business. It costs a lot of money to operate the property on Atlantic. Most other County departments have moved west off the Island to a more central location in the Yulee area. The School Board has a closed school property which would be a much more central location for County residents. The Atlantic property has deed restrictions which don’t allow a sale to the public. It’sa perfect location for a new City Hall. The City should buy the property which would give the School Board money to refurbish the school for their operation.
That would be a win-win for all the residents of Nassau Country!

Spot on Lou. I had heard in the past that the City actually owned the land where Atlantic Elementary was located and donated it to the School Board with the provision that it would be used for educational purposes. Haven’t been able to verify that claim, but I agree that it would be a good location for a new City Hall.
As to the fence, that action was a spit in the face of the City several years ago when the request was made by the Commission to remove the fence as part of the Amelia Bluff right of way discussions. Instead the School Board removed the existing fence and installed a brand new one. As noted, it provides absolutely no benefit from a security standpoint.