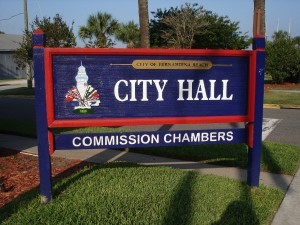 At its January 4, 2022 Regular Meeting, the Fernandina Beach City Commission (FBCC) unanimously supported passage of Resolution 2022-06, approving an Interlocal Agreement with the Ocean Highway and Port Authority (OHPA) as the sponsor of the navigational channel in the Amelia River.  OHPA voted to approve this agreement at their December 8, 2021, meeting. This Interlocal Agreement provides that OHPA supports moving the navigational channel to the west and that the City assumes all responsibility as assigned by the Army Corps of Engineers.

Since the navigational channel has been inactive for many decades, the cost of “moving” the channel does not, at this time, involve any costs associated with dredging the channel. Should operations in the channel be restored, the City would be responsible for the costs of dredging the relocated channel. The United States Army Corps of Engineers has not paid any costs associated with the maintenance of the navigational channel since approximately the mid-1980s.

City staff is not aware of any plans to make use of the federal channel for the foreseeable future.  Commissioners acknowledged that there is a remote possibility that the City could be on the hook for future dredging costs, should the channel be activated.  However, the only party to utilize the channel would be Rayonier Advanced Materials.  That firm has provided written endorsement of the City’s request to move the channel.  Also, the Army Corps of Engineers (ACE) would need to spend tens of millions of dollars to dredge the turning basin at Rayonier to make the channel usable.

The move will allow the City to expand its marina northward into deep water.

City Manager Dale Martin expressed the City’s appreciation to OHPA for moving this item forward.  “It’s been a long time coming,” he said.  “I especially thank [OHPA] Chairman [Danny] Fullwood, who has come before you pledging support as well as the other OHPA Commissioners.  There are times when we have disagreements with OHPA, but I think this demonstrated a willingness to work together for the benefit of the entire community.  So thank you to the OHPA Commissioners.”

The channel relocation was approved by the U.S. Congress 21 years ago.

Ms Rae, the immediate impact and why this was requested is that with the current alignment of the Amelia River channel, the City could not extend the breakwater/docks on the northern side of the marina as they would infringe on the existing boundary of the channel. With the approval of the realignment of the channel, that activity can happen. All the engineering studies have shown that maintaining the docks on the southern side will require major dredging every couple of years at $400,000 – $500,000 or more. With the greater current flow on the northern side, the dredging will be less frequent and less quantity will be required. There is a long and convoluted history of the channel boundaries and these efforts. Still a long way to go to get final approval but it is a start in the right direction for the future of the marina.

Good to see this move forward after years of inaction due to the poor relations between OHPA and the City. With the formal documentation of the movement of the navigation channel the City can (again) start making plans to relocate the southern docks to the north side and significantly reduce the dredging expenses for the marina.

So the plan is to eventually abandon the southern docks, even for boats with minimal draft?

This is a BAD decision! The Federal Channel needs to be de-established (removed) south of buoy 10 (below the Port of Fernandina and its turning basin). The history of this channel down to Rayonier is interesting and it has not been used for over 40 years. Rayonier has only used the channel for barge traffic and since the Federal Channel down to Rayonier co-insides with the Inter-coastal Waterway (ICW), barge traffic would still be supported with the removal of the Federal Channel. The Army Corp of Engineers (ACE) has not dredged the Federal Channel South of buoy 10 because it is not a high priority and they don’t have the funds. The ACE is required, by federal law, to maintain all Federal Channels in the United States and they do a great job of that based on available funding. Another issue to understand is that when the ACE changes their rules, existing structures are not grandfathered in. We found this out when we repaired the North and South Attenuators in the City Marina that were damaged by hurricane Matthew. The ACE had changed their setback requirements from the Federal Channel to 100 feet from the previous 80 feet. This is what caused the City to want the Federal Channel moved to the west. What would happen if, in the future, ACE increases the setback even more and this issue is revisited again. Now the City of Fernandina Beach is going to agree to fund any necessary dredging of that channel. I would not be a bit surprised that, if after this document arrives at the desk of the local representative of the ACE, there will be a need for dredging. Even if they don’t, the City will be under the gun for any future ACE decisions.The tax payers of Fernandina Beach will bare this financial burden.

Joe, what makes you think that after 40 years of no dredging there will be such a need in the future. While I agree that de-establishing the channel would be the best course of action, that effort can continue but is likely to take decades to accomplish given the current dysfunction at the federal level.

Speculate more, do less. A mantra in Fernandina – over and over. See Dave Lott’s comments below and above.