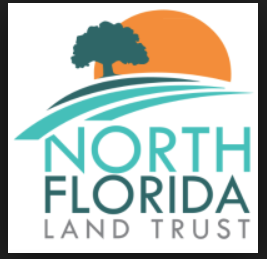 “Little Tiger Island has been on our radar for years and we have made several attempts to acquire it in the past,” said Jim McCarthy, president of NFLT. “We have been working with the owners and have reached an agreement.  We hope to use this grant to secure funding from the Florida Forever program to protect this environmentally significant property.” 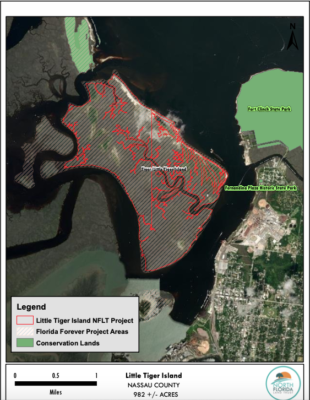 The $1 million grant is expected to be matched with $1 million from the Florida Forever program along with additional funding from a private donor to reach the $2,070,010 needed to protect the island. The property will connect a network of protected lands and waters along the Florida-Georgia border. The national and state preserves and parks stretch from St. Andrew Sound in Georgia to the St. Johns River and include Fort Clinch State Park, Cumberland Island National Seashore and the Fort Clinch Aquatic Preserve.

Little Tiger Island was among 25 projects in 13 coastal states that were chosen to receive funding through the National Coastal Wetlands Conservation Grant Program which awarded more than $20 million in grants. These projects will protect, restore or enhance coastal wetlands by protecting the areas from the effects of climate change.

The preservation of Little Tiger Island will help protect the area against flooding, erosion and storm surge. It will safeguard the habitat of many species of fish, birds and other wildlife and will help support fishing and tourism. It could also be open to passive recreational opportunities in the future. Once acquired, Little Tiger Island will become part of Fort Clinch State Park and will be managed by the State of Florida’s Division of Recreation and Parks.

This is very encouraging news, but one caution: “preserving” or “protecting” is NOT synonymous with management, especially by Florida’s DEP and its state park’s division. Sites like Lt. Tiger require special protections and managements not practiced in our state parks. Unrestricted access and recreation will swiftly degrade and destroy the island’s sensitive natural resources and listed species.