Have you looked at the Historic Downtown Post Office lately?

A spokesperson for the USPS has reported that the USPS Facilities Division coordinated the arrival and installation of the new light fixtures.

Have you looked at the Historic Downtown Post Office lately?  I mean, really looked closely?

Up until recently, there were no exterior light fixtures at the North 4th Street entrance.  One lone fixture stood at the Centre Street entrance, after the second fixture was felled by over zealous visitors in search of a photo opportunity.

Despite requests and conversations with various USPS officials about securing replacements, success remained elusive until a couple of months ago when four new period light fixtures appeared as if by magic.  Did Santa Claus visit Fernandina Beach early?

Over the years many people have tried to find replacement lamps for the originals which did not stand the test of time, thanks to both their age and car accidents. The Amelia Island Fernandina Restoration Foundation, Fernandina Beach Preservation Planners, former Florida Senator Bill Nelson and current Representative John Rutherford were all involved in this quest  at one point or another during the recent past. 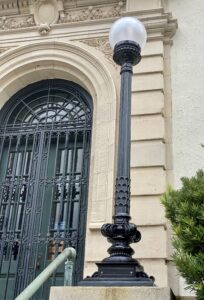 The most promising connection occurred when Adrienne Dessy Burke, then the City’s Preservation Planner, managed to find a receptive person at USPS headquarters who agreed to search for replacements from the USPS facility inventory.  He could not find exact replicas, but did find four period lamps, which all matched and were in good condition.  While that report gave our local preservation community hope, there was nothing concrete promised or delivered.

Burke, who worked for the City of Fernandina Beach starting in 2008 as a Planner and then as Director of the Community Development Department, left the City in 2018 to assume the position of Planning Director with Nassau County.  With her departure, efforts to secure replacement lamps for the Post Office went on the back burner.

And then, like magic, some time this summer the replacement lamps were delivered and installed.  We owe a debt of gratitude to those responsible, but we have not been able to identify them.  Normally, public officials like to claim credit for good deeds, but not apparently in this case.

So if you know more to this story or better yet can identify where we should send our expressions of gratitude, please email me at Suanne@FernandinaObserver.com.

WOW that’s great news. I did not notice, but I’ll check these out. Such a long time coming…..

Adrienne was a fabulous civil servant!! The Post Office is a treasure that we all need to protect. Thanks to all who are keeping this on the “front burner”!!

Excellent!! Thank you to all involved!! Adrienne contributed a lot to the City and County, and I’m certain the same excellence is being demonstrated in Miami.