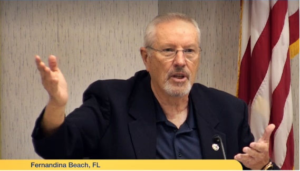 Mayor Mike Lednovich today filed for re-election to the City Commission Seat 4 position in the 2022 election.

“In 2018 I ran on a quality-of-life platform. For the past three years, I have kept my promises to limit growth, protect our natural environment, increase property placed in conservation and provide improved City services,” Lednovich said. “I also made the City Commission and City activities transparent to the public by publishing important documents on social media available to the public.”

Lednovich’s term as Mayor expires in December, 2022. As set by the City Charter, commissioners seeking re-election are prohibited from seeking the Mayor position.

“The 2022 City Commission election is crucial in maintaining the quality of life we all enjoy in our wonderful city. We are at a tipping point of over-development that threatens to push our infrastructure past its capacity to support such growth,” Lednovich said. “We are dangerously close to having a commission that will rubber-stamp new development in the City.”

The greatest threat to increased density in the City is developers seeking to have county property annexed into the city and having property rezoned for residential use, he said,”I’m adamantly opposed to rezoning land from commercial or industrial to residential use. Whatever parcels are currently zoned residential that’s fine. But we cannot afford to absorb more residential density in the city,” Lednovich said.

Among the actions Lednovich supported during his three years on the Commission are: