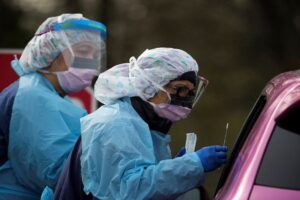 Florida is very close to a low point in weekly counts of new COVID-19 cases not seen since before the delta variant emerged but deaths from the summer surge continue to pile up in numbers rarely seen before the summer of 2021.

That total is in the range Florida was tabulating each week in late May, June, and the first report in July, back when Florida’s coronavirus crisis appeared to be over.

Then came Florida’s summer surge, fueled by the delta variant, which began emerging by July 9. By July 30 Florida was reporting more than 100,000 new cases each week. Those case numbers began falling again in late August.

Friday’s weekly report showed 1,192 more deaths were added to the state’s total in the previous week.

That was the 10th consecutive week that reports from the Florida Department of Health newly tallied COVID-19 deaths of more than 1,000 Floridians over seven-day periods.

Still, Friday’s addition of 1,192 deaths was the fifth straight week that’ Florida’s weekly number of new fatalities fell. The latest report also marked the first weekly total of additional COVID-19 fatalities since Aug. 13 that was not worse any week Florida had suffered prior to the summer surge of 2021.

Nationally, according to data compiled from state reports and released by the U.S. Centers for Disease Control and Prevention, Texas added more deaths in the past week than Florida.

The latest CDC data, appearing in the agency’s COVID-19 Community Profile Report, is a day behind Florida’s reporting period. So the most recent federal reports can only show a week of Thursday through Wednesday. Florida’s weekly state reports show data tabulated Fridays through Thursdays. But the federal reports allow for comparisons of states.

In the CDC’s latest report, through Wednesday, Texas reported 1,579 new COVID-19 deaths during the previous seven days. Florida was next with 1,304 new fatalities in the CDC tabulations, followed by California, 678; Georgia, 607; and Ohio, 531.

That latest CDC data shows that five states — Arkansas, West Virginia, Alabama, Idaho, and Wyoming — had higher per capita rates than Florida of newly-reported COVID-19 deaths for the most recent week. Arkansas’ newly-reported deaths amounted to 12.8 per 100,000 residents. Florida’s amounted to 6.1 deaths per 100,000 residents. Texas’ rate was 5.3; and California’s 1.7.

There is an error of omission in this article. The high death rate is attributed to the Delta variant, but more of its cause is by people not getting vaccinated.

Let’s do a little data analysis Mark. Frankly, if our health agencies had embraced the re-purposing of therapeutics like Ivermectin and HcQ early in the pandemic when doctors who actually treated patients were using them with success, this pandemic would have ended by mid-2020. Doctors who used protocols that included IVM and HcQ wrote letters to the FDA and NIH that went unanswered and were ignored. So, let’s first do a safety profile comparison between the vaccines, Remdesivir, and IVM, followed by the experience the state of Uttar Pradesh in India had after an aggressive campaign to distribut Covid kits that contained among other things, Ivermectin.

Per the WHO database VigiAccess, which collects adverse effects data on medications used around the world, there have been 7,491 adverse drug reactions for Remdesivir thru October 13, 2021 since the drug was introduced in 2020, more than ivermectin has registered over the last 30 years.  What’s more, serious adverse reactions from remdesivir are reported in high numbers. For example, in less than two years, those who have used remdesivir have reported over 560 deaths, 550 serious cardiac disorders (such as bradycardia and cardiac arrest), and 475 acute kidney injuries.

For Ivermectin, per VigiAccess there have been 5,674 adverse drug reactions since 1992 with what is now over 4 billion doses administered. Those reactions have been mild and transient. The largest reported categories for ivermectin include skin issues, headaches, dizziness, and gastrointestinal disturbances such as diarrhea and nausea. The NIH confirms that ivermectin’s primary adverse side effects “include dizziness, pruritis [itchy skin], nausea, or diarrhea. And a recent review of ivermectin similarly describes the common side effects as “itching, rash, swollen lymph nodes, joint pain[], fever, and headache. Source the Nebraska AG report re: Ivermectin

Yet it is Ivermectin that is being smeared and demonized as dangerous. Pharmacies are refusing to fill legitimate prescriptions from doctors and hospitals are refusing treatments using it while Remdesivir – which costs in excess of $3000 per 5 part treatment – is being used as part of the standard of care. Ivermectin costs maybe a dollar per 3mg pill. A five day treatment using Ivermectin might cost $100, probably less.

As for India, this is another story that is not being told. Uttar Pradesh is the largest state in India with a population of over 200 million – roughly 2/3 the size of the US. They launched an aggressive campaign to distribute covid kits in an attempt to stem the growth in cases due to the delta variant. Among other things, the kits included Ivermectin. April 26 appears to be the peak at over 35,000 cases per day. By July 1 , the case count had dropped to 156 – that is not a typo. Their vaccination rate at the time was under 5%. As of October 19, the number of active cases stands at 119, with 8 new cases, and the vaccination rate stands at 11.62% for fully vaccinated individuals. UP is not the only state that experienced similar results after wide distribution of Ivermectin – Delhi, Goa, Karnataka, and Uttarakhand also saw dramatic reductions in cases, hospitalizations, and mortality. But, you will not see this reported in the MSM, and in fact, the WHO pressured the Indian Government to remove Ivermectin from it’s treatment protocol. Fortunately, individual states are free to develop and administer their own protocols. Unlike UP, Kerala restricted the use of Ivermectin in April and abandoned it altogether in August in favor of vaccines. It is a tiny state compared to UP, yet as of Oct. 19, have over 6676 new cases and over 88186 active cases. Using this link, it is clear to see what states use Ivermectin, and which do not. Above the main chart is a drop down labeled “ALL INDIA” where you can pull up the stats of each state in India. It is quite revealing.  Source: timesofindia dot indiatimes dot com/ coronavirus. As well as thedesertreview dot com – just search on Ivermectin in India, and search trialsitenews.

In my opinion, there is truly something very sinister and evil going on and I hope there will be a price to pay. Had the repurposing of IVM and HcQ been embraced early on when doctors were finding that both were effective when used early in treatment, this pandemic would be well under control – just as the state of Uttar Pradesh has found. Doctors developed treatment protocols using among other things like Vitamins C and D, Zinc, Quercetin along with either IVM or HcQ as early as April 2020. Those doctors wrote letters to the NIH and FDA alerting them to the apparent effectiveness of these protocols, but were ignored. Once Trump touted HcQ, a full on smear campaign was launched against it – likely funded by big pharma given what they stood to gain by developing the vaccines. If therapeutics like IVM and HcQ proved to be effective, there would be no need for vaccines.

I would like a public explanation to why my response to Mark Tomes was censored. I provided details and facts along with sources, yet my comment was not published.