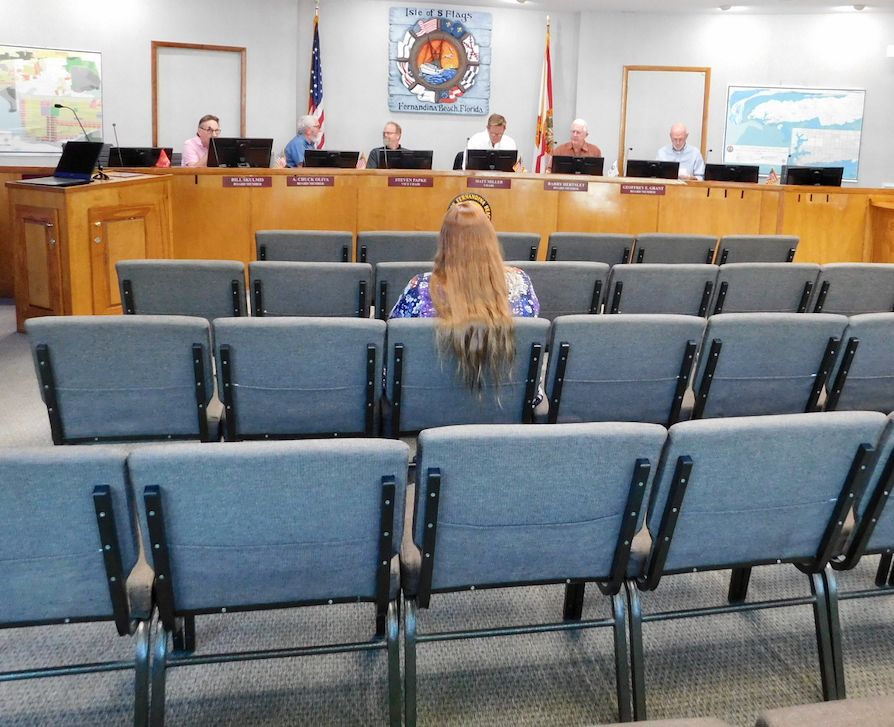 Following four hours of intensive and often technical testimony and debate, the Fernandina Beach Board of Adjustment (BOA) voted 4-1 to deny the Centre Street Restaurant Group’s (CSRG) appeal of the City Engineer’s notice to condemn the building housing Brett’s Waterway Cafe on the grounds that the building is an unsafe structure.

The CSRG has 15 days to appeal the BOA ruling to Circuit Court.  The CSRG has 32 days remaining of the initial notice period during which the building may remain open to the public.  Should an appeal be filed with the Circuit Court, the appellate judge will decide whether the building may remain open during the appeal period until a final decision is rendered.

The mood in the chamber was grim as all parties agreed that public safety was paramount.  They also agreed that the structure was near the end of its life.  All parties also expressed their respect and appreciation for Brett Carter’s restaurant operation.  One of the factors making the BOA’s decision even more difficult was the realization that 70-80 restaurant workers would lose their jobs with the restaurant’s closure.

CSRG has 4 years remaining on its lease for the property.  City Manager Dale Martin has already advised them that the lease will not be subject to renewal.

On July 2, 2021, City Engineer Charles George officially notified the CSRG that he had declared the restaurant building unsafe pursuant to Chapter 22, Section 26 of the City of Fernandina Beach Code of Ordinances.  George noted,”Visual observations indicate numerous deficiencies observed:  active collapse of a concrete double-tee substructure member. … Staff believes the substructure at Brett’s Waterway Cafe has surpassed its useful life and could suffer significant damage during a hurricane or other high wind event.  Due to the elevated risk of substructure failure, collateral damage and repairs necessary, City staff believes that the deteriorating structure condition is a potential life safety risk to the public to continue to occupy this structure.”

Three speakers appeared at the appeal on behalf of the CSRG:  Jacksonville attorney John Tucker, leaseholder Bryan Simpson, and structural engineer Mark Keister.  Tucker said they were aligned with the City on the need for public safety, but he asked if there would be a way the parties could work together to get through the last 4 years on the lease.

Pointing to the numerous reports questioning the soundness of the restaurant underpinnings over the years, CSRG’s argument seemed to hinge on whether the structural problems posed an imminent threat to public safety or whether they merely identified a potential to become unsafe.  Their position was that the building was not unsafe at this time.  They argued for more testing and monitoring at intervals of 4-6 months.

The building dates to 1987; Brett’s restaurant opened the following year.  It was constructed on top of the platform for the old welcome center, which was built in 1962.  Much discussion centered upon the soundness of both the 1962 platform and the second platform added in 1987.  Engineer Mark Keister said that the newer portion was “pristine” and the bottom portion was in poor condition, adding that the lower portion was not connected to the upper portion.  In reference to the multiple cracks in the concrete identified through various reports, he advocated additional testing to determine if the cracks went all the way through the structures.

Keister said that what needed additional investigation was the state of the rebar reinforcement inside the concrete beams and pilings.  The only way to conduct such testing was through destructive testing, which would involve removal of sections of concrete to evaluate the corrosion of the rebar.  Corroding rebar would eventually lead to spalling and delamination of the concrete, undermining the structural soundness of the building.

Delamination is a separation along a plane parallel to a surface, as in the case of a concrete slab, a horizontal splitting, cracking, or separation near the upper surface. Spalling is a term used to describe areas of concrete which have cracked and delaminated from the substrate.

CSRG asked the BOA to delay ruling until such testing could be conducted, probably by the next BOA meeting on November 17, 2021.

In speaking for the City, Engineer Charles George explained that the corrosion was caused by the wet/dry cycles of tides and salt intrusion.  He cited the problems of attempting repair due to the small work space limited further by having to adjust to tide flows.  He said that the top caps were deteriorating and expressed concern that destructive testing could further weaken an already impaired structure.

George agreed that additional testing a recent as July 2021, presented findings to back up the poor state of the existing structure.  He said that engineers will present findings but refrain from outright declaring that a structure is unsafe.

BOA members wrestled with the question at what point does a compromised structure become unsafe.  Member Chuck Oliva said, “The City has been studying the problems with this structure since 1999, and all we have is a big handful of reports.”  Member Geoffrey Grant, an engineer, said that additional testing would just lead to more data, not necessarily an action plan.  He faulted both the City and CSRG for a failure to maintain the structure over the years.  Member Steven Papke, an architect, asked probing questions about the condition of the restaurant underpinnings.

Alternate Member Bill Skulmis asked if there was any value to additional testing, since there are only 4 more years left on a lease that will not be renewed.  He suggested that the costs of any needed repairs could not be recouped by the lessee over such a short period.

BOA members were uncomfortable approving any extension of time without a plan to make the building safe.  When CSRG indicated a willingness to develop a plan with more time, BOA Chair Matthew Miller reminded them that they had already had 3 months since their notice to develop a plan.  He said the BOA had hoped to see one presented at the current appeal hearing.

Chair Miller spoke for the BOA when he expressed an overriding concern for public safety as engineers and others tried to determine the factors differentiating “safe” vs. “unsafe” for a public building that all parties agreed was approaching the end of its life.

BOA members reluctantly concluded that in the interest of public safety, they would deny the appeal.  Only member Barry Hertslet disagreed, apparently willing to give the appellant another month for more tests.

Correspondence and reports connected with this case may be found on the City’s website under BOA Agendas.  http://www.fbfl.us/867/Agendas

The City and CSRG could negotiate an addendum to the lease where, in return for remaining open or the next four years, CSRG releases the City from all liability and clean up costs in case the structure collapses. Property and/or liability insurance limits would also be increased. Of course, no legal document is 100% iron clad.