Florida braces for the return of a seasonal species: The Canadian snowbird 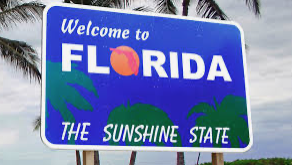 That decision was expected momentarily from the White House at the time, but the surging delta variant derailed reopening plans until this week.

On Wednesday, the U.S. Department of Homeland Security (DHS) announced it will reopen the nation’s land borders to “nonessential travel” by the fully vaccinated beginning Nov. 1, ending a 19-month pandemic-induced freeze.

Under the new rules, travelers entering the U.S. by vehicle, rail and ferry will be queried about vaccination status by U.S. Customs & Border Protection officers, who will have discretion to request that any presented proof of vaccination be verified in a secondary screening process.

While the Nov. 1 U.S.-Canada border reopening will enhance Canadian tourism in Florida, it will also lead tough hopeful return of what had become a suddenly rare winter species in the Sunshine State: the Canada snowbird.

About 1 million Canadians spend up to six months wintering in Florida each year, contributing an estimated $6.5 billion to the state’s economy.

But with the border closed since March 2020 to “non-essential” traffic, essentially banning people from crossing in personal vehicles, many Canadian “snowbirds” never made it to Florida last year

Some Canadians flew south and wintered without their cars or had them shipped via train. The cost of flying and having cars shipped — between $2,000 and $2,500 — kept many in the provinces for the winter.

According to a survey conducted by Snowbird Advisor, only about 30% of Canadian seasonal visitors were able to winter in Florida last year but more than 90% said they wanted to this year.

“The sentiment is that they’re not going to spend another winter in Canada,” he said.

Air Canada spokesperson Peter Fitzpatrick told the Canadian Broadcast Company (CBC) said there’s “strong demand” for travel to U.S. destinations — including to Florida — “with many of these markets on pace with 2019 levels.”

While Canadian “snow birds” make up a significant component of the state’s seasonal economy, tourists — short-term visitors — from Canada are also a bedrock constituency of the state’s tourism economy.

In Florida, Canadians make up a significant part of the tourism-dependent economy. More than 3.6 million Canadians made short-term visits to the state in 2019.

Although trucks and other commercial vehicles were allowed to cross the border as “essential travel,” the Nov. 1 reopening should also grease the trade-rails between Florida and Canada.

According to a 48-page 2018 Canada-Florida Economic Impact Study produced by Canada’s Miami consulate, “Canada is Florida’s most important economic partner” with $7 billion in goods annually traded between the state and the nation.

Those numbers are similar to figures in Enterprise Florida’s Florida-Canada 2015-17 trade profile, which states that in 2017, “Florida and Canada enjoyed more than $7 billion in trade, which supported about 600,000 jobs in the state.