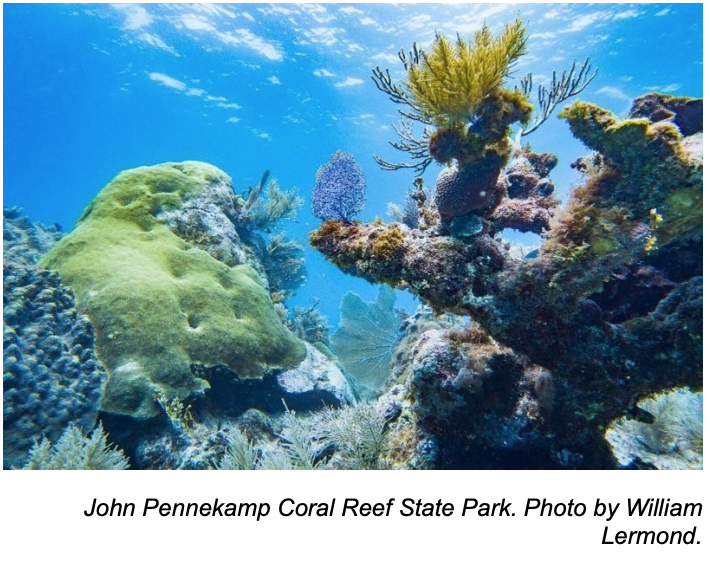 Sure, you’ve heard of Australia’s Great Barrier Reef, but have you heard of Florida’s coral reef?

It’s big, it’s beautiful, it’s one of the many things that makes Florida special. But despite its grandeur and vital importance, many don’t realize that just off Florida’s coast is the only living barrier reef in the continental U.S.

This natural wonder stretches more than 350 miles from the Dry Tortugas to Martin County. To put that in perspective, that’s like driving from Miami to Jacksonville.

Why is this important? Because Florida’s coral reef not only acts as a buffer to the coastline when storms hit, it is the crown jewel of Florida’s coastal resources, providing shelter, food and breeding sites for many of your favorite marine species. Black grouper anyone? 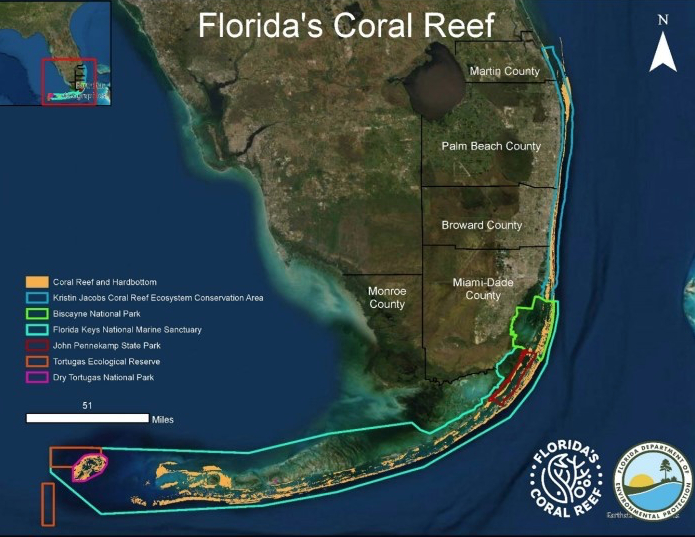 But in case you’ve missed it in the news, Florida’s coral reef has been suffering from a hard-to-beat illness.

Nearly half of Florida’s 45 stony coral species are impacted by this disease, including major reef-building corals like boulder and brain corals. 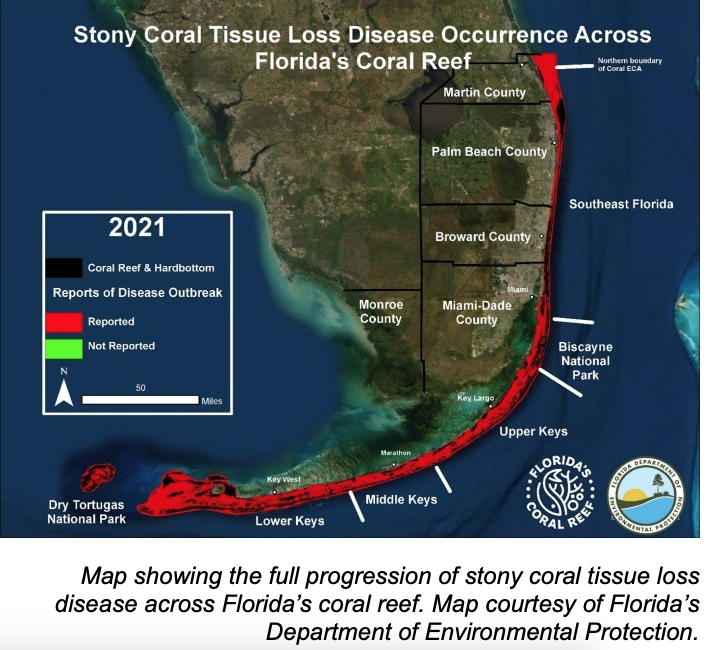 While coral diseases are common, similar to colds in humans, this disease event is unique due to its large geographic range, long duration, rapid spread through the entire reef, high rates of mortality and the large number of species affected.

Florida Fish and Wildlife Conservation Commission (FWC) biologist John Hunt, who has been studying and diving Florida’s coral reef for 40 years, recalls the beauty that once was, and the devastation that he sees today.

“When I arrived in the Florida Keys in 1981 from North Carolina, Florida’s offshore coral reefs were filled with large branching corals so big that you’d sometimes have to go around them when snorkeling. They were very colorful, vibrant and filled with fish and corals,” said Hunt. “Today, 40 years later, those vertical coral structures are gone, and the vibrant colors of the reef have become dull. I swim over them, and that level of excitement and anticipation I used to feel is just a little bit less.” 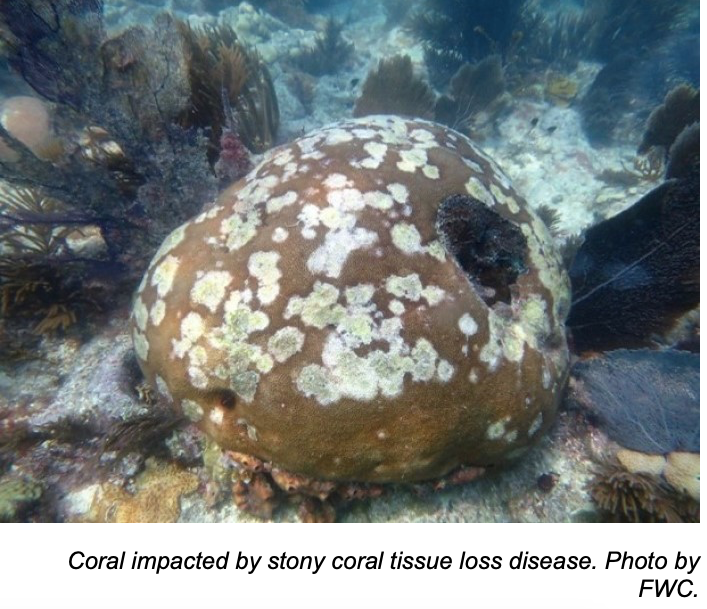 OK, if like me, you are starting to worry, take a deep breath and know that the FWC, along with the Florida Department of Environmental Protection, NOAA, and the National Park Service, are working with over 60 partners from federal, state and local agencies, non-governmental organizations, universities, and members of the community to investigate the disease and save Florida’s corals.

“I don’t think there’s a project we are working on that is any more important,” said FWC Commissioner Robert Spottswood at a recent Commission meeting regarding our coral work.

We have rescued healthy corals before they were impacted by the disease and we are now rescuing corals that survived the disease, moving them to zoos and aquariums for safekeeping. We are testing treatments that could help prevent the further spread of the disease, monitoring and researching why this is happening and what is causing it, growing new offspring of rescued coral (called propagation) and, when the baby corals are big enough, working with partners to outplant them back on the reef.

It’s been a herculean effort and we can’t do this alone. We need your help anglers, spearfishers, divers and snorkelers, lobster-lovers and beachgoers.

You can start by visiting MyFWC.com/CoralDisease, learning as much as you can about Florida’s Coral Reef and the disease and by finding ways to get involved, such as joining Florida’s Coral Crew.

Here are a few other things you also can do to help:Avoid touching corals while diving.

“My hope is the restoration activities that we are all embarking on will restore that structure and vibrancy,” said Hunt.

Saving Florida’s corals isn’t just about stopping the disease, it’s about creating a healthy coral reef that can better withstand the disease and other impacting factors. Because healthy habitats equals more fish and, let’s face it, we all want more fish.

Coral reefs occupy less than 1% of the world’s oceans, but it is estimated that approximately 25 percent of marine fish species inhabit coral reefs during some part of their lives.

Have a question about marine fisheries regulations, improving recreational data, catch and release or more? We are here for you. Send your questions, photos and fishing tales to Saltwater@MyFWC.com. Make sure your photo meets our photo requirements by visiting MyFWC.com/Marine and clicking on “Submit a Photograph.” Learn how to submit your catches and get rewarded through our Saltwater Angler Recognition Programs at CatchaFloridaMemory.com.

The quarterly Gone Coastal column is one of many ways that the Florida Fish and Wildlife Conservation Commission (FWC) Division of Marine Fisheries Management is helping recreational anglers understand complex saltwater regulations and learn more about saltwater fishing opportunities and issues in Florida. We are also available to answer questions by phone or email anytime, and we would love the opportunity to share information through in-person presentations with recreational or commercial fishing organizations. To contact the FWC’s Regulatory Outreach subsection, call 850-487-0554 or email Saltwater@MyFWC.com.

Thanks for sharing this informative and necessary article. Not mentioned regarding what to do to protect and bring back our beautiful coral reefs is to support local and state legislators that are conservation-minded. Along the same lines, it is important to repeal the state preemptive laws that have prohibited local municipalities from enacting rules and regulations that can protect our reefs, such as prohibiting sunscreens that contain chemicals that are harmful to coral reefs.

That is a good point about the sunscreens – everyone knows how strong the FL sunshine is. I was very lucky and was able to grab a bunch (maybe 6 or so) sunscreens on clearance when I was traveling recently. $1.99/bottle for really high quality stuff! You do have to pay attention to the ingredients in the sunscreens.