The University of Florida keeps climbing.

A decade ago, UF was on the inside edge of the Top-20 in U.S. News and World Report’s public university rankings, but it has experienced a rapid ascent in the years since.

When UF President Kent Fuchs arrived in Gainesville in 2015, the goal was to bring the state’s flagship university into the top-10. It made the cut in 2017, tying at No. 9 with a couple of University of California system schools. 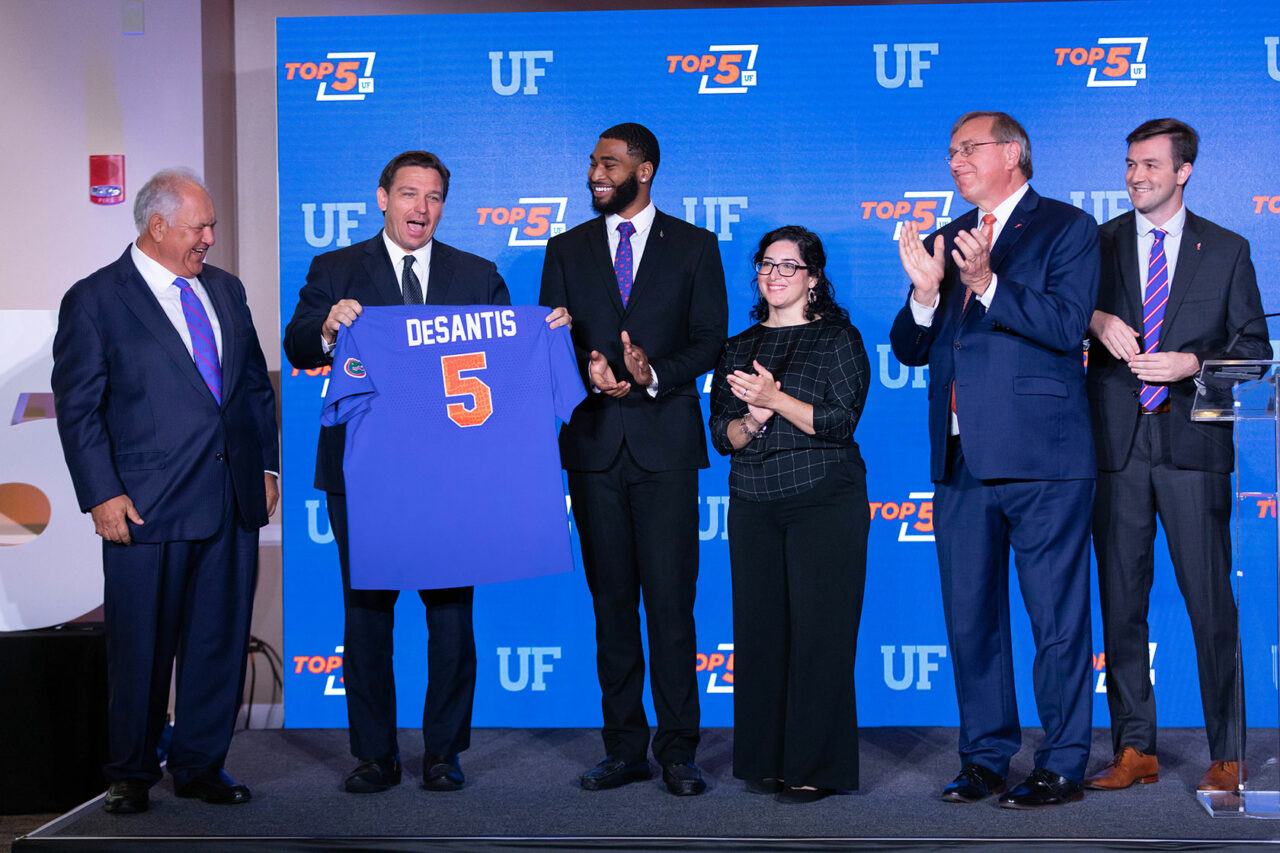 The University of Florida revels in its new elite status. Image via UF.

Now, U.S. News and World Report ranks UF as the No. 5 public university in the country tied with the University of North Carolina Chapel Hill and one spot beneath the University of Virginia. Both schools broke ground on their campuses in the 18th century and have long been considered the elite public institutions on the East Coast.

That UF — which didn’t exist in its current form until 1909 — would be considered an equal to either was a pipe dream just a handful of years ago.

The university has also rocketed up the overall charts, moving from No. 50 to No. 28 on the overall list, which includes the Ivy League and other vaunted universities.

Several factors contributed to the university’s rise in the rankings, including strong and consistent support from the Governor, Legislature, Florida Congressional Delegation and the State University System Board of Governors. All shared in the celebration when the rankings were announced Monday.

“When we look back over the past 20 years, we’ve seen a steady improvement. In 2012, the University of Florida was ranked No. 19, and now, they are ranked five. There’s a lot of great students, administrators, the Florida legislature, and board members that have continued to make Florida the best place in the nation to get a great education,” Gov. Ron DeSantis said.

Both DeSantis and Florida Board of Governors Chair Syd Kitson emphasized that UF’s ranking was an accomplishment for the state as much as the university.

“UF’s commitment to excellence and continuous improvement has motivated and inspired all 12 of Florida’s public universities to strive for their very best,” Kitson said. “UF’s accomplishments elevate the entire State University System, which in turn elevate the state of Florida.”

The university says its climb will continue. It’s well on its way to generating $1 billion in research expenditures annually — it hit $942 million last year — and it has hired more than 500 full-time faculty in the past two years.

“I want to express my gratitude and acknowledgment to all of the people in the UF community who contribute every day to a culture of hard work, passion, invention and discovery that will far outlast this ranking season and any other accolades,” Fuchs said. “It’s an honor for UF to be recognized, and it’s a pleasure to say with full confidence that our momentum will continue.”

— “UF moves up, is Florida’s top college on U.S. News rankings again” via Annie Martin of the Orlando Sentinel

FSU holds on to top-20 ranking — Florida State University was once among the top-20 public universities in the U.S. News & World Report rankings, holding onto its No. 19 spot. In the overall rankings, which include private schools, the university inched up to No. 55. Like UF, Florida State’s rise in the rankings has been swift. Just five years ago, FSU was ranked No. 43 on the public schools’ list. An upswing in FSU’s six-year graduation rate (84%) and freshman retention rate (93%) since 2016 has helped the university move up 24 spots. “It is absolutely great news,” Sally McRorie, provost and executive vice president for academic affairs, said of the rankings. “It means that we’re doing the right kind of things to help our students succeed.”

“FAMU repeats as nation’s highest-ranked HBCU by U.S. News & World Report” via Byron Dobson of the Tallahassee Democrat — Florida A&M University moved up 13 slots — from 117 to 104 — among the nation’s top national public universities. Last year, FAMU tied for seventh with North Carolina A&T University in the Top 10 HBCU category. North Carolina A&T, based in Greensboro, placed eighth this year. “Moving up 13 places is a testament to our focus on student success and the dedication of our faculty, staff, and students to the tenets of our strategic plan, FAMU Rising,” FAMU President Larry Robinsonsaid. The university is hosting a celebration of its rankings during a public event at 6 p.m. Wednesday in front of Lee Hall, with the Marching 100 performing.

Keiser University gets a nod in U.S. News rankings — Keiser University also cheered the U.S. News and World Report rankings on Monday, touting its recognition as a top-5 university in social mobility. The rankings category recognizes universities that enroll and graduate large proportions of disadvantaged students awarded with Pell Grants. “We are very pleased to earn such high marks in social mobility for a third year in a row,” said Arthur Keiser, Ph.D., Chancellor of Keiser University. “Keiser University is dedicated to providing access and opportunity to a diverse population of students, and we’re pleased to include this goal in our commitment to student success.” In 2020, Keiser took the No. 34 overall spot in the category and moved to No. 11 last year.