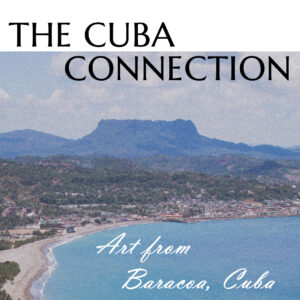 On September 17, a unique exhibit opens at the Museum of History. Thirty-seven works from 21 Cuban artists will be displayed until November 30. The land and its history clearly inform the works of art we’ll see. The artists are from Baracoa, on the eastern tip of Cuba in Oriente province. It’s an area of small villages with Guantanamo Bay and the U.S. encampment nearby.

This part of Cuba has been historically poor and generally ignored by the government. It is in a wide bay with El Yunque, a table mountain guarding one end of the bay. The area has been given a UNESCO Humboldt Park Preserve status because of the variety and scope of the flora and fauna it holds. This has provided some tourist trade for the local peoples in recent years.

According to Berta Arias, the Cuban artists come from various backgrounds. Some have been artists their whole lives. Some longed to be artists but the Cuban government had other plans for them. Some turned to art to expand their lives and provide a sort of relief from poverty and constraints. Their works will be on display here as part of the Festival of Santa Maria, celebrating the ties between our area and Cuba.

Having looked at a few pictures that will be exhibited, the artworks seem to fall into three categories. Sculpture is represented in stylized figures made out of peridot, clay, wood, or chalk. These pieces look as though they could have been made a thousand years ago.

Abstract art is represented in arresting ways. Imagine a painting full of partial faces with wide eyes. The images evoke thoughts of sadness, confinement, and loss.

Some paintings clearly reflect the island’s Caribbean traditions. The Taino, a native people who occupied the land before the Spaniards, are reflected in figures we would associate with ancient native legends. These paintings tell stories about the actions and beliefs of the earlier peoples.

Berta Arias worked with the artists and the museum to bring these works for exhibit. Because the artworks could not be sent out of Cuba, she arranged for the artists’ pieces to be photographed. Photos were then sent for enlargement and printing as posters. We will see 37 unique pieces in the exhibit. On September 17, she will present a lecture on the background of these artists and their works. Berta has arranged for four local artists to judge the works. Six awards will be given out. These posters will be auctioned off and 60% of the proceeds sent to the Baracoa artists.