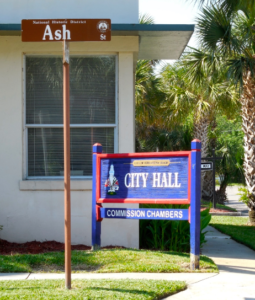 The Fernandina Beach City Commission (FBCC) took another crack at whittling down the FY 21/22 budget at a second budget workshop held on August 24, 2021.  This time they succeeded with the input of City staff.  The next step in adopting a new budget will be the First Public Hearing on the Budget, which will take place at City Hall on 5:05 p.m. on September 7, 2021.

Commissioners left the first budget workshop on August 4 generally confident that they had resolved budget shortfalls by reprogramming expenses from the City’s general fund to impact fees, despite Commissioner Chip Ross’ claim that such programming was not a proper use of impact fees.  Vice Mayor Len Kreger also sounded cautions on using impact fees too broadly.

Impact fees are a one-time fee assessed to either developers or builders for new homes, including townhouses, apartments and condominiums, as well as new commercial developments. The purpose is to help pay for increased infrastructure demands created by the new growth.

Mayor Mike Lednovich had been the driving force behind the decision to use impact fees to pay for such things as repointing the bricks at the Peck Center and replacing the roof on the Atlantic Avenue Recreation Center.  Ross, who read from the law, disagreed.  City Attorney Bach said that whereas use of impact fees had been loosely proscribed in the past, the Florida Legislature passed new legislation this past session clarifying how impact fees might be used:  to add infrastructure to support growth, not to repair and maintain existing infrastructure.

Despite misgivings on the part of some Commissioners and City staff, the FBCC cancelled its second budget workshop scheduled for August 10, in the mistaken belief that budget matters had been reconciled.

Following that meeting much time and effort were devoted to clearing up the impact fee controversy.  With a better understanding of how impact fees may be legally and properly used, Mayor Lednovich rescheduled the second budget workshop to find other ways to reconcile the $450K gap caused by the FBCC’s decision to adopt the adjusted rollback rate as opposed to reauthorizing the millage approved for the FY 2020/21 budget.

Following public input from four individuals, Commissioners turned their attention to their need to cut $450K from the budget.  The FBCC agreed to cut $50,000 from the Parks and Recreation Budget proposed for Buccaneer Field fencing and $250,000 in administrative impact fee funds that had been proposed to design a new City Hall.  Commissioners also cut $25,000 from the streets paving program.

Lednovich acknowledged that using impact fees to repoint bricks at the Peck Center and to replace the roof at the Atlantic Recreation Center was “probably a bridge too far.” At the request of the Mayor, City Attorney Tammi Bach read a list of items requested by the Parks and Recreation Department in the coming budget and explained that these items were replacements of existing equipment (water fountains, water pump, A/C unit, etc.) and could not be funded with impact fees.  “Replacing something that has just gotten old is not necessitated by growth,” Bach said.

By agreeing to cuts and reprogramming allowable expenditures to impact fees, Commissioners cut $11,000 more than needed to produce a balanced budget.

Once again, Commissioner Ross attempted to get other commissioners to set an example by agreeing to reduce their salaries by ten percent.  Ross at earlier budget meetings has questioned the propriety of City Commissioners obtaining health insurance through the City when other part time staff are not eligible to do so.

An obviously exasperated Mayor said, “This has been brought up twice and it is insulting.  I don’t want to go there; I don’t want to play that game.  Gentlemen, if you want to have this discussion, I won’t cut you off.  We have just balanced the budget, and personally I don’t think we need to discuss this.”  No other Commissioner seemed to want to discuss this suggestion either.

Commissioner Bradley Bean thanked City Staff for going over the budget once again to identify areas where cuts could be made.

Love the nuances of budget terminology. The “adjusted rollback rate” represents an additional 4.3% increase over the TRUE rollback rate. Certainly better than the 7.2% increase originally proposed.

Golf course revenues appear to be very, very, very optimistic – especially TopTracer with $5,000/month bay rental and $4,000 month in F&B when those items were $2,400 and $342 respectively in August. And I didn’t see the $2,400/monthly software lease fee recorded in the expense detail of the July financials. I’m sure its there somewhere.

Don’t forget the missing labor costs associated with Toptracer. Apparently the facility is automated and runs itself. Even if you don’t have dedicated Toptracer staff, a first year accounting student would be able to “apportion” labor, utilities, etc among the various golf course sub-accounts.

Revenues seem easy to project, while expenses are assigned to other golf course operations.

Yes, Dave. On a related front, the old saying “a fee by any other name is a tax”. I also believe Martin’s revenue forecasting accuracy is suspect, except knowing how much RE tax to expect based on millage/value. TopTracer is exhibit #1. Our commission is guilty of governing malpractice. Before they float a GO bond of $25+ million they need to dig into the city’s spending and assure taxpayers that all unneeded costs are cut.

Surely there must be some architects out there with a +/-50,000 square foot office building already in their portfolio. How much would it take to customize an existing building design to our needs?

Unless, of course, they’re still holding on to the delusion of remodeling the old Post Office into some kind of 21st century money pit / Taj Mahal.

Nah. That could never happen.