With census data in hand, Florida lawmakers to begin redistricting process in fall 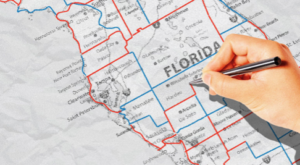 The Florida Legislature is set to begin its decennial redistricting process, most likely in September, after the long-awaited release of 2020 U.S. Census Bureau state and county population breakdowns.

The newly-posted census population and ethnicity data will be used to redraw 429 U.S. House districts in 44 states and 7,383 state legislative districts nationwide.

The data will be used by the Florida Senate’s Reapportionment Committee to reconfigure its 40 Senate districts, and the Florida House Legislative Redistricting Committee will do the same with its 120 House districts.

Where the Republican-controlled Legislature will create that new congressional district and how it will be carved from 27 existing districts will be closely watched during the process this fall.

The new district and reapportioned state legislative districts will be approved by lawmakers during the 2022 session as a regular bill, but one in which the governor cannot veto.

The Florida Constitution prohibits drawing districts “to favor a political party,” and Florida voters overwhelmingly approved two fair districts amendments in 2010 that, among other guidelines, require review to ensure incumbents are not protected by the process.

As the dominant party, however, Republican lawmakers will control the process.

Sprowls and Simpson announced Thursday in a series of memos the Legislature will create a website for the public to view proposed maps, create maps of their own and submit input, but much remains uncertain how the committees will proceed when they convene in the fall.

Both cautioned lawmakers to refrain from discussing the redistricting process when not in committee to mitigate the potential for lawsuits.

“Situations where you comment on your personal preferences or ambitions for a given district, give your opinion regarding an incumbent, or even making satirical remarks should be avoided,” Sprowls wrote.

“As we move forward,” Simpson wrote, “Senators should take care to insulate themselves from interests that may intentionally or unintentionally attempt to inappropriately influence the redistricting process.”

Rodrigues called for patience, noting it is going to take time to sift through the massive data produced in “legacy formats” by the census.

“This data will be raw and unformatted. The official Census data will be released next month in September,” Rodrigues said. “However, we can take the raw, unformatted data and look at the process for formatting it ourselves.”

Rodrigues said he attended an American Legislative Exchange Council (ALEC) conference in Salt Lake City last month where he learned more than 2,400 lawsuits were filed after the 2010 census that challenged revised district configurations.