The Florida Fish and Wildlife Conservation Commission (FWC) has introduced a video outlining new rules to protect Florida deer populations by reducing the risk of chronic wasting disease or CWD from spreading into the state. CWD, which has not been detected in Florida, is a contagious disease of the brain and central nervous system that is always fatal to members of the deer family.

The new 3.5-minute video uses animation to create awareness for hunters who have harvested deer, elk, moose, caribou and other members of the deer family out of state about what they can and cannot bring back to Florida. Production of this video was funded by a grant from Wildlife Alert, a nonprofit reward program created to encourage citizens to report wildlife violations.

“Wildlife Alert fully supports the FWC’s efforts to stop CWD from entering into Florida’s deer herd,” said Virginia Brock, chair of Wildlife Alert board of directors. “If CWD enters Florida, it will have serious impacts on our native deer forever.” 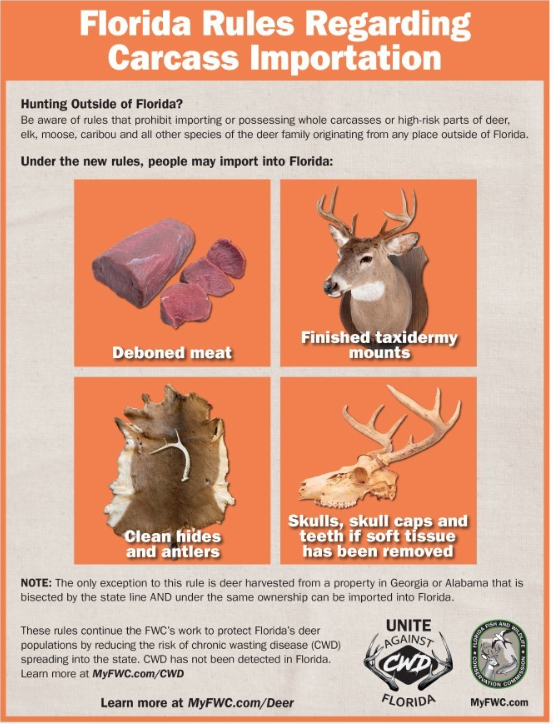 In addition, a Fish & Wildlife Foundation of Florida grant is generously supporting the distribution of information about CWD and the new rules. Funds for the grant came from the sale of the Foundation’s specialty license plate, which portrays the image of a deer. For each “deer tag” purchased, $25 goes to managing lands open to public hunting, hunting safety programs, and training in archery and other shooting sports.

“We are committed to supporting the FWC’s ongoing efforts to reduce the risk of chronic wasting disease spreading into Florida,” said Fish & Wildlife Foundation of Florida President and CEO Andrew Walker. “Providing this rule change information to those hunting deer, elk, moose or caribou outside of Florida is a critical next step. We’re thrilled to help protect our state’s deer population from one of the most serious wildlife diseases facing our country today.”

Effective July 2021, people are prohibited from importing or possessing whole rcasses or high-risk parts of all members of the deer family that originate from anywhere outside of Florida.

Under these rules, people may import into Florida:

The only exception to this rule is deer harvested from a property in Georgia or Alabama may be imported into Florida if the property is bisected by the Florida state line and is under the same ownership. Learn more about the new rules to protect Florida deer populations from CWD and view the new video by visiting MyFWC.com/Deer and clicking on “New Carcass Importation Rules.”

CWD has been detected in 26 states and three Canadian provinces. Transporting deer, elk, moose and caribou carcasses with CWD is believed to be one of the primary ways the disease is spread over long distances. Learn more at MyFWC.com/CWD.

About the Fish & Wildlife Foundation of Florida

The Fish & Wildlife Foundation of Florida is a nonprofit organization dedicated to supporting the FWC, and other public and private partners to conserve Florida’s native animals and plants, and the lands and waters they need to survive. Since its founding in 1994, the Foundation has raised and donated $50 million to conservation and outdoor recreation and education. More information can be found at WildlifeFlorida.org.

Wildlife Alert is a nonprofit program that provides financial rewards to concerned citizens when their information leads to citations or arrests for violations related to hunting, fishing or boating in Florida. Suspected fish, wildlife or boating law violations can be reported anonymously to the FWC’s Wildlife Alert Reward Program by calling 888-404-FWCC (3922) or reporting violations online.