Update: Click here for latest article by Adam Kaufman. Judge Fahlgren disqualifies himself after Ragucci makes claim that Fahlgren is “biased and prejudiced” 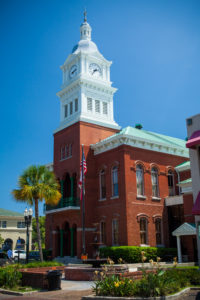 On August 6, 2021, Circuit Court Judge Steven M. Fahlgren, after an examination of documents Nassau Terminals CEO Christopher Ragucci claimed to contain “trade secrets,” ruled that those documents could be released to “Chip” Ross. Ross initiated a Public Records request for Port of Fernandina documents and filed for a Writ of Mandamus on June 8, 2021 when records were not provided to him pursuant to the Public Records Act.

On Saturday, August 7, Fahlgren’s judicial assistant provided a copy of the contested documents to Ross.

On Tuesday, August 10, Ragucci, by his attorney, filed a Motion to disqualify Fahlgren. A hearing before Fahlgren to determine whether sanctions will be imposed upon Raggucci and Nassau Terminals for civil or indirect criminal contempt is scheduled for August 27, 2021.

The Motion recounts Fahlgren’s rulings during the hearings in this proceeding and his decision process with regard to the documents alleged to be “trade secrets.” It alleges their release is “causing irreparable harm.”

The Motion notes that Ross corresponded with the Court on August 8, concerning the production of documents. The Motion states: “Given the Court’s reticence to curb Petitioner’s quixotic pursuit of any documents he deems unilaterally ‘relevant’ to his initial requests, Nassau Terminal has more than a reasonable doubt that they will continue to be subject to rulings in this matter which are inherently prejudiced against them and in contravention of their statutory rights.”

Ragucci’s attorney argues that “there is a well-grounded and objectively reasonable fear [Nassau Terminals] will not receive a fair and reasonable trial.”

The Ocean Highway and Port Authority (OHPA) will hold its regular monthly meeting this evening, August 11, 2021 at 6:00 p.m. at the James S. Page Government Center,  96136 Nassau Place,  Yulee, FL.  The law suit is not specifically listed on the agenda, but it may be addressed under one of the more general items.

Note that all recorded case filings are available on the Nassau Clerk’s website by searching under court records for Civil (CA) Case 164.

“…the Court’s reticence to curb Petitioner’s quixotic pursuit of any documents…” ?

It appears that Nassau Terminals’ attorney forgot that the Florida Sunshine Law permits any person to request a copy of most any public record they desire to review. No reason need be given for the records request. Quixotic requests are just fine, and it is not the job of the courts to impede this process.

“…causing irreparable harm.” ? “…continue to be subject to rulings…” ?

Does Ragucci really want to pursue this? Does he want to risk additional sanctions for wasting the Court’s time?

Sounds like Ragucci is shoveling harder from deep inside a deep hole. If the appellate court does not agree, he gets the thrill of appearing in front of the same judge.

And the saga continues. The OHPA meeting tonight was set before a full house, with the closing act a unanimous resolution to remove Mr. Ragucci from the role of Port Director, and to leave that position as vacant for now.

Perhaps a criminal referral to the U.S. Attorney, Northern District of Florida…

Ready to watch the show.

How will all this turn out?

The courts are asking for disclosure, the tax authority is stripping the exemptions, the City is in full combat mode, the residential neighbors are organized and activated, the Historic District businesses are concerned and talking about all this, and the entire county is wondering what the heck is going on down there……

Since the Port Authority is a public entity, they should ask why it seems this trouble is upon them. Is it just a bunch of tree-hugging ner-do-wells, or is there something to all this fervor? Elected to represent the people. Yes, all of Nassau County.

If the port commissioners ask their constituency: “Should the Port create jobs?” Of course anyone will say yes.

Further, if they ask: “Should the port create jobs and damage the Historic District, destroy residential neighborhoods, and create a traffic mess too?” I suspect this is the correct question to ask, because it is far more accurate.

I can’t believe the commissioners would consciously act to harm Fernandina. However, this particular plan has more than a little harm involved.

My hope is the commissioners ask if this action is really going to serve the greater good by throwing Fernandina under the bus….. or truck in this case.

Jobs for who? Methinks it goes to shippers and truck drivers in the region, as opposed to Fernandina Beach proper. And which companies install port-specific equipment. Methinks, not FB-based companies. And as is noted in other comments here – the upside is “taking” of FB property private and public plus increasing truck traffic on 8th Street?

You must ask, why the refusal to turn over documentation that clearly is covered by the Government in the Sunshine law? If everything is in order and above-board, then there should be NO PROBLEM!

We depend on our judges for wisdom, grounded in the law. Judge Fahlgren does so with this move. There are more important issues that require his time. Mr. Ragucci’s frivolity is not among them.