Section 71 of the Fernandina Beach City Charter requires the City Manager to “set forth an estimate of the expenditures and revenues of the city for the upcoming fiscal year. … The estimates and budget so given and constituting the recommendation of the City Manager as to the amounts necessary to be appropriated for the ensuing fiscal year shall be supported with information giving the reasons therefore in such detail as may be necessary to afford the City Commission a comprehensive understanding of the needs and requirements of the various departments and divisions of the city government for the ensuing fiscal year.”

City Manager Dale Martin discharged this obligation at the July 20, 2021 FBCC Regular Meeting.  Martin presented his proposed budget in a series of 11 slides.  The next step will be taken by City Commissioners, who will discuss and debate the Manager’s proposal and set the millage rate for the next fiscal year, which begins October 1.  Simply put:  the City Manager proposes, but the City Commission disposes. 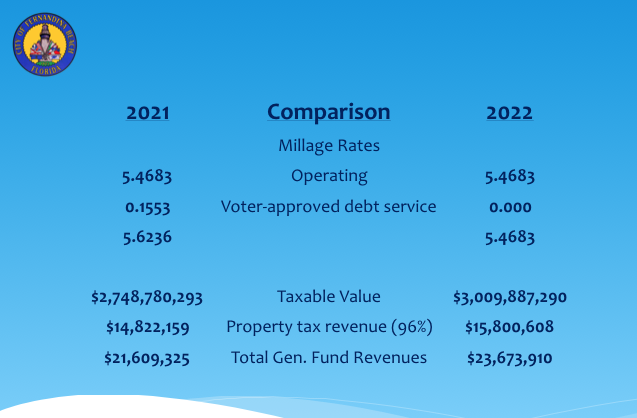 Martin’s proposed budget for FY 2021-22 calls for keeping the current millage rate of 5.4683.  However, since the voter approved debt of $6M to pay for the Greenway has been retired, tax payers will see a decrease of 0.1553 in their City tax bill.

Since under Florida statutes, the proposed operating millage rate exceeds the “roll-back” millage rate by 0.3615 mills (7.07 percent), the proposed flat rate constituted a tax increase.  The proposed rate would result in an estimated increase in City property taxes for “homesteaded” properties of approximately $8 per $101,400 of Taxable Value.  For “non-homesteaded” properties that collectively saw property values increase 7.3 percent over last year, the estimated increase in City taxes is $40 per $107,300 of Taxable Value.  These values re set by the Nassau County Property Appraiser, not the City of Fernandina Beach.

As has been explained previously, City taxes make up only part of the total tax bill that City property owners receive.  Included in the bottom line are Nassau County and School District taxes as well as some smaller taxes to support the water management district, control mosquitos and support the inland waterways.

Martin is proposing some reorganizations to promote efficiency in those areas supported by the City’s General Fund.  As a result the net change for personnel is plus one.  However, with respect to the City’s enterprise funds, he proposes a net change of plus 14, with more than half of those positions (7.5) to be added to the Golf Course.

Reorganizations are already in the works.  There will be a new department named Community Services that will include those departments formerly in the Community Development Department (Building, Code Enforcement, Conservation, Planning) plus the Parks and Recreation Department.  City Engineer Charles George will serve as director of the  new department.

The Streets Maintenance Department will be eliminated.  Retained staff will be reassigned to Utilities, Facilities, and Sanitation Departments.

The list of Capital Projects to be funded by the General Fund and those projects proposed to be funded with impact fees as Capital Expansion Projects are provided below. 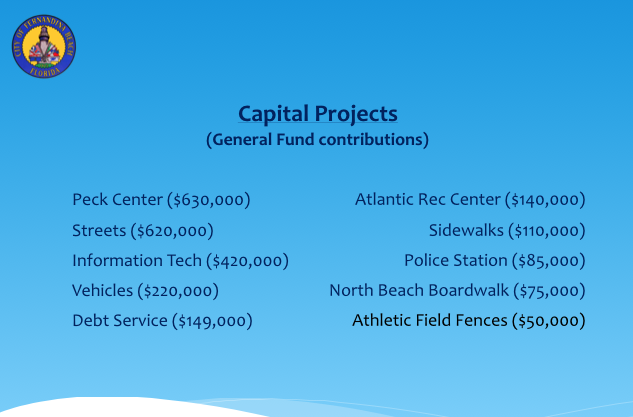 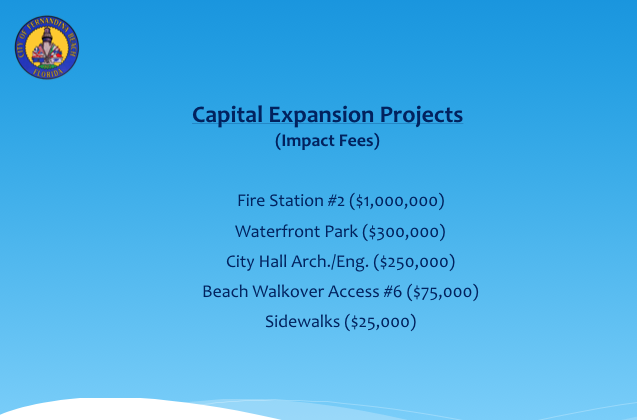 Martin proposes to use the $5.5M provided to the City via the American Rescue Plan to support projects to improve waterfront resiliency and stormwater as well as the new fire station.

There will be a Special Meeting of the FBCC on July 27, 2021 to set a tentative millage rate.  Two FBCC workshops on the budget have been scheduled thus far (August 4 & 10).

At the FBCC workshop that preceded their July 29, 2921 Regular Meeting, Commissioners discussed the lengthy (and costly) list of capital improvements needed to overcome years of deferred maintenance and political indecision by previous Commissions.  They agreed to explore the possibility of going to the voters for permission to obtain a General Obligation Bond (GOB) to pay for conservation land purchase, infrastructure and facility improvements.  More discussion on what projects to cover with a GOB will be debated at August meetings.

Should the FBCC decide to pursue a GOB, the citizen referendum will be placed on the 2022 City Election ballot.

Following Martin’s presentation, Commissioner Chip Ross offered comments.  “The world we live in requires us to be dependent on others for energy, food water, sanitation and other necessities.  Our City residents all rely on the City to provide clean water, safe sewage disposal, trash removal, police protection, EMS services, fire protection, drivable roads, stormwater removal, public parks and clean, accessible beaches. Fine life and living here depends on the quality of these services, which re all performed by the people whom we hire or contract for.  Without those workers, none of us would live here with any quality of life.  The better they perform their jobs, the better the quality of life on the island.  The average City tax bill is $1,100.  Approximately $3 per day that pays for many or most of these services.  I believe that’s a bargain price.  Instead of asking what materials and equipment City workers need to do their jobs effectively and how to pay City workers a living wage, there are a few taxpayers who demand we cut staff and the resources staff need to do their jobs.  But I hope as a City Commission we would support our City staff and our residents’ quality of life by focusing on a budget that gives our City workers the tools to do their jobs and a living wage.”

Commissioner Bradley Bean thought otherwise.  Bean said, “The people of Fernandina need only one thing:  to go to the roll-back rate.  I do not want to raise taxes on the hard-working families of Fernandina Beach.  I am opposed to tax increases, because where does it end?  This year it’s $8, $40, but that’s not just this year.  It’s this year, next year and following years.  That [increase] is in perpetuity.  It’s not just us.  The County and the School Board will also raise taxes.  I’m opposed to a tax increase because I want our hard-working families to stay in their homes right here in Fernandina Beach.”

I fully agree with the comments by Chip Ross. We taxpayers have the obligation to pay for the services we receive from the city’s employees. We should not scrimp on those services nor on the number of employees, whose salaries are very justified.