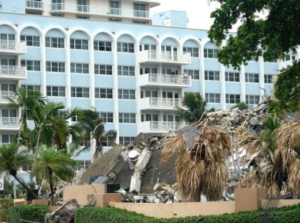 Florida does not have specific licensing requirements for structural engineers and, by state law, any professional engineer can sign off on building plans and inspections.

In the wake of the Surfside condominium collapse, an ad hoc collaborative of four engineering associations is calling on lawmakers to establish licensing requirements for structural engineers and to beef-up Florida codes that now only require visual inspections to verify a building’s integrity.

The 12-story, 136-unit beachfront Champlain Towers South condominium in Surfside collapsed June 24 at 1:25 a.m. As of Friday morning, 64 bodies had been recovered with 76 people missing.

“The @ACECFL and @FES_FLeng, along w/ structural engineering associations are looking into whether FL should require mandatory re-inspections of tall buildings, who should carry them out, & how it can be done w/o being prohibitively expensive,” the FES tweeted Friday.

The condominium’s destruction “is likely to be considered the most tragic structural building collapse in Florida history,” FSEA President Douglas S. Wood said in a statement. “This tragedy reminds us all of the absolute necessity for the expert design, construction and maintenance of our building structures and bridges.”

The engineering groups want a vetoed 2015 bill unsuccessfully re-introduced in 2021 to be adopted in 2022.

That 2021 bill, Senate Bill 572, proposed authorizing the Florida Board of Professional Engineers to establish licensing standards for structural engineers and encode statewide criteria for structural analysis of “threshold buildings,” defined as those higher than 50 feet, three or more stories tall, or house more than 500 residents.

Toledo, the only certified engineer in the Legislature, told reporters Thursday she has discussed refilling the bill with the Governor’s Office and House Speaker’s staff. “Surfside definitely made it a bigger concern,” she said.

In 2015, lawmakers passed a bill licensing structural engineers but then-Gov. Rick Scott vetoed it over uncertainty about how it would apply to currently licensed engineers.

Routine structural evaluations of high rise buildings are commonplace nationwide but not in Florida, where there is no statewide requirement to test the integrity of concrete, waterproofing and reinforcing steel in foundations and subsurface conditions.

Miami-Dade and Broward counties are the only Florida counties that require high-rises be inspected at 40 years of age. Champlain Towers was undergoing that process when it collapsed.

Nevertheless, the four associations, collaborating via informal exchanges, say they want to develop revised buildings code and inspection protocols before lawmakers return to Tallahassee in January for their 2022 session.

Among tentative proposals is creating criteria for who is responsible for re-inspections and how they should be conducted without imposing too much costs. Inspection costs can range from $5,000 to $200,000 depending on the structure’s size, and can result in millions of dollars in repairs.