Mary Gauthier in Concert July 10 at Story and Song 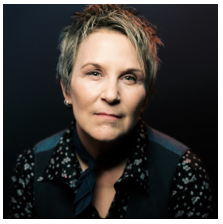 Songwriters like New Orleans native Mary Gauthier (pronounced GO-shay) know only too well that some of the best music ever written stems from personal difficulties and despair. Her adoptive father was an alcoholic, so Mary and her younger brother, also adopted, also turned to alcohol to numb pain. She had drunk herself unconscious on sloe gin by the time she was twelve, and ran away from home at fifteen after seeing other gay kids like her commit suicide. She celebrated her 18th birthday in a jail cell. After a stint at the Cambridge School of Culinary Arts, Gauthier got the backing to open a restaurant in Boston’s Back Bay, but was arrested again for drunk driving on opening night. This time around, she was finally motivated to get clean and sober. Having been a fan of Patti Smith, she was encouraged by some songwriters she met from the nearby Berklee School of Music to write her first song when she was 30 years old, drawing heavily on her life experience.

Three decades and eleven albums later, Gauthier is recognized as one of Nashville’s top singer/songwriters. All the songs on her latest Grammy-nominated album, “Rifles and Rosary Beads,” were co-written with wounded veterans as part of the Songwriting With: Soldiers organization. “Songwriting saved me,” says Gauthier. “It’s what I think the best songs do, help articulate the ineffable, make the invisible visible, creating resonance, so that people, (including the songwriter) don’t feel alone.”

Mary Gauthier will perform her songs at “An Evening of Story & Song”, Saturday, July 10, 5 pm, at Story and Song, 1430 Park Avenue, Fernandina Beach, FL, and will talk about her new book, Saved by a Song: The Art & Healing Power of Songwriting at a literary luncheon at Story & Song the next day.
We’re honored to have been chosen as the bookstore to launch Mary’s new book, and hope that you’ll join us, not only to listen to some remarkable stories, but also to experience a concert performance by a first-class artist.