“Introduced into the record was a letter addressed to County Attorney Michael Mullin, dated June 10, 2021, and signed by Fred D. Franklin, Jr., of the law firm of Rogers/Towers. Franklin is the attorney of record for Riverstone – a company intimately interested in developing that very 50-acre parcel.”

The second Monday of the month means the Board of County Commissioners held one of its regular meetings. The date was June 14th, 2021, at 6PM.

For the first time in well over a year, the room was filled to capacity– in large part due to one, (if not two) item (s) on the agenda including:

• an ordinance to limit the height of new buildings in the unincorporated areas of Amelia Island, and

• an ordinance addressing rules and regulations regarding electric bikes

The ordinance to limit the height of new construction passed by a vote of 3-2. 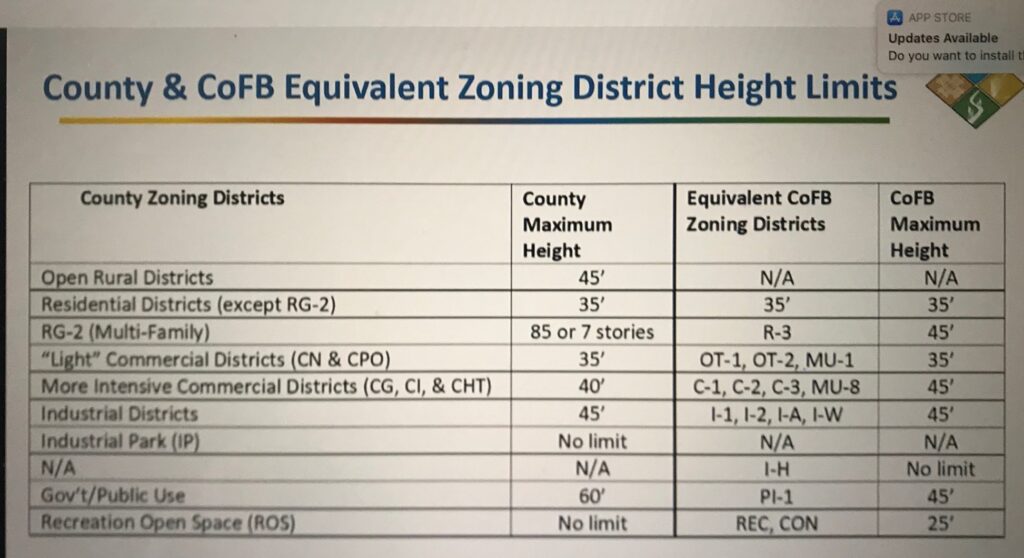 As passed, and in short, the ordinance makes Nassau County regulations consistent with Fernandina Beach “City” height restrictions and, as passed, applies only to NEW construction.

For example, The Amelia Surf and Racquet Club is comprised of 156 units – three 7-story buildings. Should a hurricane destroy any or all the buildings on this oceanfront property, buildings could be rebuilt to their original height — but nothing higher.

Numerous members of the public signed up to speak about the proposed ordinance – both for and against.

Under the “old” County ordinance, maximum permitted height of multi-family dwellings was 85 feet (about seven stories).

Under the “new “ordinance, and consistent with “City” code, such structures cannot exceed 35 feet – or about three stories.

All of that being said, there is just one undeveloped parcel remaining on the unincorporated areas of Amelia Island and it is a 50-acre property on the South End of the Island.

Introduced into the record was a letter addressed to County Attorney Michael Mullin, dated June 10, 2021, and signed by Fred D. Franklin, Jr., of the law firm of Rogers/Towers. Franklin is the attorney of record for Riverstone – a company intimately interested in developing that very 50-acre parcel.

The letter read: “If the County chooses to proceed with the adoption of this ordinance in its present form, Riverstone will have no choice but to pursue all available remedies.”

Opponents to the revised ordinance uttered phrases to the effect that it constituted an “unconditional taking of property” and referred to it as a “regulatory gut-punch,” while others spoke about the problems potential buyers might encounter in getting a mortgage and also the “availability and affordability” of insurance.

A staff report provided by the Department of Planning and Economic Opportunity stated “it is the intent of these changes to protect the unique character of the barrier island and provide for sustainable shoreline development. The ecology and aesthetics of Amelia Island’s unique and fragile coastline would benefit from lower building heights, which would help to retain scenic views enjoyed by residents and visitors. Keeping building height more in line with tree canopy height will provide a long-term public benefit that will help retain the Island’s charm and unique character, a quality of life that will strengthen the Island’s economy and culture.”

Places like Miami Beach, Myrtle Beach and Daytona were referred to as other “over-developed” resort locations which the voters and residents of Amelia Island do not want.

Apropos to the discussion was a presentation given by County Attorney Mullin on the “Bert Harris Act,” otherwise known as the Private Property Rights Protection Act.

As outlined in Mullin’s presentation, “The Bert Harris Act created a new cause of action for private property owners whose real property is inordinately burdened by a government action not rising to the level of a taking.”

Mullin went on to explain, that “before filing an action under the Bert Harris Act, a claimant must generally give 150-days’ notice to the government entity along with a valid appraisal showing the loss in the property’s fair market value.”

Once things proceeded to “Board Discussion.” Commissioner John Martin (representing District 1) stated that he wanted to make sure “we are not willy-nilly approving something without taking into consideration a possible downside to the taxpayer . . . [that] there is a process in place to mitigate that downside.”

Martin acknowledged that he knew about the Riverstone issue but was not aware of other concerns regarding mortgages and insurance.

In agreement Commissioner Martin, Aaron Bell stated that a 150-day window would provide amble time to “fix’ or “tweak” a few items.

Commissioner Farmer asked about perhaps delaying a vote on the ordinance change to which Commissioner Martin reiterated his stance that 150 days would provide ample time to “drill down deeper” and his suggestion was supported by Commissioner Bell. Again, that vote was 3-2.

Regarding electric bikes, a staff memo to the BOCC stated:

However, Florida Law does require that anyone under the age of 16 wear a helmet.

After much public input, County staff was requested to bring to the BOCC, a new draft ordinance that would reflect the comments and concerns expressed.

The proposed ordinance, expected to be presented at the next meeting of the BOCC, will be consistent with State law and will NOT differentiate between “types” of electric bikes – be they Class I, II or III and a speed limit of 10 miles per hour will be posted on county trails.

To view any BOCC meeting in entirety, please go to https://www.nassauclerk.com/watch-meetings/.