(The Center Square) – Teacher pay in Florida averaged $49,102 for the 2019-2020 school year, the third lowest rank among the 50 states and the District of Columbia, according to data released last month by the National Education Association (NEA).

For the current school year, the NEA projects that the average public school teacher salary will rise by an additional 1.5 percent, to $65,090. 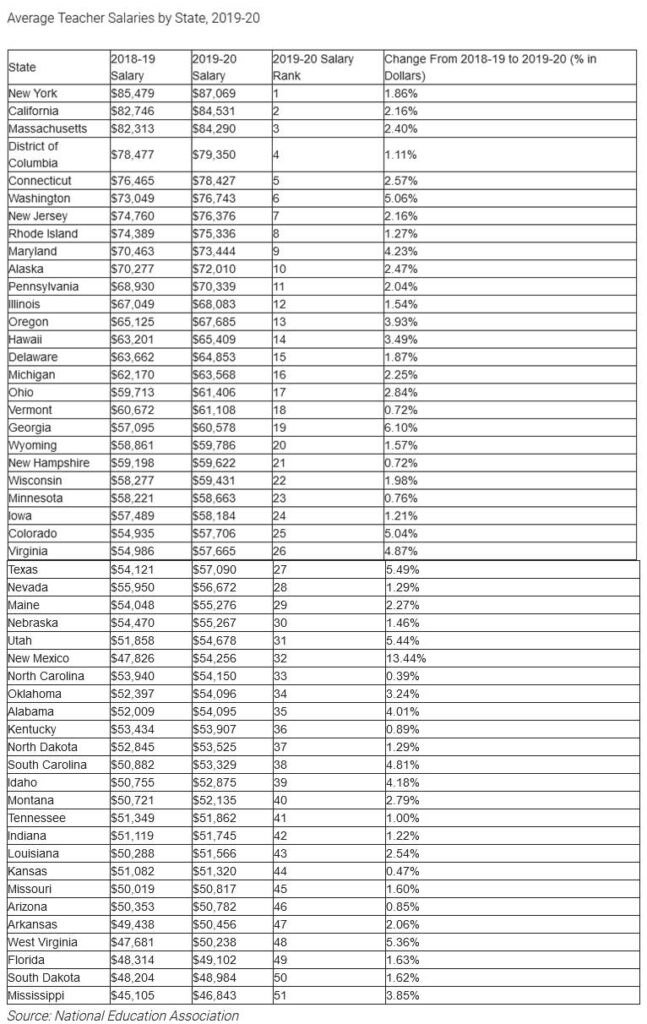 Shame on. Florida–3rd lowest shows we do not value education, and certainly do not value our teachers. Pay more and attract quality people.

Well that helps explain the political situation in Florida. Ignorance is bliss.

The largest portion of your annual real estate tax is the school board. Florida values its education and as a result they fund support for public and non public education. Each parent should have a choice to give their children the best education possible. The NEA and the FEA have been notorious for supporting their institutions over improving education. The US is ranked very low, when compared to other nations. It is not a function of salaries, just look at the upper 5 states in salaries and then analyze their education results. I have many family members that are or have been teachers and we have had long talks about the problems within the system. The bottom line is, if you have moved to Florida and don’t like the way we do things then go back to where you cam from. It was obviously better there.

This is evidence of misplaced priorities in a state that certainly can afford to pay its teachers more.

Should Florida teachers get paid more? Probably yes, and so should law enforcement personnel, but I’m not going to analyze that here. While gross salary comparisons are interesting, comparing some of the regional costs of living may provide a more useful indication of how far a well-paid teacher’s salary will go.

For comparison, I checked my Long Island boyhood home on Zillow. This 1800 sq ft home (built in 1949) is worth a bit over $600k. Mortgage is estimated at $3,500 monthly. Current property taxes on that modest home are more than $13,000 annually. In addition, your average teacher will pay more than 6% ($5,000) in state income tax. The money that’s left is taxed at 8.625% when they spend it on high-priced goods and services. (The plumber has to pay his high rent and taxes, doesn’t he?)

I know for sure that paying four times the taxes in New York doesn’t get you four times better roads and beaches than we have here in Florida. And finally, it doesn’t look like the higher teachers’ salaries are benefiting NY students to any great degree.