Can this waterfront warehouse be saved? 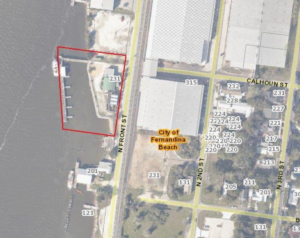 In October 2020, owners of an old, wooden warehouse at 231 N. Front Street in Fernandina Beach approached the City for a permit to demolish the structure, because it has not been used for years.  According to the application, the building was once the office for Florida Petroleum Corp. and later rented to Walthall Oil.  It has always been used as a petroleum company office and dates to the late 1920’s.  There is no desire to remove the tanks, which are leased and operated by Port Consolidated as a commercial fueling dock.

While in the initial staff report in October, City staff did not deny the request, they began working with Richard Higginbotham, agent for Hall Investments (current owners), to determine if the structure could be relocated to a new location on the waterfront to serve a civic purpose as one of the last few period structures of the City’s working waterfront.  Hall Investments expressed a willingness to donate the building without charge, should any party be willing and able to move it from their property by June 2021.

Unique architectural elements of the old warehouse made it worthy of saving in the minds of many preservation minded locals.

In the intervening months various avenues have been pursued without success.  Restaurateur and downtown businessman Tim Poynter appeared before the Historic District Council (HDC) this spring to express an interest in moving the building to property he owns on N. 2nd Street adjacent to his miniature golf course.  However, the HDC balked.  While giving Poynter a conceptual approval, the HDC maintained that it preferred to see the warehouse relocated to a waterfront location in keeping with the history of the building.  Given that the building owners wanted the building gone by June, Poynter effectively abandoned the idea, since much time would be needed to work out the details to obtain final HDC approval.

The City of Fernandina Beach restated its lack of interest in acquiring the building as late as May 18, 2021 when Mayor Mike Lednovich raised the issue during a Fernandina Beach City Commission (FBCC) workshop.  Staff has been in conversation with another party interested in the building, but to date no agreement has been reached between the owners and the potential developer.

The potential new owner would move it to City waterfront property to replace the building that currently houses Atlantic Seafood.  Before that can happen, the Atlantic Seafood lease needs to be transferred to a new leaseholder and new terms need to be negotiated.  The City is not party to the discussions between the current and potential future owners of the building itself.  City Manager Dale Martin advised the Fernandina Beach City Commissioners (FBCC) during the workshop that when revised terms of the lease are agreed upon, that lease will come before the FBCC for approval.

Vice Mayor Len Kreger argued that the City does have “skin in the game,” because the FBCC has not yet approved a plan for placing buildings in what will be the waterfront park. Conceptual plans have called for possibly adding buildings between the boat ramp and the dock leading to the dinghy docks.  There would be 28,000 square feet of space available for lease as a single parcel or in 2-3 smaller parcels.

The current leaseholder of Atlantic Seafood has expressed interest in a 9,000 square foot share of this parcel to relocate the business.  A new home for Atlantic Seafood must be found as part of the shore stabilization project which is currently out on bid.

Lednovich expressed concerns that the City has invested a lot of time and work in a plan that may not come to fruition.

Commissioner Chip Ross suggested that the FBCC should review the plan, which would be a public/private partnership, when it is formally presented.  “There are a whole bunch of things that are speculative in this,” he said, “but without the background work, it can never happen.”

Ross acknowledged that whether or not this ever materializes depends to a large extent on the willingness of the Hall Investments company to continue to allow the warehouse to occupy its property until all details can be worked out.  The owners originally agreed to hold off demolition only until June.

Richard Higginbotham, the agent for owners Hall Investments, indicated that the deadline for building removal is end of July.  The offer to provide the building at no cost to a party willing to move it will expire at that time.

Members of the Historic District Council expressed their gratitude for the owners’ patience in working with the City and community to find a new home for the old warehouse.