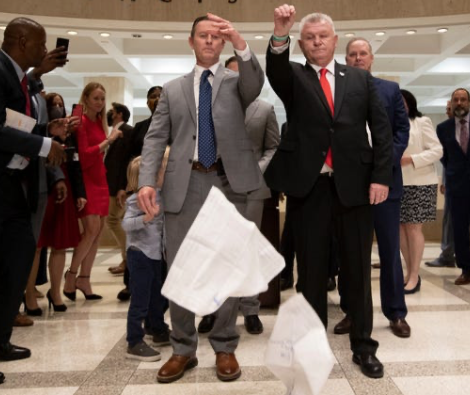 But this year, the full ceremony, hankie and all, returned as lawmakers, staff and other officials crammed into the fourth floor rotunda, few with masks, to witness Senate President Wilton Simpson, House Speaker Chris Sprowls and DeSantis bid farewell to the last 60 days.

The Governor recalled the ominous feeling and the clouds “gathering on the horizon” last year. But the Sunshine State has weathered it well with time, he continued.

“I think today, what’s been achieved in this Session, says that this next year, 2021, the state of Florida’s come roaring back,” DeSantis said.

Moments earlier, lawmakers had adjourned on the final day of the Legislative Session after passing the last batch of priorities off the floor, including the $101.5 billion budget plan. They approved the budget nearly unanimously, with only one dissenting vote in the House.

That budget is the state’s first spending plan to top $100 billion. However, much of that comes from federal funding to combat and recover from the pandemic.

With the crowded halls and few masks, contrasting the strict policies the House and Senate had in place at the start of March, the pandemic seemed largely in the rear view mirror. But Simpson reflected on the hardships many faced over the last year.

“None of us who stood here at the end of last Session could have predicted what the people of our state and nation have endured over the last year,” he said. “The pandemic has robbed us of mothers, fathers, friends and neighbors. Families and business across our state are still feeling these impacts each and every day.”

In his speech before the House, Sprowls told members that he spoke with his Senate counterpart nearly every hour during the closing days of the Session.

“During Organizational Session, I gained as a colleague, a partner, President Simpson, but over the time that we spent working together a great friend, and Florida has had a great leader in the Florida Senate,” Sprowls said.

The Legislature passed several of the Governor’s priorities, including the anti-riot bill, COVID-19 liability protections, election law changes and part of his package to crack down on Big Tech.

Before leaving the House chamber for the final time this Session, and before presenting a video of the highlights from the last 60 days, the Speaker declared most of the legislative agenda finished, including for the next year.

“Together, we didn’t prepare for the next Legislative Session,” Sprowls said at the ceremony. “We prepared Florida for the next decade.”

Simpson never earned the increase he wanted to unemployment benefits. And lawmakers never solidified the bipartisan half of the Governor’s Big Tech proposal to increase internet users’ data privacy.

Moreover, lawmakers will convene for a Special Session in about two weeks to consider gambling matters and DeSantis’ Gaming Compact with the Seminole Tribe.

“Our budget looks great, but why not get more in the kitty,” DeSantis said.