AMELIA ISLAND, FL, APRIL 27, 2021 – Since its inception in 2017, the Grand Motoring Hangar Night has thrilled audiences with the breathtaking confluence of cinematic art and automotive excitement. This year, however, the festivities kick into high gear with a slew of special events throughout the evening. 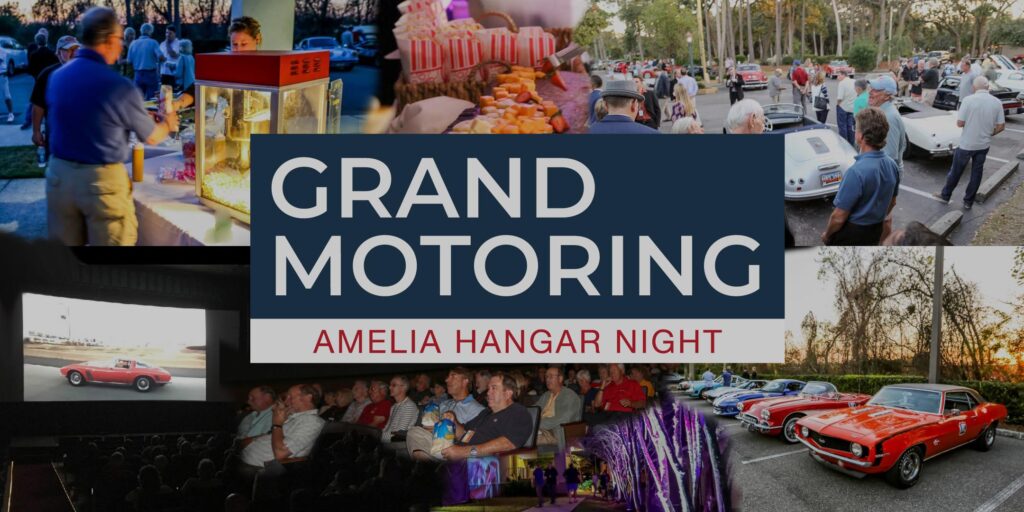 As the southeast’s premiere source for automotive films, Grand Motoring has screened some legendary movies such as “Winning: The Racing Life of Paul Newman,” “The 24 Hour War” and “Steve McQueen: The Man and Le Mans.” This year’s featured film, shown alongside a series of acclaimed shorts, takes moviegoers inside the illegal, underground world of U.S. transcontinental racing with “APEX: The Secret Race Across America.”

Following thrill racers Alex Roy and Dave Maher as they tear across America in a BMW M5 in pursuit of a new coast-to-coast Cannonball record, and narrated by Ice-T, this film shines the spotlight on the secretive world of transcontinental racing.

Star Alex Roy will be on hand during this year’s Hangar Night to introduce the film and answer questions from the audience. “I’m really excited to share this film, and I think it’s going to be eye-opening for a lot of people who didn’t realize this whole culture of cross-country racing exists.”

But more than simply the films, Grand Motoring Hangar Night is an opportunity for participants to view some jaw-dropping collector and classic cars on display. This year, two separate rally tours will end with a checkered flag at Hangar Night, adding to an already exciting evening.

The first, Hagerty’s Amelia Island or Bust Tour, will end their multi-day rally at the event for the fifth consecutive year. Starting off outside of Baltimore on May 15, this rally will criss-cross the backroads of the southeastern U.S. before roaring into the finish line at Hangar Night.

The second rally is the Amelia Island region’s home-grown “Coastal Motoring Tour,” organized by Concours LLC. Launching from the legendary Brumos Collection, and running through some of the area’s most scenic highways and byways, the Coastal Motoring Tour will arrive just in time for Hangar Night.

“Every year we try to find some way to top the previous installment of Grand Motoring Hangar Night,” said organizer Guy Smith. “Already our fifth annual event is shaping up to the best ever, and we still have a few surprise announcements to make as we get closer to pulling back the curtain.”