The South Amelia Island Shore Stabilization Association (commonly referred to as SAISSA) was victorious at the Board of County Commissioners meeting of April 13, 2021, when the BOCC approved by a unanimous vote a resolution:

• to impose assessments to fund the beach renourishment project
• to approve the assessment roll; and
• to collect said assessments

The vote did not occur without major discussion, dissension and lots of public participation. For the first time in a long time (since the outbreak of the COVID pandemic), the Commission Chambers room was full, albeit with social distancing being practiced and masks being worn. Thirteen emails were submitted prior to the meeting and there were 23 participants at the meeting including members of the SAISSA board and the general public. Even SAISSA attorney Buddy Jacobs participated via Zoom. In fact, the BOCC did not adjourn until well after 9:00pm.

This is the third beach renourishment project for the south end of the island—all of which have been conducted under the leadership of SAISSA – an association “blessed” by the Board of County Commissioners.

Formed in 1993 SAISSA was created “to protect, preserve, restore and enhance the beach/dune system on the south end of the Amelia Island.”

SAISSA Board Members include residents of River Stone, The Sanctuary, The Residents, The Retreat and the Amelia Island Plantation – in addition to The Omni.

SAISSA provides the official body to oversee beach renourishment operations and is “backed by” the Board of County Commissioners providing greater power and legitimacy to applications for grants and other fundraising activities. Having the backing of such a government entity, often helps bring to life the visions of many such projects.

While such an arrangement seems to guarantee legitimacy, promise and success, that was not, by any means a “fait accompli” on the night of April 12. 2021. 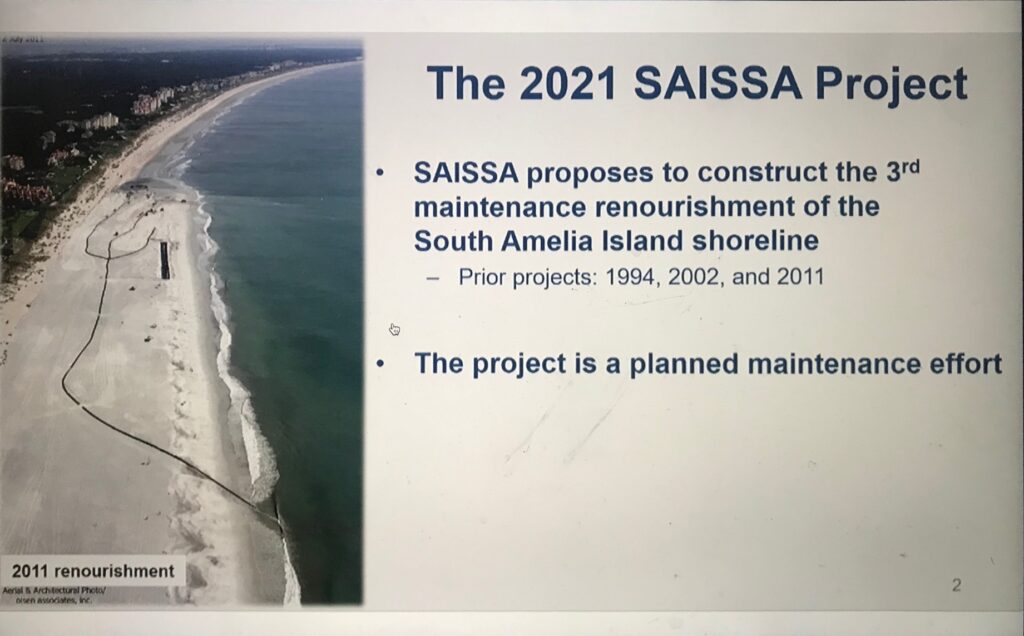 For more than two hours, members of the BOCC heard protestations against the proposed beach renourishment project on the south end of the island.

But that is not to say that those in favor of beach renourishment were not in force as well. They were and many of those residents gave testimony to its value and importance.

Reduced to a minimum, the arguments against a new beach re-nourishment project might be summarized by saying “the beach is beautiful, there is no reason to renourish” at this point in time while proponents say that it is because of past beach renourishment projects that the beach on the south of the island is in such great shape.

But that was not the end of it. During the marathon meeting, other charges were levied against SAISSA that included its attempt(s) to “squash dissent,” that activities of the SAISSA board were “troubling and corrupt,” and that there was much “self-dealing.”

Also mentioned were concerns relating to a loss in property values, that renourishment projects take too long and that during these projects, anybody who walks the beach, including grandchildren, is subject to almost certain injuries as a result of the “shell hash” content of the sand.

Plantation resident Frank Hopf was the among the first to assert his distaste and opposition to the “new” project. Hopf, a local resident who earned a PhD in Geography and Geomorphology from Texas A&M, was the first speaker to request extra time. His request was granted as were the requests of practically every speaker that followed.

SAISSA, its team of engineers and the BOCC were united in the belief that that beach on the south end of the Island was in good shape ONLY because of beach renourishment efforts. Two permits are required for the project to commence – the Consolidated Coastal Permit and Sovereign Submerged Lands Authorization from the Florida Department of Environmental Protection which has been received and the U.S. Army Corps of Engineers Permit which is expected any day now, according to Project Manager Bill Moore who was reached the following day.

At the end of the evening, the resolution approving the expenditure of funds was approved unanimously. Each and every member of the Board of County Commissioners extended their praise for all the citizen participation.

If all permits are in place, project construction is slated to begin on May 1, 2021 and is expected to last approximately three months. The approved resolution specifies the cost of construction is not to exceed $16,600,000.