During a two-hour workshop preceding their Regular Meeting on April 6, 2021, the Fernandina Beach City Commission (FBCC) listened intently as 21 individuals brought forth their complaints, concerns and compliments for the City’s Building Department.  Speakers were allowed three minutes to state their position on a variety of issues; some offered suggestions for improving current processes required to secure City building permits.

The threads about the Building Department that ran through the complaints could be categorized as disrespectful interpersonal dealings, length of time required to process a building permit, fees, “by the rule interpretations” of code in every circumstance, and widespread fear of reprisal for bringing complaints forward.  Complainants also expressed frustration with the linear nature of permit processing, advocating that plans be reviewed concurrently by all reviewing authorities.

Other speakers complimented Stephen Beckman, the City Building Official, for his accessibility and interpretations.  One speaker, a state certified building official who has also served on the Florida Building Commission, said that he has had no complaints in dealing with Beckman, whom he characterized as “respectful, expeditious, and doing things the way they should be done.”

Five speakers represented the Nassau County Chamber of Commerce.  They addressed results of the recent survey they conducted to determine level of satisfaction with current Building Department staff and procedures.  Regina Duncan, Chamber President reported via email that Chamber of Commerce staff, Government Affairs and Board developed the survey. She wrote, “Outreach for participants was done through our network of businesses (members and nonmembers), NEFBA, Realtors, Clubs and associations and an aggressive/targeted social media campaign.  The survey ran from March 2-12, 2021.  Projects were indicated by period from current to 2018 or before.”

Summary results of the survey are presented below, representing responses of 84 businesses and 80 homeowners. 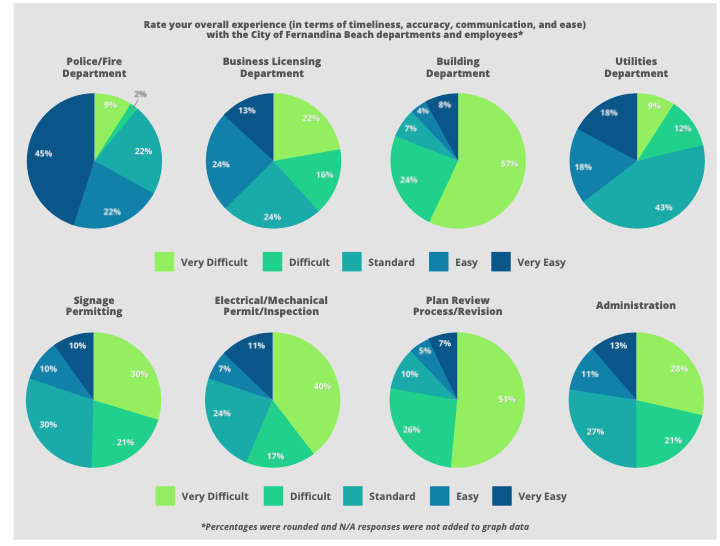 Mayor Mike Lednovich convened the workshop in response to a high level of dissatisfaction with the Building Department operations and staff as reflected in that survey in which 164 respondents — a mix of homeowners, businesses and building professionals — provided input.

Six other speakers, expressed satisfaction with Building Official Stephen Beckman and his code interpretations, while expressing concern in some cases over the length of time and cost of getting a building permit.  Ten speakers expressed stronger dissatisfaction, citing examples from their own experience as project owners, contractors or architects.

The FBCC listened to speakers for an hour and a half before proceeding to discuss the problems identified and consider recommending solutions.  Commissioners were in agreement that steps were required to address deficiencies identified by the speakers.  All commissioners expressed concerns over the allegations of disrespect shown to customers by Building Department staff.  They agreed that no customer should be reluctant to come forward out of fear of retaliation, another allegation cited by some speakers.

Vice Mayor Len Kreger waved a copy of the Chamber study, saying “This is a significant problem. This chart is devastating in what it shows.”  Kreger expressed the need to address fees, the scope of the permit and systems.  He also said there needs to be a documented process for dealing with City staff and their relations with the public.  In response to some suggestions that the County be asked to take over the City Building Department functions, Kreger said that County Attorney Mike Mullin has told him that the County is not interested in doing so.  Kreger reminded the audience that the County Building Department also has large financial reserves.  He wondered about the value of privatizing some of the services and examining the current fee structure. 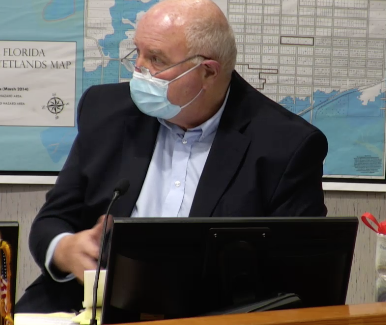 Commissioner Chip Ross summarized complaints as falling into one of three categories:  the message, interpretation of code, or the messenger.  Ross said that the problems identified have been going on for years, not restricted to the current Building Official and staff.  He reminded Commissioners and the audience that it is more difficult to build in the City than in the County because the FBCC over years has imposed more restrictions than the State Building Code to regulate building height, setbacks, trees and wetlands; flood ordinances regulate building in the flood plain.  He said that local fees are in line with other communities.  In order to address the interpersonal issues, Ross suggested that Building and Code Enforcement staff be equipped with body cameras when they perform site visits.

Ross also indicated that comparisons with the County Building Department were problematic because operations were not exactly parallel and work was spread among more staff in the County.  He also noted that reserve revenues for both were over $2M.  He offered the following chart: 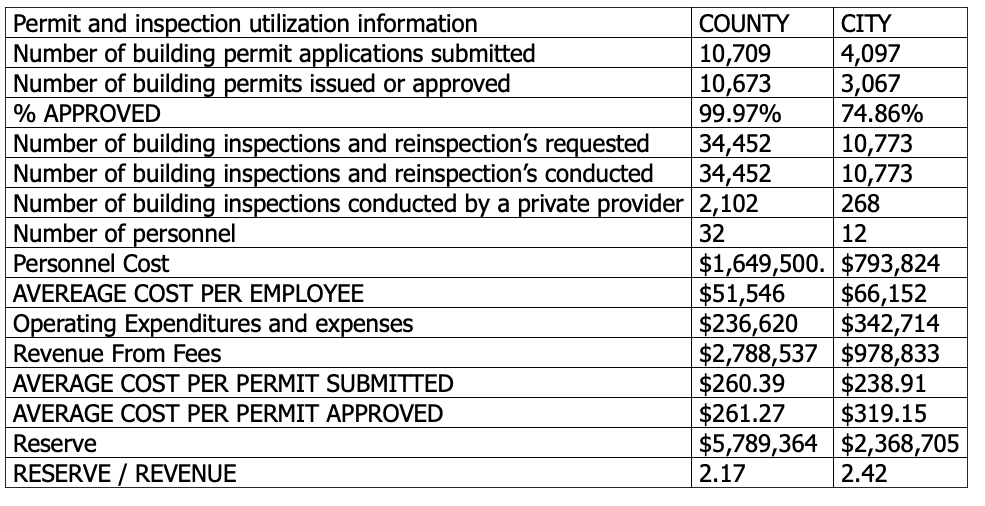 Commissioner David Sturges, who is a contractor by profession, addressed the good and bad aspects of the Building Department operations.  He observed that the Department has caring people, noting that the Building Official even responds on weekends, something that he has not experienced in the past.  “Codes and regulations are there for a reason, to protect the health and safety of our residents,” Sturges said.  He acknowledged that the Building Official took over the job a relatively short time ago and that “he has moved harder and faster than anyone I’ve ever seen.  This is why we are having so much push back from [building professionals] I believe.  He is going by the letter of the law, putting in hours to do things right.”

However, he noted that processes and operations need “tweaking” so that projects can move more quickly.  “We need a better system,” he said, “but the good part is that we are working on it.”  Sturges supported the call for a Board of Appeals.

Sturges identified another part of the problem:  the number of departments that are involved in reviewing and approving permits.  Planning, Utilities and Building all have a say, but to the lay person all the activity and time spent is lumped under the Building Department because that department issues the final permit.

Sturges spoke about the number of calls he received with complaints, noting that those people did not show up during the workshop to speak.  He affirmed that people fear retaliation for making negative comments.  Sturges expressed support for the Building Official while calling for additional training and supervision to help him deal with management issues.

“The good part,” Sturges said, “is that we recognize the problems and we are trying to do something about them right now.  Otherwise we wouldn’t be talking about them.  We need to do something, to spend the money to bring in staff to help get the work done.”

Commissioner Bradley Bean agreed, saying that the situation is “worse than everyone says.” “It is a huge issue that must be tackled,” he said.  He supported the idea of creating an advisory committee to rule on complaints, but stressed that the City needs its own Planning Department, even if consideration would be given to combining Building Departments in the County.

Mayor Lednovich spoke last.  He called for an appeals process to be able to respond to complaints quickly.

In summarizing the workshop, Mayor Lednovich offered the following direction to City Manager Dale Martin, asking for a report back at the April 20, 2021 FBCC Regular Meeting:

Vice Mayor Len Kreger said that many of these action items are already in process and invited the City Manager to elaborate.  City Manager Martin said that ads have been placed to hire more staff to lessen throughput time for permits.  He also said that work is underway to determine if more of the processes can be done concurrently to speed up the process.  There is a fee study that has been recently completed and is before the Commission for consideration.  “You can change fees any time,” Martin said.

Martin said that customer service training is being explored for all City staff.  Lednovich asked if Martin could investigate whether there is customer training specifically targeted to Building Department people, and Martin agreed to do so.

Martin asked Commissioners to schedule one-on-one meetings with Building Official Stephen Beckman on some of the challenges confronting the Building Department.

Looks and sounds like the commission’s members did nothing but kick the can down the road . Amazing that the data and survey spoke volumes to a real problem but, commissioner’s somehow tried to twist the reality into a positive. Politics at it’s Finest.

Hi Suanne, This is real good write up summary of the meeting. One question on the chart above. What is the time frame of the chart? Was it for 2020?

Thanks for your comment, James. According to the Chamber, the “Projects were indicated by period from current to 2018 or before.” Participants were not randomly selected from permits issued/denied over a specific period of time. Rather respondents self selected to provide input.