The March, 2021, edition of the Amelia Islander magazine features a cover photograph of several community residents on the steps to the entrance to the Peck Center. That photograph is tied to an article inside the magazine about those and other residents and their association with the Peck center. The article was written by Ms. Mandy Haynes.

A general overview of the building is provided by the editors, Philip and Deana Basile Kelly. Peck School was the successor to Colored School No. 1. The Peck School was a Rosenwald School, part of a nationwide early twentieth century program inspired by Booker T. Washington (Principal; Tuskegee Institute) and Julius Rosenwald (President; Sears, Roebuck & Company). Their leadership and funding contributed to the construction of over five thousand schools and auxiliary buildings for African American children in the South.

Dr. William Peck, the principal of Colored School No. 1, led the local effort to raise the necessary matching funds for the new school. For his efforts, Colored School No. 1 was renamed Peck School in 1911 and, when the new building was completed in 1927, the name was transferred. The school was closed in 1976, and ownership was transferred from the Nassau County School Board to the City of Fernandina Beach in 1989.

The building, now known as the Peck Center, has received numerous State grants and significant City funding, received the prominent historic marker at its front entrance in 2016. The facility currently houses the offices of several local nonprofit organizations as well as some City departments- Code Enforcement, Finance, Fire Administration, Information Technology, and Legal. The auditorium and gymnasium are used for various community events.

The Peck School/Center is more than a grand structure, and Ms. Haynes article shares the stories of the children and young adults that studied in that building. Her story brings the Peck School to life through the eyes of people, several of which remain an integral part of the Peck Center community and the City.

Last week, at their request, I welcomed Ms. Haynes and Mr. Neil Frink to City Hall to discuss how to move onward from the enhanced awareness of the Peck Center generated by Ms. Haynes article. The City has invested tens and hundreds of thousands of dollars to restore and renovate the building, including hundreds of windows, new doors, and is currently seeking additional State funding to support a $1.5 million brick/mortar repointing effort. That building is an incredible asset to this community. Unfortunately, many area residents are unfamiliar with its role in the history and fabric of the Fernandina community.

Ms. Haynes and Mr. Frink expressed a desire to once again bring people back to the Peck Center. The people would be represented by photographs (similar to the many that accompany Ms. Haynes article) and plaques to reflect and reinvigorate the spirit of the golden age of the Peck School. Somewhat related to the current funding request to support the repointing effort is another request to enhance historic displays at the Peck Center. 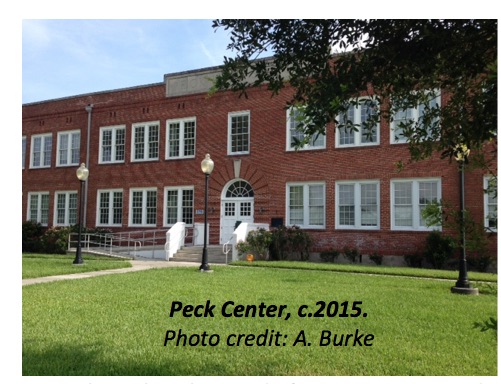 Other people who played a prominent role should be recognized such as Mr. Washington and Mr. Rosenwald. Dr. Peck should have a place of high honor. Mr. Frink shared his enthusiasm for this renewed effort, again, inspired by the work of Ms. Haynes. I offered my strong support to their efforts.

I will work with Mr. Frink and others similarly interested to develop an appropriate style to bring some of that life back to the halls and classrooms of Peck School. We will gather photographs and stories to add to the memoirs collected by Ms. Haynes and others. The goal is to begin this effort immediately and unveil the fruits of the project next February- only ten months away. It should be a busy and exciting effort.

I encourage you to read Ms. Haynes article. If you cannot find a copy of the magazine, it is available online at www.ameliaislander.com. If you wish to be a part of this reinvigoration effort, please contact me via email ([email protected]) and I will share your interest with Mr. Frink and other leaders of this effort.

The Peck Center is an overlooked treasure among many of other Fernandina treasures. I believe that its role in this community and the people it served deserve to be more appropriately heralded.

We’re excited and ready to get to work! Thank you for your support. Peck High School has an incredible history and we are fortunate to have so many former students who want to share their stories. It’s time to hear them.

Thank you Dale for acknowledging Mandys hard work. It was a labor of live for her, I know.