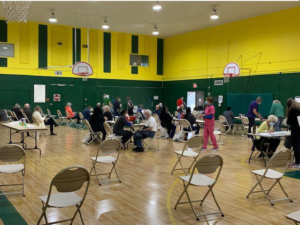 Former Florida governor and now U.S. Rep. Charlie Crist, D-St. Petersburg, is pondering a 2022 gubernatorial run and sounding very much like a candidate with Sunday’s call for a federal investigation into potential rival, Gov. Ron DeSantis.

“I write with concern about reports that Florida Gov. Ron DeSantis is establishing coronavirus vaccine distribution and administration sites to select locations to benefit political allies and donors, over the needs of higher-risk communities and existing county waitlists,” Crist wrote in the letter, posted on Twitter.

“In several cases,” he continued, “these sites seem to be targeted to wealthy communities with whom Gov. DeSantis has clear political connections, allowing some to skip to the front of the line in counties with existing waitlists.”

Under the program, DeSantis directed 3,000 Moderna vaccines to be administered in two Lakewood Ranch zip codes, which just happen to be Manatee County’s most affluent zip codes.

DeSantis on Feb. 16 acknowledged his office worked with Lakewood Ranch developer Rex Jenson, a notable Republican donor who Crist maintains has contributed $900,000 to DeSantis’ campaigns, in coordinating the outreach.

“So far, over 30,000 Floridians have died and at least 1.8 million more have gotten sick, with minority communities and seniors hit the hardest,” Crist wrote. “Instead of prioritizing people most at risk, the governor has chosen – during the worst pandemic in a century — to help out his friends and donors.”

DeSantis said directing vaccines through Jensen to reach eligible seniors is no different than working with Black churches, synagogues and mosques in South Florida to reach underserved populations under the “community pod” program.

“In every community we’ve done, when we go to senior heavy communities, people appreciate it,” DeSantis said, noting state Department of Health (DOH) officials examined counties statewide where a lower percentage of seniors have received the vaccine and coordinated outreach.

He said there are “community pods” in Sun City Center, Delray Beach, The Villages and Pahokee, a Lake Okeechobee community among the state’s poorest zip codes.

The governor sparked more furor when he appeared to imply there would be repercussions for critics.

“There are going to be folks who complain about getting more vaccine. But I’ll tell you what,” he said, “I wouldn’t be complaining.”

State Agriculture Commissioner Nikki Fried, Florida’s only statewide-elected Democrat who is expected to be among party hopefuls gearing up to challenge DeSantis in 2022, wasted little time chastising her potential opponent last week.

“There is no reason that Gov. DeSantis should be rationing vaccines based on political influence,” Fried said. “This is troubling and potentially illegal.”

Crist, also pondering a 2022 gubernatorial run or, perhaps, a run for U.S. Sen. Marco Rubio’s seat, served from 2007-11 as Florida’s Republican governor. He did not seek a second term and in December 2012, he registered as a Democrat.

Crist has been serving as a St. Petersburg-area congressional representative since 2017, winning a third term in November.

“Time and time again,” he wrote, “Gov. DeSantis has proven he is not up to the task of leading our state out of this pandemic as he continues to play politics with the health and well-being of vulnerable Floridians. I request (the DOJ) determine if the governor’s blatantly political vaccine distributions, which did not seem to be in the public’s best interest, violate federal law and merit a full federal investigation.”