Covid restrictions did not put off the many Fernandina Beach residents who gathered at City Hall on February 16, 2021 to honor outstanding community leaders during African American History Month.  The Elm Street Sportsman Association (ESSA), in recognition of African American History Month, presented plaques honoring the late Mayor Charles L. Albert Jr. and Vice Mayor­/Commissioner Ms. Patricia Thompson.  They also presented City leaders with a plaque acknowledging City support in the association’s efforts to provide food to the needy during the covid crisis.

Founded in 2014, ESSA is a 501(c) (3) not-for-profit organization whose mission is to address the social and economic needs of citizens in the local community while working to guide, foster and support youth towards STARS (Striving To Achieve Real Success).  ESSA has improved and contributed to a better quality of life for hundreds of children and their families.

Rev. Thompson presented the ESSA lifetime achievement award posthumously to the family of Charles L. Albert, Jr.  He characterized the late Mayor Albert as “an extraordinary leader who led people from where they were to places they could only dream of.”  Albert served as the first Black Mayor since Reconstruction.  Mrs. Ernie Tyson Albert thanked the Commission on behalf of her late husband. She said that she had no idea he was so well known throughout the community.  “I wish I had words to say, but I just can’t express it all,” she said.  “But you have been a wonderful City, a wonderful community, and I appreciate everything that you have done.”

ESSA President Lawrence Albertie delivered a plaque on behalf of ESSA honoring the former Vice Mayor/Commissioner Patricia Thompson.  He recalled early experiences with Ms. Thompson growing up in Fernandina Beach, jokingly calling her a “pest” because she always wanted to  play ball with the boys.  “But she held her own,” he said.  In presenting her with the plaque Albertie recognized her as the first Black woman to run for office and the first and only to be elected Commissioner and Vice Mayor.

“I speak on behalf of Patricia Thompson, who is being honored during Black History Month.  As Vice-Mayor and Commissioner, Ms. Thompson not only represented the Black members of our City, she also represented women.

“Ms. Thompson has served the entire community in so many ways over most of her lifetime.  Volunteerism is her modus operandi, from age 14 to the present. Fine examples include mentoring younger and older members of the community, serving as NAACP Local Chapter President for 20 years, and advocating for the welfare of the Black community when the 9th Street Project was proposed three years ago this month.

“I join the City Commission in honoring Patricia Thompson for her many years of service to the City and the Black community.”

Mr. Mike Kegler recognized Ms. Thompson with a certificate acknowledging her historic community activism and personal mentorship.  He likened her to a “Dahomey Warrior Queen,”  calling her “charismatic, respected and an honorable leader as well as a civil rights champion.”

Kegler also presented a certificate to Mrs. Albert honoring the late Mayor Albert. “Charles Albert was a trailblazer and pillar of the community,” he said.  “There were not many lives that were not affected by his grace,  his calm demeanor, thoughtful and caring leadership and ‘let’s make it happen’ attitude.”

Patricia Thompson delivered wide-ranging thank yous to people and organizations.  She said, “Everybody can be great because anybody can serve.  You don’t need a college degree to serve.  You only need a heart full of grace generated by love.  I thank all of you for your generosity.  I will continue to keep Black History alive by being a part of it.  Our lives begin to end when we become silent about things that matter.”

Elm Street Sportsman Association representative Wayne Peterson presented Mayor Mike Lednovich and Vice Mayor Len Kreger with a plaque in recognition of the City’s commitment to assisting ESSA in providing ongoing financial and food provision assistance to the community during the pandemic.  “When this pandemic first hit, it was something else,” Peterson said.  “[ESSA] in partnership with Trinity Church passed out food from Farm Share to over 400 people.  The City was gracious enough to let us use the Rec Center.  We want to give our thanks to the City and the Commissioners for helping us out.”  He went on to say, “You have helped us improve the lives of others and to reach those in need.”

Mayor Lednovich thanked ESSA but stressed that while the City provides the facilities, “[ESSA] does all the work.  They organize, they raise funds, they distribute food.  Our thanks go to you for being an integral part of our community, because you make Fernandina, Fernandina.  Thank you so much.”

Vice Mayor Kreger called ESSA, “The pillar of the community.  You were so before the pandemic, and even more so now.  Second Saturday of every month you are out there distributing food.  You just do an outstanding job.” 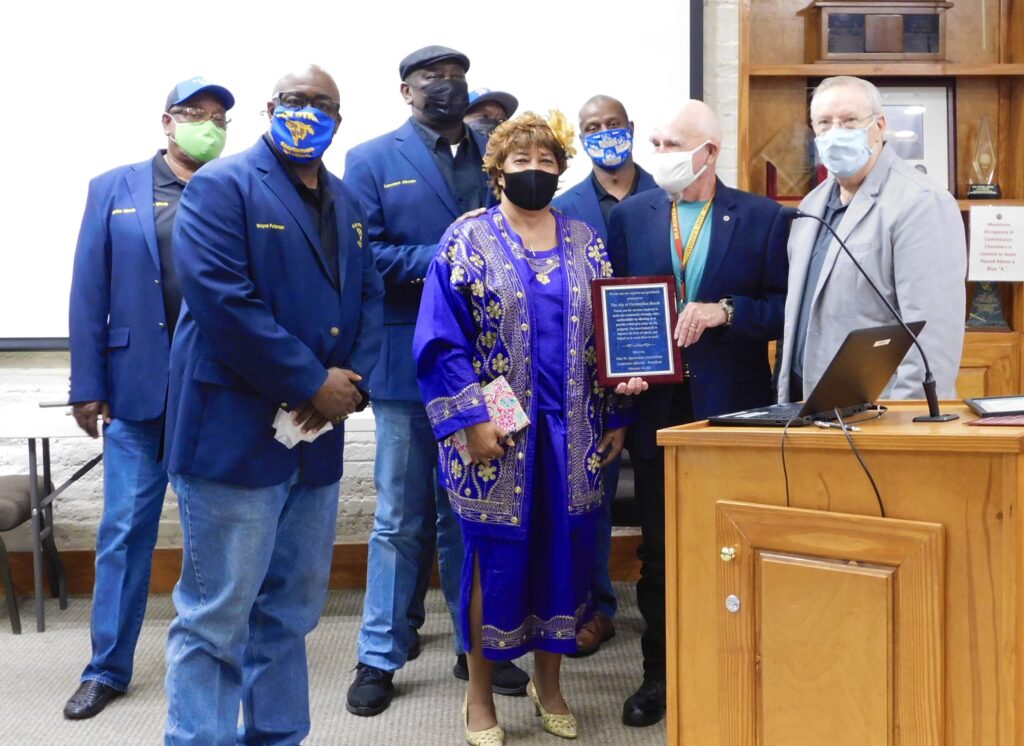