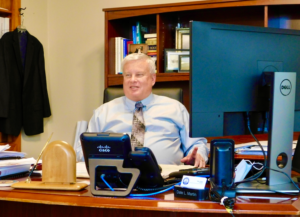 Recently Fernandina Observer Editor Susan Steger and I sat down with Fernandina Beach City Manager Dale Martin for an informal chat about the state of the City. Martin, who has recently completed five years as the City’s chief executive, continues to express his enthusiasm for his job and his confidence that the City will continue to make progress in addressing long standing problems relating to deferred maintenance, the downtown waterfront, and returning the City Marina to full operation in 2021.

When the City conducts its annual goal-setting session in January, two new commissioners will have replaced John Miller the longest serving commissioner who term limited out after 7 years in office and Phil Chapman who declined to run for a second term. Miller, who also served as Mayor for 3 of the past 4 years, has been replaced as Mayor by Commissioner Mike Lednovich during the FBCC’s reorganization meeting on December 15, 2020.

Under Martin’s leadership, the City has experienced a variety of changes, some more subtle than others. From a media perspective, the City has become much more transparent. The City has established a presence on social media, including Facebook, Instagram, and Twitter. Meetings of not only the City Commission, but also of advisory boards are live streamed and closed captioned. Full agenda packets are available online days in advance of FBCC meetings.

Early on in his tenure, Martin began his practice of providing a weekly column to local media. This column has helped the community get to know him better and helped him communicate facts about many important City projects and plans that are sometimes inaccurately presented on social media.

In order to further educate the public on how municipal government works in Florida, Martin has regularly offered his Government Academy through the Nassau County Council on Aging. Many people, keen to better understand why government does or does not “work like private business,” have taken these classes.

But despite the best efforts of Martin, City officials and local media, many people still do not seem to understand how government works. When we asked Martin what his biggest frustration is as City Manager, he replied after some thought, “The unfamiliarity of some citizens as to how local government operates.” He expressed regret that Facebook and other social media appear to dominate “the news,” leaving the government and responsible local media in the position of trying to overcome erroneous rumors with facts. Martin disagreed with the comment that most citizens don’t care, instead indicating that they are likely satisfied with most programs, services, and the direction of the community. “That doesn’t mean,” he added, “that opportunities to improve cannot be explored.”

Martin is extremely proud of the City workforce, pointing to the good work done by workers who have been with the city for many years and recent hires. Under his direction, new hires have assumed leadership of many departments: Airport, Building, Finance, Grants, Human Resources, and Stormwater. But Martin acknowledges that the City has also lost years of experienced leadership and service with retirements over the last 5 years. Most recently, long time Utilities Department Director John Mandrick retired. His function has been taken over by Mr. Charles George, designated as the City Engineer, who also serves as project engineer for significant activities that cross department lines, such as the downtown waterfront.

In addition to citing City staff, Martin also praised the City Commissioners who have worked hard over the past 5 years to put aside any personal differences to move the City forward. “Despite differences in approaches to problem solving,” Martin said, “most of the decisions coming out of this recent Commission took the form of unanimous votes. These Commissioners were determined to address long standing problems, like opening the Alachua rail crossing, waterfront resiliency and improving the downtown waterfront. While progress has not necessarily been as fast as they or the public wanted, they have continued to “move the ball down the field.”

Martin also cited progress in the areas of conservation, attributable to public demand expressed through their elected commissioners and a successful voter referendum, which strengthens the City’s commitment to preserving recreational and conservation lands via a charter amendment. Also, after many years of debate and controversy, the City has opened a new airport terminal, which has been well-received by the flying public.

In looking to the future, Martin expressed hope that intergovernmental relations will continue to improve. He said that on the staff level, City and County staffs have been working well together. But frustrations in dealing with the Ocean Highway Port Authority continue. Martin noted that a successful Port operation can be a key economic asset to the City if the elected boards can work out their differences.

Other areas that will require attention in the near-term relate to City facilities. The City has invested significantly to improve the Peck Center Building. However, to prevent significant damage from water intrusion, the brickwork needs repointing. The City is pursuing a grant to help in that regard. The Atlantic Avenue Recreation Center, built in the 1950s, needs attention, as does City Hall, which has been remodeled significantly since its construction over a hundred years ago, to accommodate modern office needs and requirements of new technology. A new fire station is being planned to better serve developments and newly annexed areas in the southern part of the City as well as the Airport.

Another area the City must address in the near future is accommodating growth in Bosque Bello, the only municipal cemetery. The City will jump start stalled plans to build a columbarium to reflect new burial practices and extend the physical life of Bosque Bello beyond its current space set to expire in 2025-27.

“For a ‘small’ city, Fernandina Beach has many things going on. It is sometimes difficult to keep the attention of Commissioners and the community focused on stated priorities before jumping into additional projects,” said Martin. “Nonetheless, it is certainly worth recognizing that while styles differ, everyone desires a strong and vibrant community.”

City Manager Dale Martin can be seen regularly out and about in the community. He actively participates with the regional Florida Council of Cities and serves on Nassau County’s Veterans Court. He is an active member of the First Presbyterian Church.

He and wife Lisa, who works for the Nassau County Council on Aging, continue to express their joy at living and working in Fernandina Beach. “This is a wonderful, special place,” Martin said, “and our happiness in living here grows with each year.”