Gov. Ron DeSantis was at Tampa General Hospital (TBH) Monday as a 31-year-old emergency room nurse became one of the first Floridians to be inoculated with Pfizer’s COVID-19 vaccine.

“Today, we will have shots going in arms,” DeSantis said, noting he “had the privilege” to sign the Federal Express delivery receipt when 20,000 doses arrived Monday on TBH’s landing dock.

“We’ll have health care workers getting vaccinated much faster than anyone could have anticipated six months ago. God bless America,” the governor said.

TBH was one of five Florida hospitals to receive 100,000 doses of the Pfizer vaccine Monday and Tuesday. By week’s end, the state’s Department of Health (DOH), CVS and Walgreens will have 80,000 doses for distribution in nursing homes and long-term care centers. 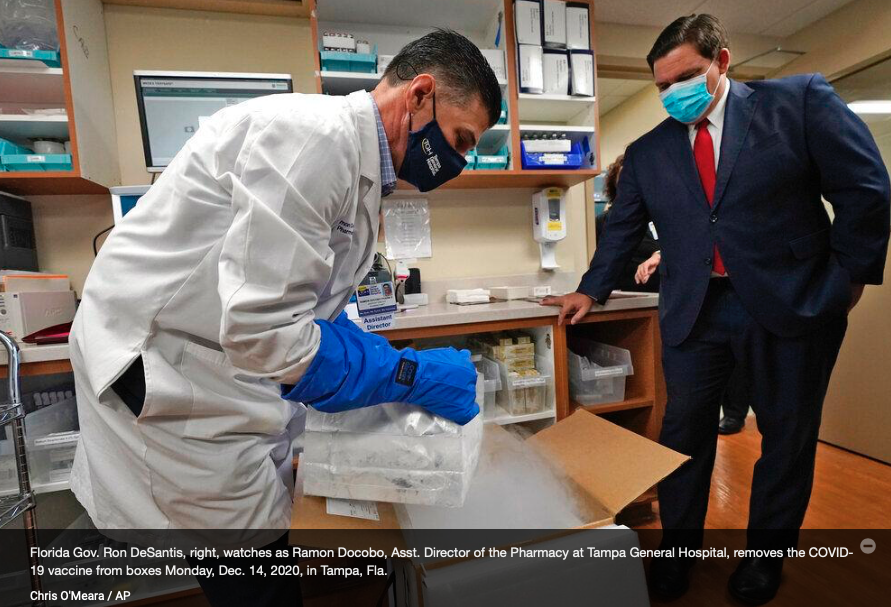 DeSantis called the vaccine’s arrival an “historic” achievement, adding he expects Moderna’s vaccine to be approved by week’s end with 365,000 doses in Florida by Christmas. In all, he said, up to 1 million doses could be distributed statewide by late December.

DeSantis departed TBH without responding to questions about a White House Coronavirus Task Force report his office refused to publicly release that contradicts his pandemic response as “science-based.”

The task force’s weekly reports are sent to governors and routinely publicly posted except, apparently, in Florida, according to the Center for Public Integrity, which obtained and published the report Saturday after the Governor’s Office refused to release it to the media.

In the report, the task force defines Florida as “a red zone” and declares its strategies must change, “including the implementation of key state and local policies with an additional focus on uniform behavioral change,” such as requiring face masks, physical distancing, hand washing, as well as “preventing gatherings outside of households and more aggressive testing.”

The report calls for significant reductions in capacity limits for closed-indoor gathering spaces, like bars and restaurants.

DeSantis has dismissed such strategies as being espoused by “flat-earthers,” preempting local governments’ from enforcing pandemic-induced restrictions on businesses and dismissed criticism as “all political.”

“The governor has been consistent since the beginning of the pandemic,” Governor’s spokesman Fred Piccolo Jr., said in a statement last week. “Wash hands, maintain social distance, wear a mask, etc. But he’s also adapted to the data as it becomes available. He acted quickly to save thousands of nursing home residents. He knew of drugs in the pipeline and was ready to act for Florida when he knew they were coming online. He’s been consistent even as the pandemic has become political.”

The task force concludes with a stern warning for Florida about holiday gatherings as December unfolds. “Florida has seen … unrelenting community spread and inadequate mitigation,” it states.

The Orlando Sentinel and South Florida Sun Sentinel last week sued to get the Governor’s Office to release task force reports. The lawsuits are the most recent in a series of disclosures questioning DeSantis’ motivations.

This would be good information if you would leave out the left slant regarding the Center for Public Intregetity. It took me about three minutes to find that this is part of a George Soros, funded Open Society entity. Come on John, if you are going to do a hit piece on Gov. DeSantis at least have creditable sources.

Mr. Smith attacks the messenger and not the message. The fact is that Governor DeSantis did bury the report, did order state officials to play down the severity of the pandemic, and did belittle scientists and health experts, all to the detriment of Florida’s citizens. DeSantis has been consistent alright, consistent in making the pandemic an opportunity to gain a perceived political advantage for himself. Now look at our COVID-19 hospitalization and death rates – higher than ever before and just getting higher. How immoral can one get?

Please do yourself a favor and run the actual data side by side from New York and Florida; it will open your eyes. Florida is a much safer place to be and we have chosen to move here. If you enjoy the policies of blue states I will be happy to switch homes with you.

I’ve read your comments week after week and was wondering what your agenda is? You don’t seem to see anything positive in living here, and complain incessantly. Why is that? Nevertheless, I wish you a merry Christmas and a happy new year.

Is Mark Tomes a real person? I could not find him listed in the Registered Voter File for 2018. I see no Facebook account for him that is obvious. We live in a world of smoke and mirrors.

Your research methods are lacking Ben. I suspect you started with registered voters because you paint anyone who isn’t Republican as unworthy of respect. It took me all of two minutes to find out that Mr. Tomes grew up in Fernandina Beach and devoted the better part of his life to helping college students with disabilities.

Mr Kurpiers – The registered voter list contains all party affiliations. Actually Democratic congresswomen Tulisi Gabberd from Hawaii, who is also a veteran who served in Iraq is admirable. I read she was shunned at the DNC. Tulsi did a great job of putting Kamala Harris on the spot at one of the debates.

Understood. But I question why anyone would need to look up someone’s party affiliation other than to pass judgment on their party of choice. If I were to wonder whether someone is real or not, there are a number of far more reliable sources I would use instead.

Mr. Kurpiers – I wasn’t interested in Mr. Tomes party affiliation. I was simply interested in whether or not he actually exists. I could not find him on 2018 Registered Voter list. I could not find a FB account that was obviously his. I did find a Mark S. Tomes in Fernandina on whitepages.com but the address was a PO Box and and the listed phone number was disconnected. Since he is involved with helping people with disabilities you would think if he was really serious about things he would have a web page or a FB page. I could find nothing. Go Figure.

Your logic is faulty. Nevertheless, his FB page was easy to find given the information I was able to cull from reliable Internet sources (as in, NOT registered voters). As for his work with disabled students, that was his career from which he has since retired. You owe Mr. Tomes an apology.

Mr. Kurpiers – you refer to “reliable internet sources” – that is extremely vague. How do you find his FB page? Curiously you have not shared that with us. I would still not be surprised if ‘Mark Tomes” was a troll operating as a fictitious person. So let me try to understand your logic – the Nassau County List of Registered Voters is not reliable? Is that what you are saying? Perhaps Mr. Tomes will share his Facebook page with us, but even then that does not guarantee his existence. After all, fictitious FB pages do exist.

Google “Mark Tomes” “Amelia Island”. You will find that he is a photo contributor to the Fernandina Observer. Along with his photos, a short bio is included. Then search FB for Mark Tomes. You will find that many of his photos that he shares with FO readers are also on his FB page. And when all else fails, use Intelius.com. This is easy stuff Ben. Far easier than twisting oneself into believing conspiracy theories. Again, you owe Mr. Tomes an apology.

Wow, I’ve called lots of things before, but never “not real.” I will reiterate my point: stop talking about the messenger and stick to the message. DeSantis and most of the Republican Party leadership have botched the response to COVID-19, and tens of thousands of people have died unnecessarily. (And by the way, many people, especially of the younger generation, are avoiding or getting off FaceBook entirely. And they are very “real”.)

Mr. Tomes. Maybe you are real. Mabye not. Haven’t see anything yet that really confirms your existence. Couldn’t find you on the registered voter list from 2018. Couldn’t find your FB page referred to by Mr. Kurpiers. But since we are on the subject of reality lets talk about a very important development in the state of Florida that relates to the reliability of the PCR test. Hopefully other states will follow Florida’s lead. DeSantis has ordered that testing labs reveal the number cycles at which each test is run.

Reportedly……..“Anthony Fauci himself has asserted that 35 cycles or higher makes the test result useless. Yet the FDA and the CDC recommend running the test at up to 40 cycles. This has opened the door to millions of false positives. “

The article was written by Jon Rappoport. It is titled “The real pandemic is an outbreak of PCR tesiting.”

Let us appreciate that Governor DeSantis is a critical thinker. We don’t want our taxpayer dollars going needlessly to the “industrial medical testing complex” do we? All the false hysteria and business shutdowns isn’t helping people either.